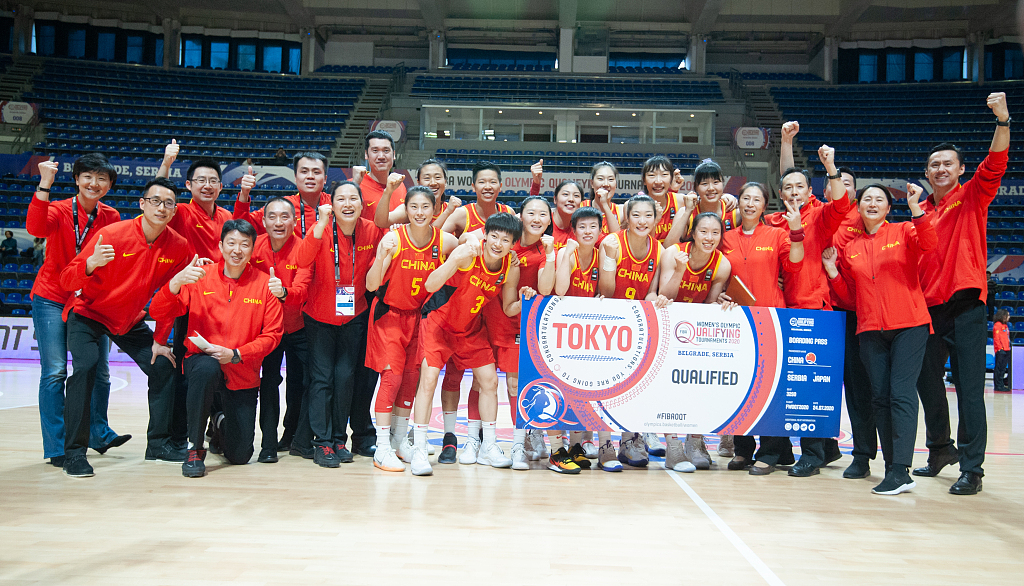 Players and coaching staff of China celebrate after winning the game against Spain during the FIBA Women's Olympic Qualifying Tournament 2020 Group B match between Spain and China in Belgrade, Serbia, February 8, 2020. (Photo: VCG)

China won World No.3 Spain 64-62 in the women's basketball Olympics qualifier in Belgrade, Serbia on Saturday. This means the team is now in the Tokyo Olympics.

China led 6-2 in the opening of the game. China's head coach Xu Limin called his first timeout after Spain reversed the scores 9-6 and pointed out straightforwardly that the Chinese players had a bit too many turnovers.

Spain had multiple chances under the basket, but struggled to convert them into scores. Nevertheless, they were leading 15-12 by the end of the first quarter.

China took the lead by 18-17 after Spain committed four fouls in the second quarter. For the Chinese ladies, the result against the World No. 3 team was promising if they could control their own turnovers and Spain's counterattacks.

China's Li Meng and Yang Liwei stretched the gap to seven points (28-21), enlarging the advantage for the team.

It was foreseeable that Spain would strengthen their offense in the second half, which they did, making it important for Team China to observe the opposing team and maintain stability.

Body contact increased. Spain's intensity on both attacking and defending ends increased also. Having struggled a bit with turnovers, Team China kept the sharp performance from the first half.

His attempt to cool down Spain's comeback was successful, as China expanded the gap to 15 points afterwards.

By the end of the third quarter, China led by 52-38. Spain had good steals, but failed converting them into scores. Neither team was efficient in three-pointers. Spain scored 1 out of 6, while China scored 2 out of 10.

Spain closed down the gap to 11 points when there was 6:43 left to the game. Top scorers in the team Marta Xargay and Alba Torrens became key targets for Chinese players to defend. The scores came to 55-48.

As Spain's morale grew, worries to be reversed within Team China on and off the court were cooled for a brief moment when Li Meng and Shao Ting made tough, decisive, and quick shots.

Dramatic as the game was, Alba Torrens of Spain scored two three-pointers, closing the gap to two points with less than two minutes left on the clock.

Another "and-one", and again by Torrens, Spain reversed the game 62-61.

China's head coach called yet another timely timeout, assigning tasks for players including Han Xu and Shao Ting, who later executed very well. The latter earned three points for China with a layup, and one of two free throws.

Spain missed three layups under the basket within ten seconds. The scores remained 64-62.

This qualifying tournament was relocated to Belgrade from Foshan, Guangdong Province, China due to the outbreak of coronavirus. The Chinese players dealt with the last-minute relocation, jet lag and all other problems, and claimed the victory.

China is in the same group with Great Britain, Spain, and South Korea, and has won the first two matches. China will face off South Korea tomorrow. Whether China wins the last match or not, it is guaranteed now that the ladies will be seen in Tokyo this summer, since the top three teams in this group would qualify for the Tokyo Olympics.