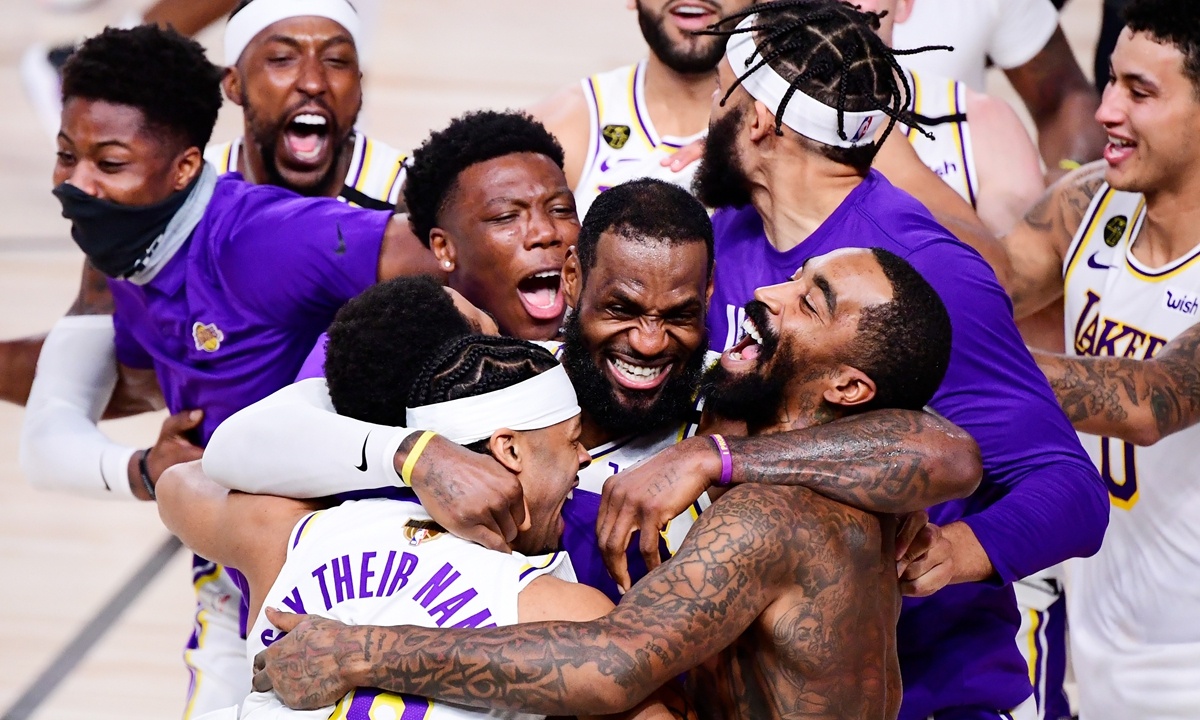 The Los Angeles Lakers have won the NBA championship crown, entering the hot search chart on China's Twitter-like Sina Weibo, with many Chinese fans congratulating the team and paying their respects to Kobe Bryant, the Lakers icon who died in a helicopter crash in January.

The Los Angeles Lakers defeated the Miami Heat 106-93 in Game 6 of the NBA Finals on Sunday night, winning the best-of-seven series four games to two, CNN reported on Monday

It's the 17th title for the franchise, tying the Lakers with the Boston Celtics for the most in NBA history. It was the Lakers' first NBA Finals appearance since 2010, said CNN.

The hashtag "Lakers wins championship" became a trend in China, ranking 4th on Weibo's hot search. Many Chinese internet users expressed their excitement and good wishes for the team's victory.

"As a huge fan of the Lakers, I can finally scream out 'Lakers won!' I was in senior high school when they won the championship last time and I have been waiting for 10 years," a Weibo user named "Xiao Zui Luan Wen" told the Global Times on Monday.

"Like many youths in China, NBA is more than just basketball. It taught me the spirit of never giving up and has influenced my life a lot," he said. "The championship is so valuable and meaningful this year because it gave people excitement, joy and hope amid the almost year-long gloom of the COVID-19 pandemic."

"Trending in China also shows the NBA has many hardcore Chinese fans despite the regrettable issues regarding cooperation between China and the NBA in the past," he added.

Besides congratulating the Lakers, many Chinese netizens also paid their respects to Bryant, who died in a helicopter crash on January 26, along with his daughter Gianna and seven others.

The hashtag "Kobe, did you see it" also entered Weibo's hot search chart and ranked 15th.

"This [winning the championship] is the best gift for Bryant. I hope he can see it in the other world. He will be missed forever," one netizen commented.

The NBA has been promoting itself in China for several decades, accumulating a large number of Chinese fans. China News Service indicated that the NBA's annual net profits were about $1.8 billion, of which  China contributed as much as $200 million, accounting for 10 percent.

In the 2017/18 season, views of NBA games reached more than 600 million, according to the official Chinese website of the NBA. A regular-season game in the 2018/19 season in China can attract 7 million viewers on average, but only 3.8 million in the US, said the Shanghai Observer.