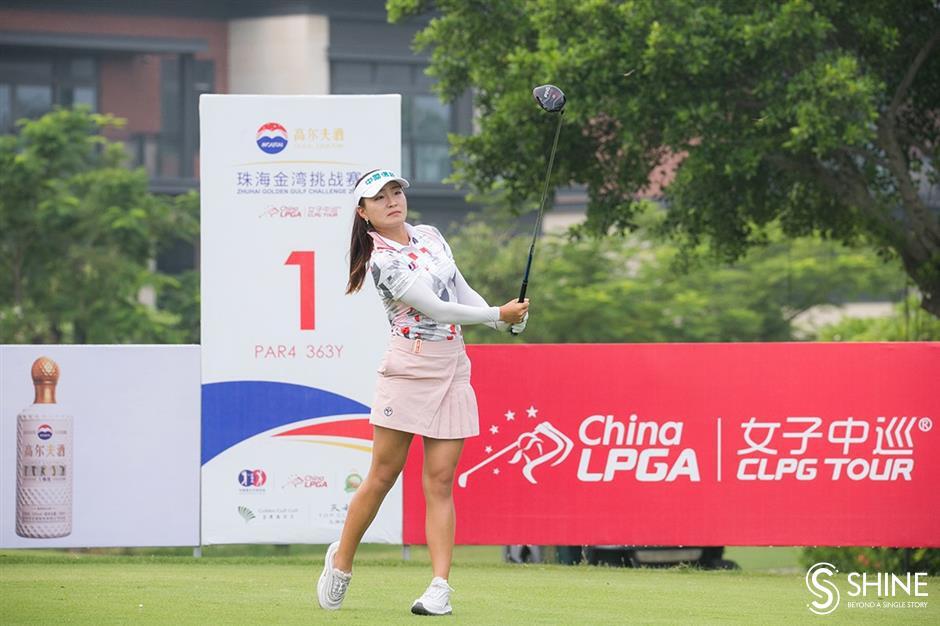 Defending champion Du Mohan moved to the top of the Golf Liquor Zhuhai Golden Gulf Challenge leader-board on Thursday when the Beijing native carded a 7-under-par 65 to take a one-stroke lead over Liu Yan (67) through two rounds in Guangdong Province.

In the second tournament of the China LPGA Tour season, Du was 11-under 133 through 36 holes at the Colin Montgomerie-designed Zhuhai Golden Gulf Golf Club.

Ren Yue (68) was fifth, one shot ahead of Zhang Junyuan (69), the top amateur in the field, at six shots off the pace.

Taking advantage of the soft greens following overnight rain, Du had a strong day off the tee and with her putter in reeling off eight birdies against a lone bogey at the 200,000-yuan (US$29,000) tournament.

The 18-year-old was already looking forward to Friday when she will play in the final group with Yin and Liu. Last week at Zhuhai Orient, Du lost to Yin by one stroke after leading the tournament with three holes to play.

"This is another steady round. My long game is great. I didn't hit any bad shots with the driver. I made some nice putts but still missed a couple. I will keep the same plan as today because it worked," said Du.

"I will play with Yin again. This is a great chance to pay back. No doubt I will try my best to beat her this time."

Liu, who like Du and Zhang Weiwei (71) has qualified for the US Women's Open in December, carded her second consecutive round of 67. Her day included four birdies, an eagle three at the 517-yard 17th hole and a bogey.

"I felt tight again on the back nine. The key point was the 16th hole where I had a chip-in birdie from 25 yards. With that momentum I had another eagle at the 17th hole and got myself into the mix," said the 22-year-old from Xiamen.

"Du is a great rival. Tomorrow, she is likely to make as many birdies as today. I wouldn't pay attention to her. I need to play my game. Hopefully I have the best start among the group and can put pressure on her early."

In improving by five strokes on Thursday over her opening round 71, Yin credited her score to a better performance off the tee. Her bogey-free round, her third in her last four rounds, included six birdies, five of which came on the back nine.

"My long game wasn't good since the last event. After the first round I sent my video to my swing coach. We worked together and finally figured out what's wrong. I played better off the tee. If I play to my standard tomorrow back-to-back wins are possible," said the 17-year-old who also won the CLPGA Tour Qualifying Tournament in January as an amateur.