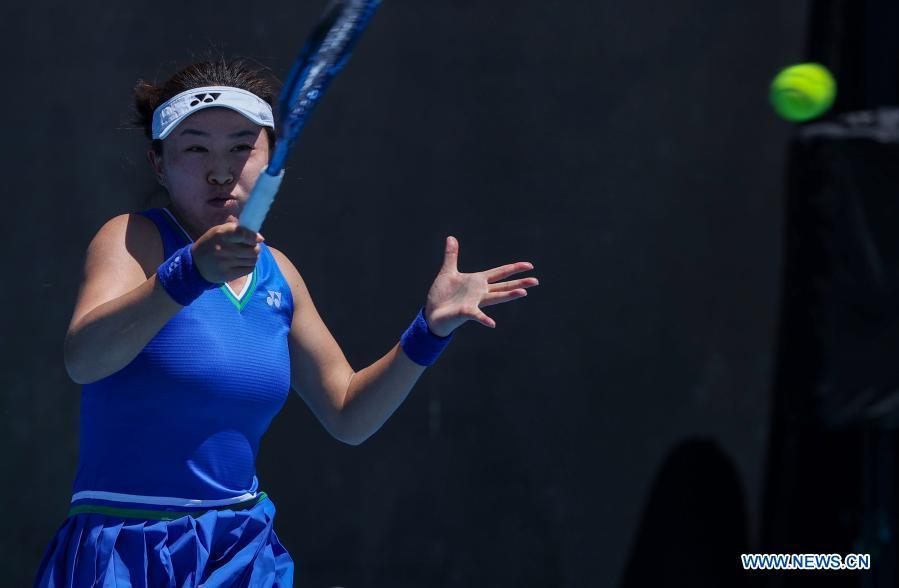 Zhu Lin of China returns a shot during the women's singles match against Whitney Osuigwe of the United States at the Australian Open in Melbourne Park, Melbourne, Australia on Feb. 9, 2021. (Photo: Xinhua/Bai Xuefei)

Day two of the Australian Open on Tuesday saw four Chinese players battling it out in first round match-ups, with Zhu Lin progressing, while Zhang Shuai, Wang Yafan and Zheng Saisai were all eliminated.

Wang and Zheng found themselves locked in three-set battles which each lasted well over two hours as the players endured heat and exhaustion.

"I'm super happy that I won this match. I think (Osuigwe) raised her level towards the end of the match so I'm really happy to win," Zhu told Xinhua in a post-match press conference.

After her match, a defeated Zheng told Xinhua she was disappointed by how she played on the day after trying to adjust her stroke for extra power.

"It's been a while since I've played a match with pressure. Last tournament I was actually feeling pretty good...and hitting clean shots where I want. But then after we changed some strokes, we tried to play faster and this made me miss a lot and start to lose some confidence so I think that's not a smart move before the big Grand Slam tournament," Zheng said.

Wang said she too could have played better and felt there were several turning points in the match where she had missed opportunities.

"I think there were actually two turning points in today's match. One was in the third game of the second set, and the other was at 4-4 in the third set, when the score was 30-30, there were two balls that are not too difficult, but I didn't handle them well," Wang said.

"I think if the two points can be played a little bit more finely, or if they can be adjusted a little bit better, they may have some influence on the result of the game."

The three defeated Chinese players will now turn their attention to the doubles format while Zhu prepares to meet Belgian Elise Mertens in round two on Thursday.