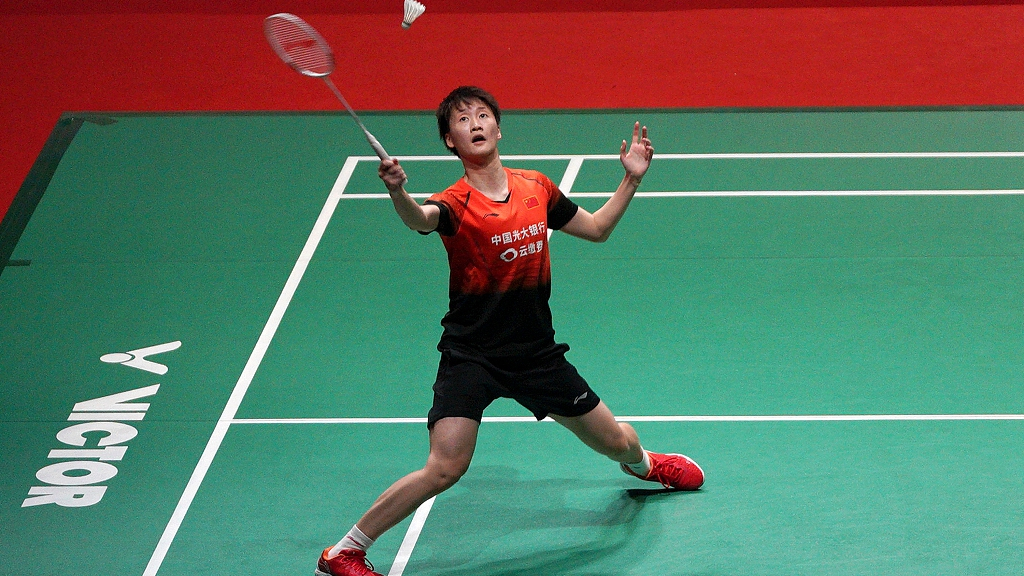 Chen Yufei of China in action during the women's singles final during the Malaysia Masters at the Axiata Arena in Kuala Lumpur, Malaysia, January 12, 2020. (Photo: CGTN)

China's shuttlers bagged three titles at the Malaysia Masters on Sunday after Chen Yufei added the women's singles championship to those of the women's doubles and mixed doubles, the finals of which were between Chinese pairs.

As the world's top women's singles shuttler, Chen dominated her opponent, Tai Tzu Ying of Chinese Taipei 21-17, 21-10 in a 37-minute match, with Tai blaming her frequent mistakes for the defeat.

Chen overtook Tai to become the world No.1 for the first time at the end of last year but said she was not particularly concerned about the rankings.

"It doesn't make you better by only ranking the first," she said, adding that she will try to keep her current momentum to maintain her confidence.

The Chinese duo was obviously upset about their performance. "We played very bad today," said Liu, "The shuttle was quick today, our opponents always held on to their positions in the front court and played proactively. It's a good lesson for us."

In the men's singles, Japan's world No.1 Kento Momota continued his dominance by defeating Viktor Axelsen of Denmark despite a serious challenge by the latter.

Axelsen almost came up from behind in the first set. He won a net play when holding a set point, but it was declared a foul. Momota then won the set 24-22. Axelsen could not keep his momentum in the second set, losing the match to Momota in straight games.