SPORTS Coach on China's bronze medal in FIBA 3x3 World Cup: 'We did our best'

Coach on China's bronze medal in FIBA 3x3 World Cup: 'We did our best' 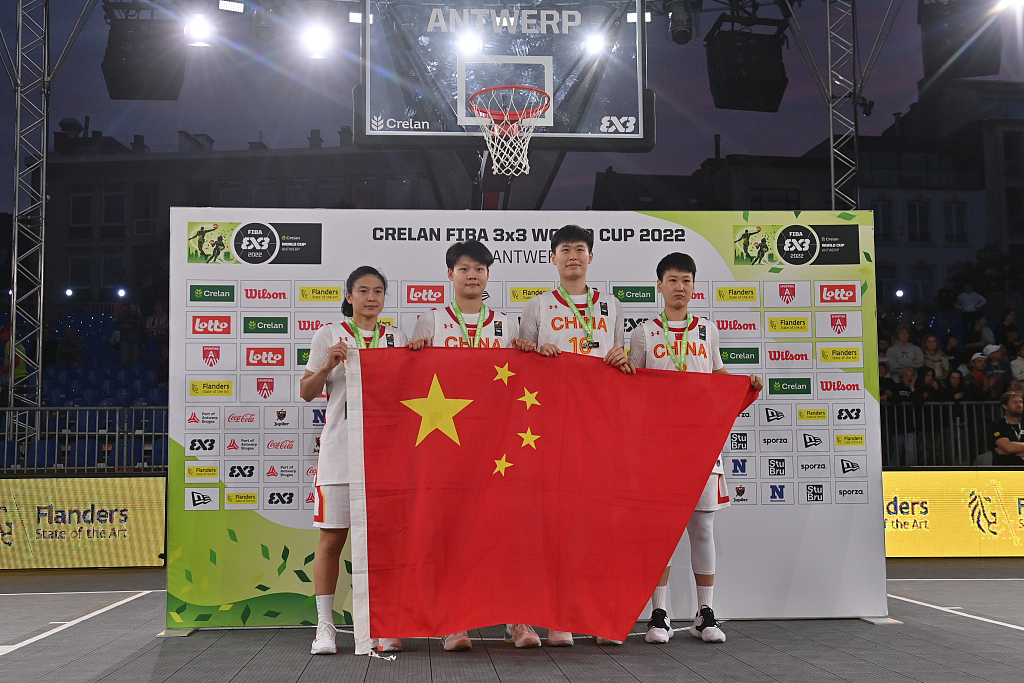 Chinese players pose with the bronze medals and their national flag after the third-place game against Lithuania in the FIBA 3x3 Basketball World Cup Women's Tournament in Antwerp, Belgium, June 26, 2022. (Photo: CFP)

Xu Jiamin, head coach of the Chinese women's national 3x3 basketball team, said her players did their best to pocket the bronze medal in the FIBA World Cup in Antwerp, Belgium in late June.

China first lost to France 17-16 in the semifinals on June 26. Then in less than two hours, they beat Lithuania 21-11 in the third-place game to finish their first major international tournament since the Tokyo Olympics in 2021.

"There were some regrets because we had the chance to win the semifinals," Xu told Xinhua News Agency. "But on second thought, that's what high-performance sport is. It is so contingent and uncertain. I believe my team has done their best."

However, Xu also wanted her players to learn their lesson from the result, both in pre-game preparations and actual competitions on the floor. China started slow in the group stage as they beat Romania but were upset by Japan on the first day of the World Cup.

"There were many problems that we should have found in preparations, but failed to do so because we had no time. As a result, we had to look for these problems in the games and improvise to solve them," Xu said.

Fairly speaking, Xu and her team didn't have enough time to prepare for the World Cup because she and one of her players Zhang Zhiting had been quarantined in Shanghai for a long time due to COVID-19 before joining the rest of the franchise. Moreover, a new member must be recruited to replace Yang Shuyu who joined the 5x5 national team.

Despite the various difficulties, Xu was convinced those are not excuses. Fortunately, her team continued to perform better in the World Cup to defeat Lithuania, Germany and Belgium to reach the semifinals.

"We will need to enhance players' individual skills when we go back, especially their ball-handling abilities," Xu told Xinhua. "Teams understand each other in international tournaments. Your rival knows exactly what you are going to do. That's when individual performance is to be tested. When your opponent do everything they can to contain your team, your player must be able to finish the game with individual skills. That's what we will try to improve in the future."

The Chinese national team went to Austria after the World Cup for a week-long training and resting. Then they will go to Singapore to participate in the FIBA 3x3 Asia Cup between July 6 and 10.

"We may face greater pressure next year and we will invest the most efforts to compete for Olympic qualification points. Of course, our biggest goal is the Paris Olympics in 2024," Xu said.