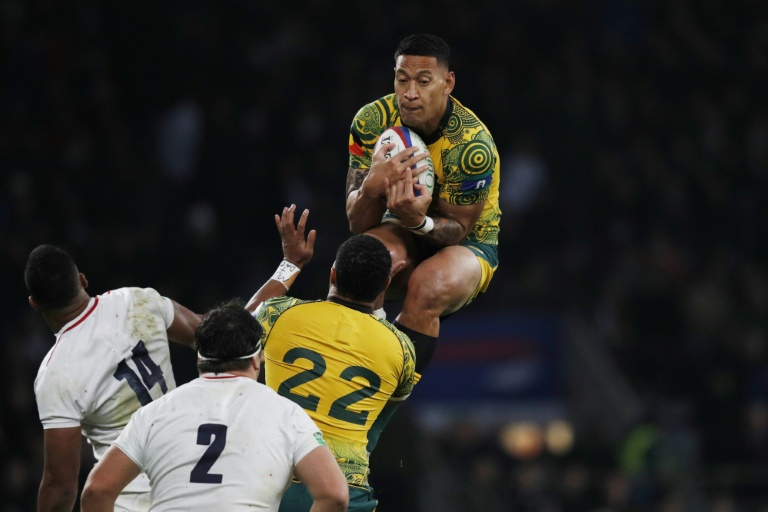 Folau, 30, an ardent Christian and former poster boy of Australian rugby, was fired in May by Rugby Australia over a social media post warning "hell awaits" gay people and others he considers sinners.

The former dual-code Australian international said in a statement released by the Dragons, the only French club playing in the Northern Hemisphere’s 12-team Super League, that he would not be making any further comment on the furore that has seen him end up in France.

"I'm a proud Christian, my beliefs are personal, my intention is not to hurt anyone and I will not be making further public comment about them," Folau said.

"I look forward to my return to the great game of Rugby League with the Catalans Dragons," he added.

The Perpignan-based side's chairman Bernard Guasch said they did not support or agree with Folau's "previously expressed and controversial views which are based upon his sincerely held religious belief".

"We want to give Israel a new opportunity to shine on the pitch," he added.

Guasch stressed that the Dragons "do not share or condone those views and we are totally committed to our club and our sport being open and welcoming to everyone."

Folau reverts to the league after reaching a settlement with Rugby Australia in December over the multi-million dollar lawsuit he had lodged over his sacking.

While he was told he could not return to play league in Australia, the Rugby Football League, the sport's governing body in Britain, confirmed it could not block the player joining Dragons.

A statement said: "This is a difficult decision, as the RFL places a high value on the sport's reputation in prioritising inclusion and diversity -- and deplores the player's previous comments.

"However the moral responsibility for deciding whether to sign a player sits with individual clubs. The player has not been charged or found guilty of any criminal offence.

"However distasteful his previous comments, we don't believe that, under our current regulatory framework, these can prevent his participation in the sport."

"I'm shocked and disappointed at the signing of @IzzyFolau," Hirst said on Twitter. "Our great game is tasked with fighting against homophobia and standing up for the values it puts such high stock in.

"It shows none of the bravery, camaraderie or integrity @rfl expects from its players, staff, and fans."

Super League's executive chairman Robert Elstone said it "deplores the homophobic comments Israel Folau has made in the past, which squarely contradicts our sport's core values."

Elstone continued: "I have sought the opinion of informed voices connected to our game and the majority share my disappointment that one of our clubs has chosen to sign him.

"There is a strong feeling that the decision to sign him lets down many people connected to our sport.

"I made Catalans Dragons aware of those views.

"However, Super League does not have the authority to veto the registration of players and is satisfied by the due diligence carried out by The Rugby Football League."

The man at the centre of the storm could turn out for his new employers as early as Saturday against Huddersfield.

In December's surprise settlement both Rugby Australia and the player apologized for "any hurt or harm" caused as they released a joint statement after two days of mediation aimed at avoiding a drawn-out and expensive court case.

And Elstone said "strict guidelines are in place" preventing Folau from ever repeating such comments.

Any repetition would lead to his sacking and a "substantial fine" for the Dragons.

Meanwhile, Wigan demonstrated their opposition to the signing by announcing their round six matches against Dragons would be named Pride Day.

The Warriors say their players will wear Rainbow socks and laces for the game on Sunday, March 22 and will invite LGBTQ+ groups.

Wigan executive director Kris Radlinski said: "Here at Wigan Warriors we are committed to the core values of inclusion and respect."

After a distinguished league career with Melbourne and Brisbane Folau briefly turned to Australian Rules before switching to Rugby Union.

He made his international debut and scored a try against the British and Irish Lions on their 2013 tour.