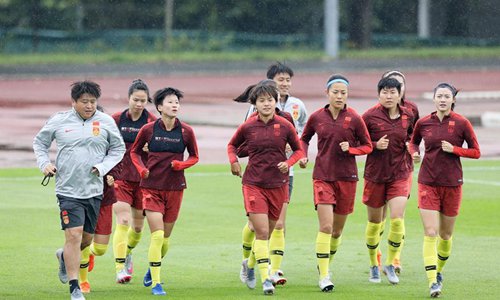 The spread of the novel coronavirus in China has forced millions of Chinese to avoid public spaces as Chinese sports teams have started training indoors.

One of the more inspiring and recent sports stories to come out of China is the national women's football team. The team qualified for the Asian playoff round for the 2020 Tokyo Olympic Games, an achievement made during rough conditions.

The qualifying matches were originally scheduled to take place in Wuhan - the epicenter of the novel coronavirus - where the Chinese team was meant to enjoy home field advantage prior to the outbreak.

After the matches were relocated to Australia, the Chinese team and personnel were quarantined for eight days at a hotel in Brisbane upon their arrival.

Star forward Wang Shuang and other players from Wuhan could not go as they were quarantined at home.

A lack of key players and fitness issues often result in poor performances, but the Steel Roses have proved that team efforts thrive, netting 12 goals in three games, including one against Asian No.1 Australia.

Similarly, China's women's basketball team had to move their home court games to Belgrade, Serbia, and have since proved they are capable of qualifying for the quadrennial event, securing three consecutive victories  in the qualifiers.

Previously, Chinese fans worried that athletes who appeared on reality shows to boost their reputations ended up playing poorly, but now the virus helped diminish such distractions.

China's national judo team, who were scheduled to compete in France and Germany for ranking points to qualify for the Tokyo Olympic Games, had to forgo the competitive events because they couldn't apply for visas.

Other teams have started training overseas, including the national table tennis team who are in Qatar after winning two golds at the recent ITTF German Open.

Before the outbreak, China's national taekwondo team was already scheduled to train in Shizuoka, Japan, to help the athletes adjust to daily life in Japan. Coincidently, it also helped the team avoid the virus.

Chinese Super League side Wuhan Zall, though not having an Olympic mission like national teams, are also training overseas.

Currently, in Spain, the team has vowed to inspire the virus-hit home crowd with quality play during the new season.

In their debut season in China's top-tier league in 2019, they finished  sixth. For the upcoming 2020 season, they have every reason to move up as an entire nation stands behind them.