Just in time, Carlos Correa and the Houston Astros broke out the bats. 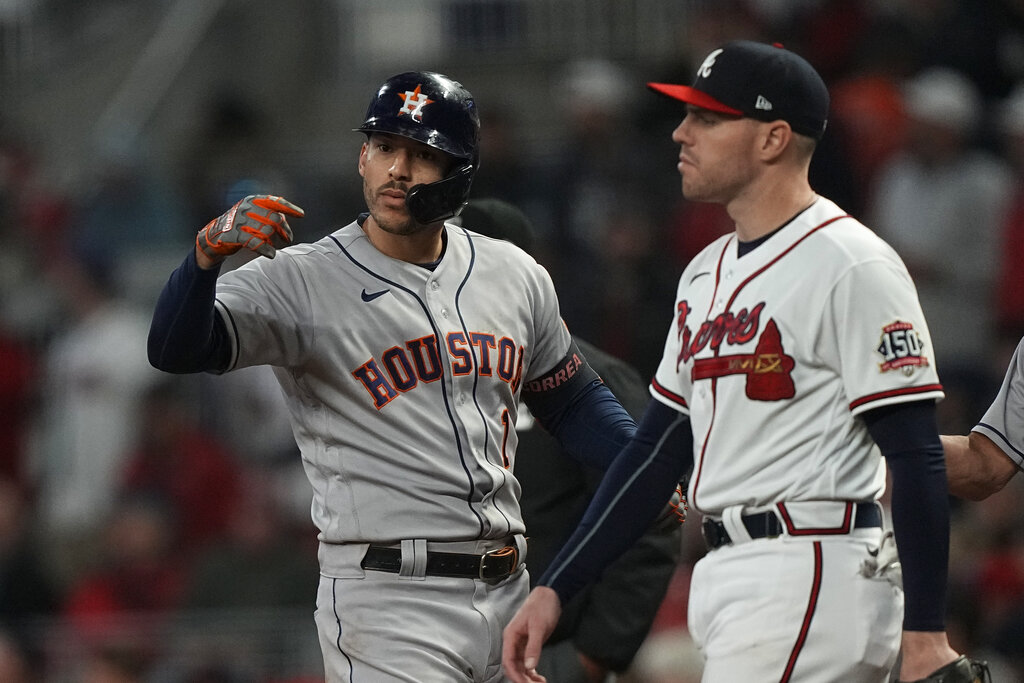 Houston Astros' Carlos Correa celebrates his RBI single during the eighth inning in Game 5 of baseball's World Series between the Houston Astros and the Atlanta Braves Sunday, Oct. 31, 2021, in Atlanta. (Photo: AP)

Because if they had waited any longer, this World Series would’ve been over.

Staggered by Adam Duvall’s grand slam in the first inning, Correa and Alex Bregman ended their slumps in a hurry. They kept swinging, too, refusing to let their season slip away and rallying past the Atlanta Braves 9-5 early Monday to cut their Series deficit to 3-2.

The Braves might not admit it was a deflating defeat; 66-year-old manager Brian Snitker is too steady and savvy for that. But by any measure in the Analytics Age, this had to sting.

“I’m just glad we get to go back to Houston. That was our goal today,” Astros skipper Dusty Baker said.

Correa came through with three hits after getting moved up to third in the lineup for Game 5 while Bregman was dropped to seventh. Martín Maldonado found three different ways to drive in runs and pinch-hitter Marwin Gonzalez blooped a two-out, two-run single in the fifth for a 7-5 lead.

A matchup of bullpens turned into the first high-scoring game of this Fall Classic, and the highest-scoring team in the majors this year won it.

Couldn’t hold down the Astros forever, a parade of Braves pitchers found out as the clock passed midnight and the calendar flipped to November.

"We’ve got a clubhouse full of bad dudes in there. And our lineup is very deep,” Correa said.

Correa gained attention earlier this postseason for marking big hits by pointing at his wrist, where a watch might be. His time, he said.

The star shortstop doubled and singled twice, driving in two runs. His RBI single in the eighth padded the lead and as Jose Altuve got congrats in the dugout after scoring, the Fox TV mics picked up someone on the bench yelling “It’s time!”

A night earlier, the Astros went 0 for 8 with runners in scoring position in a 3-2 loss. That left Correa at 2 for 14 overall in the series and Bregman worse at 1 for 14.

“Before the game we talked and we said, `We’re not gonna give up,’” Correa said. “We’re gonna go out there fighting.”

Atlanta had been 7-0 at home in the postseason, and a boisterous crowd inside Truist Park and packed plaza outside came early hoping to celebrate its first championship since 1995.

“If we win the World Series, it doesn’t matter where it is,” Snitker said. “I’d have loved to have done it in front of our fans. Hopefully, we can do it the next couple of days.”

Duvall’s slam sent a dozen Braves careening from the dugout, a full-out frenzy of hollering, twirling and dancing.

“We celebrated it. We got excited, and that’s what you do when you hit home runs — but it’s a long game. That happened in the bottom of the first. It’s a nine-inning game, and they didn’t quit,” Duvall said.

Indeed, any victory party was premature — even after Freddie Freeman’s long homer put Atlanta ahead 5-4.

Instead, the Astros hushed those fans and the Braves, pulling off a big comeback to stay afloat.

Now, the Astros need an even bigger one to win it all.

Game 6 is Tuesday night in Houston.

No team has clinched a World Series at home since the 2013 Red Sox. For Altuve and the Astros to do it, they must win twice at Minute Maid Park — the last club to overcome a 3-1 Series deficit was the Cubs against Cleveland in 2016.

Only once has a team facing elimination in the World Series produced a bigger rally. That was a five-run surge by the Angels in Game 6 of 2002 — against a Giants team managed by Baker.

Down 4-0 after Duvall tagged Framber Valdez, the Astros began to chip away against surprise starter Tucker Davidson.

The rookie wasn’t even on the postseason roster a week ago. Relaxing at a hotel in the Atlanta suburbs, chowing down a takeout salad from The Cheesecake Factory, he saw Game 1 starter Charlie Morton get hurt and joined the Braves the next day in Houston.

It made for a cute story, but Houston wasn't buying.

Bregman got things going with an RBI double that ended the Astros’ rut with runners in scoring position and Maldonado — 4 for 41 in the postseason at that point — followed with a sacrifice fly that pulled them to 4-2.

An error by shortstop Dansby Swanson helped Houston tie it in the third. Altuve reached on the misplay and Michael Brantley walked, ending Davidson’s day. Correa greeted reliever Jesse Chavez with an RBI double, and a run-scoring grounder by Yuli Gurriel made it 4-all.

Freeman untied it moments later, connecting for a 460-foot home run that matched the longest of his career.

But having finally gotten loose at the plate, the Astros weren’t going quietly on this night.

Singles by Correa and Gurriel and a two-out intentional walk to Bregman loaded the bases in the fifth. Lefty reliever A.J. Minter lost Maldonado for a walk that tied it, and Gonzalez singled for the lead.

Maldonado added an RBI single in the seventh and Correa extended the lead the next inning.

José Urquidy worked a scoreless inning in relief for his second win of the Series, becoming the first pitcher to earn one as a starter and reliever in the same Fall Classic since Randy Johnson for Arizona in 2001.

Phil Maton tossed two shutout innings and Kendall Graveman did the same to close it out.

Houston became the first team to win Game 5 on the road when trailing 3-1 in the World Series since the 1992 Braves in Toronto.

Astros right-hander Zack Greinke got the first pinch-hit by an American League pitcher in World Series history, lining a single in the fourth. He also got a hit when he started Game 4.

The previous hit by a pinch-hitting pitcher in the Series came way back in 1923 by Jack Bentley of the New York Giants. Bentley had two of them against the Yankees in that matchup after batting .427 during the regular season.

Braves: LHP Max Fried is fully rested and ready for Game 6. He was hit hard in Game 2, his second consecutive shaky start after an excellent season.