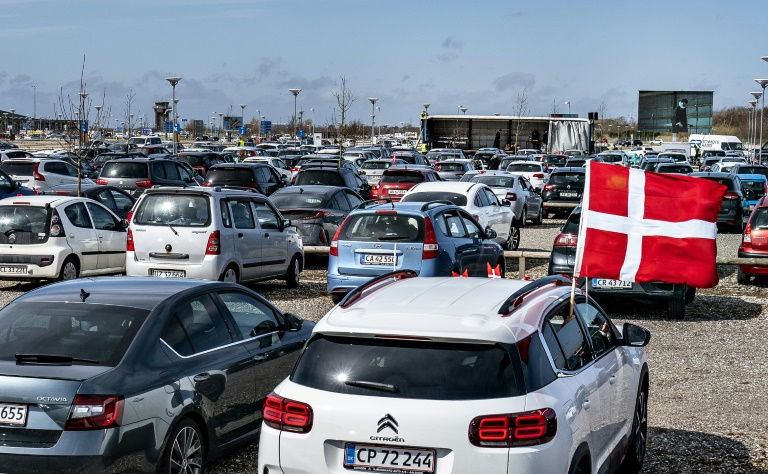 A drive-in Easter service was held in the car park of Aalborg airport earlier this month (Photo: AFP)

Football fans in Denmark are banned from attending matches due to restrictions over the new coronavirus, but top division club Midtjylland has come up with a solution inspired by classic drive-in theatres.

Sporting and cultural events are one of the pleasures that Danes, like many Europeans, have had to give up as restrictions aimed at curbing the spread of COVID-19 have been introduced.

The Danish league is currently suspended until further notice but Midtjylland has already invited fans to enjoy matches, once they resume, from the parking lot outside the stadium.

Sitting in parked cars, fans will be able to follow the action inside on giant screens, while adhering to social distancing restrictions.

"At first, we'll have a capacity of 2,000 cars with up to five fans in each," Mads Hviid Jakobsen, spokesman for the 2018 Danish league champions, told AFP.

The announcement has already been praised by fans.

"I'm proud of my club," said one Facebook user, while another was delighted that he "won't have to freeze next time" he attends a match.

Hviid Jakobsen expected matches, which would begin being played in empty stadiums, to resume in "the period of May 21 to May 31".

That means the new arrangement could satisfy up to 60,000 people, which is nearly all of the inhabitants of the city of Herning where the club is based.

Nearly 87,000 people live in the municipality and the MCH Arena, the club's home ground, has a capacity for 11,800 spectators.