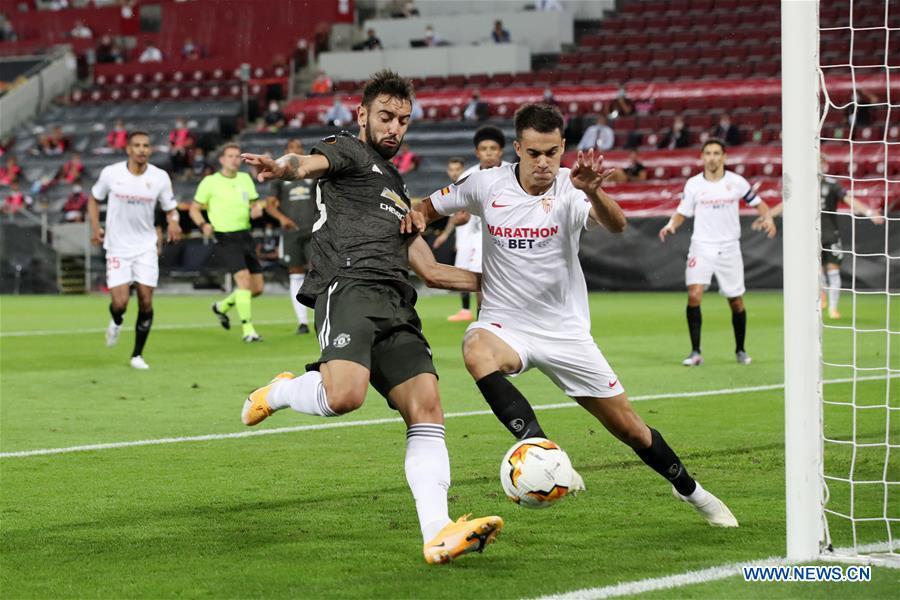 Sevilla came from behind to beat Manchester United 2-1 with goals from Suso and Luuk de Jong in their UEFA Europa League semifinal on Sunday.

A see-saw encounter saw chances at both ends of the pitch throughout the 90 minutes. Man United got a better start to the second half but spurned a number of chances, whereas Sevilla clinically made use of their opportunities to book their place in the final.

The Red Devils had a dream start as Marcus Rashford was felled by Diego Carlos inside the box, allowing Bruno Fernandes to slot home the subsequent penalty with just seven minutes played.

Sevilla responded well and piled on the pressure while United kept all their men behind the ball.

The Spaniards took the reins as the clock ticked down and restored parity on 26 minutes when Sergio Reguilon's square pass from the left wing to the far post found Suso, who made no mistake to slot home from tight angle.

United responded but were unable to retake the lead before the break, as Anthony Martial shot over the bar while Sevilla goalkeeper Yassine Bounou was on guard twice to deny Rashford and Bruno Fernandes.

After the restart, United came out with all guns blazing and pressed Sevilla on the back foot, but once again Bruno Fernandes and Martial failed to beat Bounou from promising positions.

As the match progressed both sides traded attacks with chances at both ends. However, with 12 minutes until the final whistle, Sevilla shocked United with a goal from Luuk de Jong, who tapped home a pinpoint cross from a central position to turn the tide.

The Red Devils threw every man up front and pressed for an equalizer but Sevilla's defense stood firm and protected the narrow lead to the final whistle.

"Our goalkeeper staged a great performance. In the end, we deserve to reach the final. We waited for De Jong's arrival and we took advantage. Bounou in the second half was very important for us as well," Sevilla's head coach Julen Lopetegui said.

Sevilla will either face Inter Milan or Shakhtar Donetsk in the UEFA Europa League final on August 20.