SPORTS Delayed CSL kicks off with strict restrictions in place

Delayed CSL kicks off with strict restrictions in place

The long-awaited start of the new Chinese Super League season kicked off on Saturday after a five-month delay due to the coronavirus pandemic.

In Dalian on Sunday, Marouane Fellaini, the only known coronavirus case in the CSL who spent three weeks in a hospital, scored a hat-trick of headers in less than 10 minutes to give Shandong Luneng a 3-2 win over Rafa Benitez's Dalian Pro. 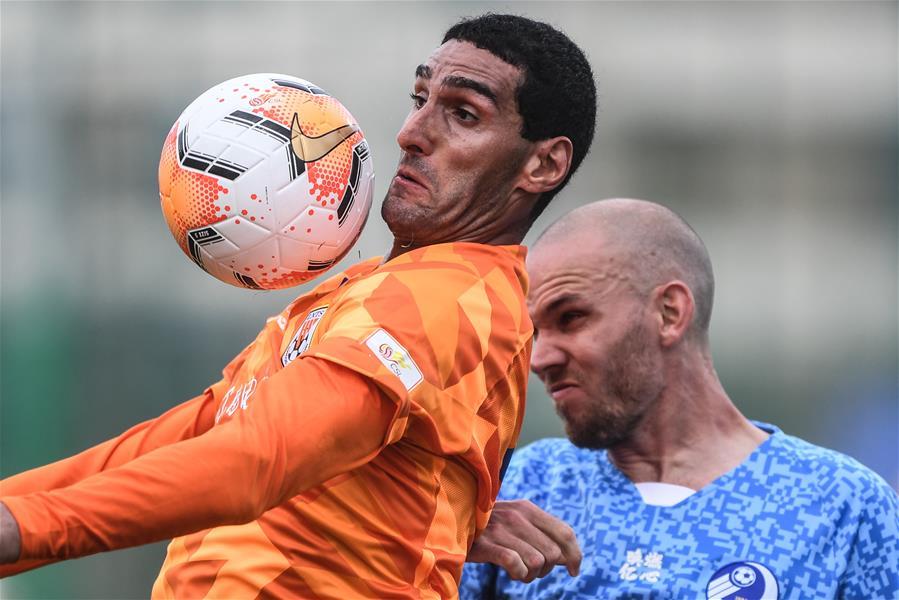 There was a minute's silence on Saturday to mourn the lives lost due to the coronavirus outbreak before the matches were played behind closed doors.

Qingdao has named Pablo Machin as the new head coach, but the 45-year-old former Espanyol coach couldn't make it to Suzhou for the game.

The CSL season, originally scheduled to start on February 22, has adopted a revamped format, under which the 16-team league was split into two groups.

Suzhou, in east China's Jiangsu Province, and Dalian, in the northeast Liaoning Province, were selected as the two host cities for a 14-round first phase of the league from July 25 to September 28.

All players and staff were tested for COVID-19 at airports on their arrival. The tests will be conducted every week.

Team hotels will be closed to the public, including the players' family and friends for more than two months, while the squad, referees and the hotel staff will be barred from leaving the restricted areas.

On Saturday, Wei Shihao broke the deadlock for the defending champion Evergrande in the seventh minute after a counter-attack against Greenland Shenhua. Wei doubled the lead in the 65th minute from close range after receiving a pass from Yang Liyu.

“I prefer him scoring one goal or two goals in each game, instead of a hat-trick in one match, followed by several goalless games,” Cannavaro said after the match.

Yu Hanchao played in his first game for Shanghai Shenhua on Saturday. He was sacked by Evergrande after being caught altering his car license plate.

In Suzhou division's first game, Wuhan Zall edged Qingdao Huanghai 2-0. Liu Yun of Wuhan broke the ice in the 30th minute. Eight minutes after the break, Liu added another to give Wuhan a winning start.

Former Newcastle United striker Salomon Rondon looked to have given Benitez's side a win on Sunday with a stooping 57th-minute header. But the former Manchester United midfielder Fellaini roared to the fore with three towering headers in the 79th, 83rd and 86th minutes in Dalian.