SPORTS Delivering the need for speed

Delivering the need for speed 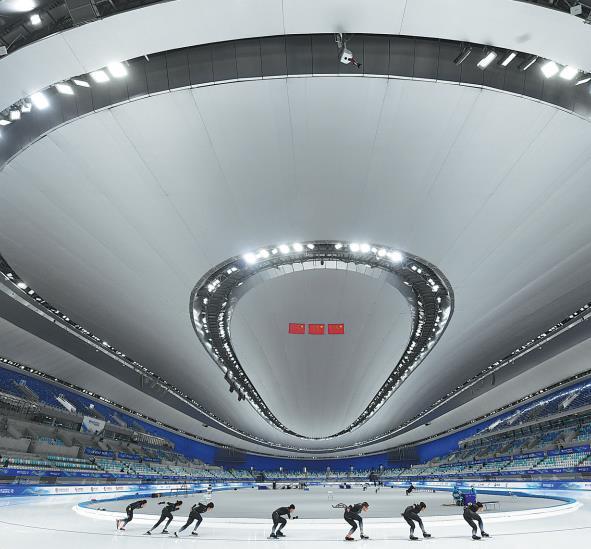 Located in downtown Beijing, where the altitude is close to sea level, the venue passed its first official test program with flying colors last week, when a series of personal bests by Chinese skaters showed the ice is approaching the level usually found on high-altitude tracks.

The results have given Canadian ice-making expert Mark Messer and his team confidence that more records can fall at next year's Olympics.

"I don't see any reason why this can't be one of the fastest ovals in the world ... but we just need to find the right parameters to make that happen," said Messer, who was hired by Beijing 2022 to prepare the ice for the long-track discipline at his sixth Winter Games.

Messer and his Chinese colleagues, however, are refusing to rule Beijing's newly built Olympic oval out of the world-record equation.

"There are so many different factors you have to control to get the best. We've gone to other lowland ovals that were very fast," Messer said, whose team prepared the low-lying rink for the 2018 Winter Games in South Korea, where five Olympic records were renewed.

"We are very close to breaking world records at sea level, which is not very common. So I see no reason why we shouldn't be able to set those standards here."

"The gap between high and low rinks has been narrowing over the past decade. It's not impossible for us to make the ice fast enough for new records to be set, especially with the venue facilitated by the new refrigeration system," said Wang, the bronze medalist in women's 500m at the 2010 Vancouver Games.

Dubbed the "Ice Ribbon" due to its slick exterior lighting beams, the Beijing oval is the first Olympic speed skating venue to make ice with an environmentally friendly cooling system that uses carbon dioxide as a refrigerant, instead of the harmful substance Freon.

The new system, which freezes quicker and is more stable than the old technique, helps maintain consistent temperature, density and firmness of ice across the 400-meter track, allowing skaters to push to their limits.

Among the athletes racing at the oval's debut session on Wednesday, Chen Chuang, who finished second in a 500m youth race, left the track mightily impressed.

"For me, this ice feels already perfect," he said. "The thickness is just right, the flatness is superb and the smoothness makes it easy to push for speed. I don't really see anything that can be improved upon."

Despite the positive feedback, Messer and his Chinese assistants are certainly not about to rest on their laurels.

"This is a very valuable competition for us," said Messer. "We can see the effect of the changes that we make to the ice with temperature and different factors that we can control now that we couldn't before.

"But there are still a lot of improvements to make. We need to understand the way the systems work together and get everything coordinated into one package."

Feng Gang, one of four Chinese ice technicians on Messer's crew, added that changes to the indoor temperature and humidity when spectators are allowed entry will present additional challenges.

According to a provisional plan agreed by Beijing 2022, the International Olympic Committee and winter sports international federations, larger scale test events involving foreign athletes and team officials will be staged at a number of Beijing venues, including the oval, from September to December this year.

Beyond 2022, it will diversify to host the likes of figure skating, curling and hockey.

Messer expects his Chinese colleagues to carry on with operations up to international standards after he sees out his 2022 contract.

"We want to leave a legacy here," he said. "In some of the past Olympics, we haven't had a legacy. We've come into the building, we've done the Games, then left.

"This time there is a great legacy plan for this building. So we want to make sure that when we leave, there are trained personnel here that can carry on."