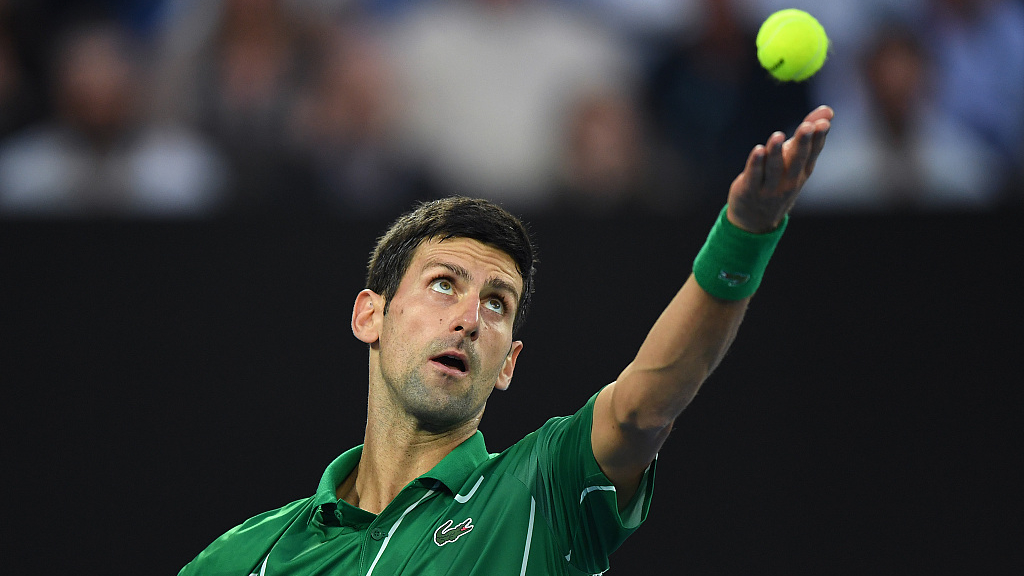 Novak Djokovic of Serbia in action during the men's singles final of the Australian Open in Melbourne, Australia, February 2, 2020. (Photo: VCG)

Novak Djokovic faces a dilemma if it becomes compulsory for players to get vaccinated before they can begin competing once the tennis season resumes following the hiatus created by the coronavirus pandemic, the world number one said on Sunday.

"Personally I am opposed to vaccination and I wouldn't want to be forced by someone to take a vaccine in order to be able to travel," Djokovic said in a live Facebook chat with several fellow Serbian athletes.

"But if it becomes compulsory, what will happen? I will have to make a decision. I have my own thoughts about the matter and whether those thoughts will change at some point, I don't know.

"Hypothetically, if the season was to resume in July, August or September, though unlikely, I understand that a vaccine will become a requirement straight after we are out of strict quarantine and there is no vaccine yet."

Last month, former world number one Amelie Mauresmo said the rest of the 2020 tennis season might be wiped out, saying that action should not resume before players can get vaccinated against the novel coronavirus.

"International circuit = players of all nationalities plus management, spectators and people from the 4 corners of the world who bring these events to life. No vaccine = no tennis," the two-time grand slam winner said in a widely shared tweet.

Medical experts have said that vaccines against the respiratory virus would not be ready until next year, raising doubts whether any further tennis tournaments can be contested this year.

This year's Wimbledon championships have been canceled for the first time since World War II while the French Open, originally due to be held from May 24 to June 7, was rescheduled for September 20 to October 4, shortly after the end of the U.S. Open.

Djokovic made a flying start to the 2020 season, winning the Australian Open in January for his 17th grand slam title and stretched his winning run to 18 matches before the pandemic brought sports events across the world to a halt.

The 2020 Tokyo Olympics and the Euro 2020 soccer championship were among the events postponed until next year as the pandemic has caused 165,000 deaths worldwide.

So far the governing bodies of tennis have suspended all tournaments until July 13. In addition, the women's Rogers Cup in Montreal, which had been due to be held in August, will also not take place this year.