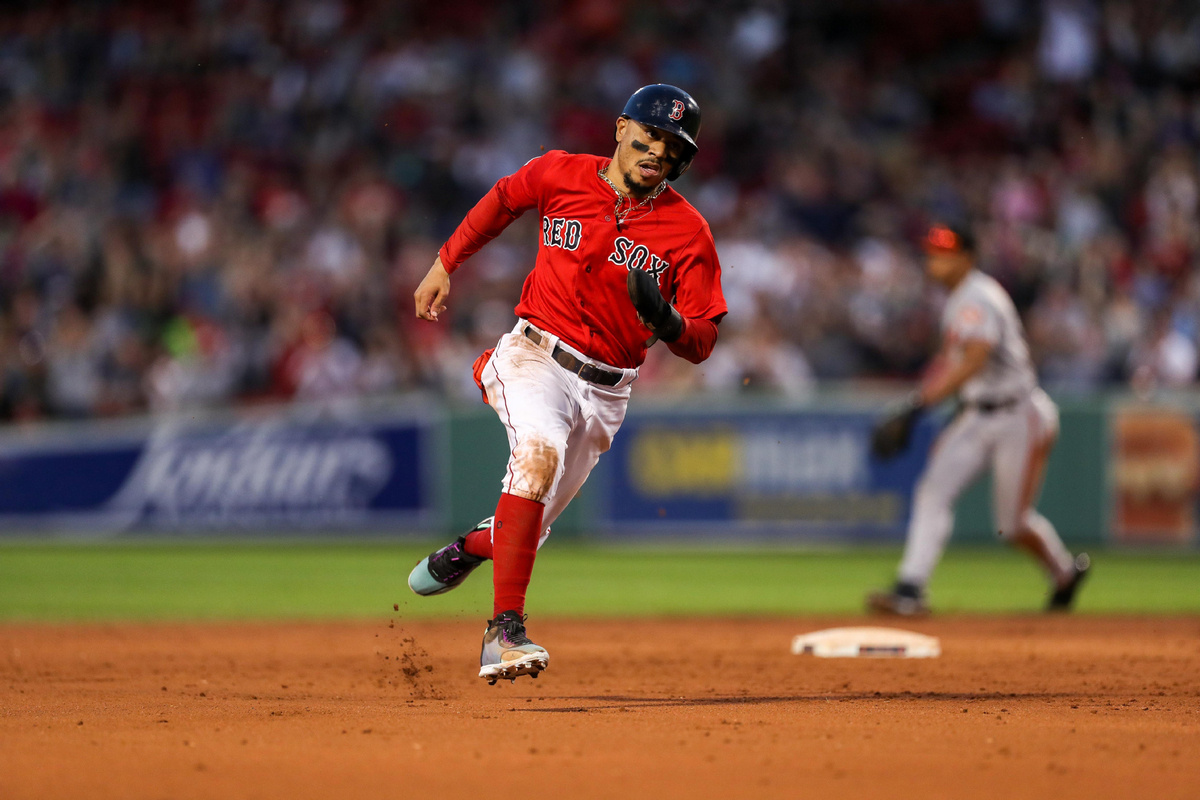 Boston Red Sox right fielder Mookie Betts (50) rounds second base to score the game winning run on a hit by third baseman Rafael Devers (not pictured) against the Baltimore Orioles during the ninth inning at Fenway Park in Boston, USA, Sept 29, 2019. (Photo: Agencies)

BOSTON－Banking on Mookie Betts to be the missing piece in their World Series pursuit, the Los Angeles Dodgers finally pulled off a blockbuster deal with the cost-cutting Red Sox.

Boston agreed to trade the 2018 American League MVP to the Dodgers on Tuesday night, according to two people with knowledge of the deal, packaging Betts with lefthander David Price in a salary dump designed to save the Red Sox tens of millions of dollars and help them dip below baseball's luxury-tax threshold.

The Dodgers, eager for a World Series title after losing in the 2017 and '18 Fall Classics, are sending outfielder Alex Verdugo back to the Red Sox. The deal also involves the Minnesota Twins, who are getting right-hander Kenta Maeda from the Dodgers and sending pitching prospect Brusdar Graterol to Boston. Los Angeles will also get cash from Boston to offset some of the $123 million owed to Betts and Price, but the exact amount was not yet known.

The people spoke to Associated Press on condition of anonymity because the trade, pending the exchange of medical information, had not been announced.

Betts, who will earn $27 million this season, has spurned nine-figure offers from the Red Sox for a long-term deal and expressed eagerness to test the free-agent market. Boston decided to move him now－a century after selling Babe Ruth to the New York Yankees－rather than let the four-time All-Star walk after the 2020 season.

One of baseball's best all-around talents, the popular Betts should fit nicely into a Dodgers lineup that also includes reigning National League MVP Cody Bellinger. Los Angeles has won seven straight NL West titles but hasn't celebrated a World Series championship since 1988. They fell in 2018 against Betts and the Red Sox, a year after being defeated by the Houston Astros in seven games.

The Dodgers finally pulled off the kind of splashy offseason deal that has eluded them in recent years. They lost out on two primary offseason pursuits when pitcher Gerrit Cole signed with the Yankees for $324 million over nine years and third baseman Anthony Rendon signed a $245 million, seven-year contract with the rival Angels.

Until now, the Dodgers' top addition this winter was reliever Blake Treinen.

Verdugo, a left-handed hitter, batted.294 with 44 RBIs and 12 home runs in 106 games before a back injury in August ended his season early. His outfield defense is average, but at 23 he has time to improve.

Betts' departure deepens the disappointment in Boston, where the New England Patriots sat out the Super Bowl for the first time in four years and face the prospect of quarterback Tom Brady leaving as a free agent. The Red Sox are now without the best player, the top executive and the manager who led them to a franchise-record 108 wins and the World Series championship a year ago.

The deal makes sense only in the complicated economics of baseball's collective bargaining tax, which penalizes a team for spending over a preset limit－$208 million for 2020. What's more, a club that surpasses the threshold in three straight years pays a top rate of 95 percent; on the other hand, if a team goes under the limit for a season, the penalty for their next violation resets to the lowest rate, 20 percent.

This deal is expected to get Boston below that threshold.

Owner John Henry said in September, after the team missed the playoffs for the first time since 2015, that the Red Sox "need to be under the CBT". Team president Sam Kennedy later walked back the comments and said that was "a goal but not a mandate". After he was hired, chief baseball officer Chaim Bloom said: "The goal remains to be competitive always. 2020 is important. So are 2021, 2022 and beyond."

Undoubtedly, the focus is now on the future.

The Red Sox remain without a manager three weeks after firing Alex Cora for his role in the Houston Astros 2017 sign-stealing scandal; Major League Baseball has not announced the results of its investigation into whether Cora implemented a similar scheme when he took over in Boston in '18. Pitchers and catchers are due to report to spring training in one week.

The new manager will need to sort out a lineup that is missing a player who batted leadoff and won four straight Gold Gloves in the outfield, as well as Price, a five-time All-Star.

Red Sox slugger JD Martinez was among the first to react to reports of the deal on social media, sending out only a sad-face emoji.

Graterol is a hard-throwing righty who ranked 83rd on MLB.com's most recent list of the top 100 prospects in baseball. He made his major-league debut last season with the Twins and posted a 4.66 ERA in 10 relief appearances. A starter in the minors, he faces questions about his durability but could get a chance to pitch in Boston's rotation. If not, he's thrown as hard as 102 mph and could be an effective late-inning reliever.