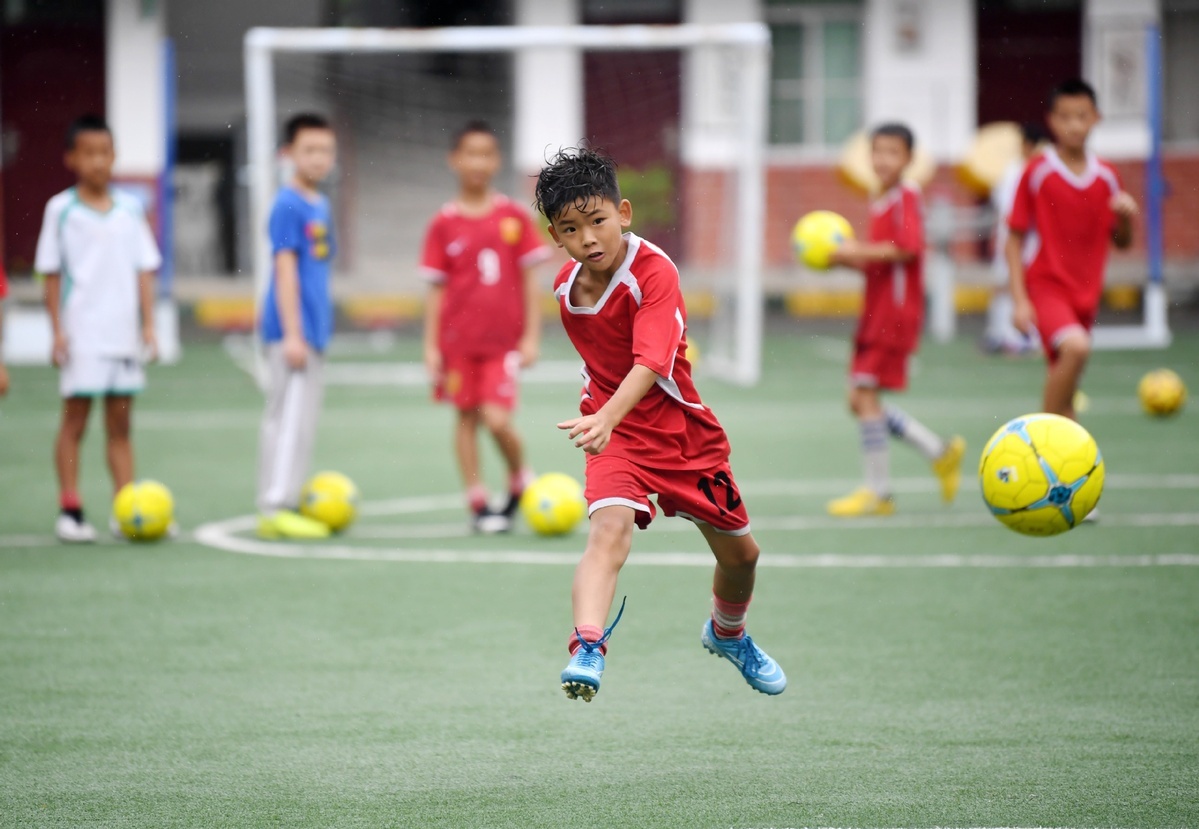 In the central primary school of Wuguanyi, a small town of Liuba county in Shaanxi province, 48 boys and girls play soccer together for almost a month during the summer vacation. (Photo: Xinhua)

In the central primary school of Wuguanyi, a small town of Liuba county in Shaanxi province, 48 boys and girls play soccer together for almost a month during the summer vacation.

The youngsters have two training sessions and an evening training match every day. Their aim is to eventually enroll at universities on soccer scholarships, and some are even hoping to be selected at national team level, just like Liuba alumni Shi Xiaomin and Zou Mengyao.

In the third-place playoff match of the 2019 Asian Football Confederation Under-16 Women's Championship, Shi and Zou both hit the net as China beat Australia 2-1, sending the players' Shaanxi hometown into a frenzy.

"Shi once told me that she would score a goal in the championship, in order to give her teachers and relatives in Liuba something in return. She delivered on her promise," said Zhang Suyang, deputy head teacher of Liuba Middle School and a former coach of the pair.

In the 1990s, Zhang tried out for Shaanxi's youth team but ultimately did not pursue a professional career in the sport. After graduating from college, Zhang chose to become a teacher at Jiangwozi Middle School in Liuba.

When the town of Liuba was asked to boost its women's soccer squad by Shaanxi's sports bureau in 2008, Zhang decided to establish a women's team at Liuba Middle School, where he was teaching.

He sought sponsors in the small county with a population of just 40,000, and cooperated with his elder brother Zhang Suchun's Huoshaodian Town Primary School.

Within this environment, Shi and Zou took their first steps on their journey to realize their dreams.

"Compared with China's coastal counties in the east and the south, Liuba is less developed," Chen Jun, the deputy director of Liuba's sports and education bureau, told Xinhua.

"But with the school football program, it is much easier for our teenagers to pass the college entrance exam and be accepted into a top-level university."

In order to unify the teenagers' daily schedules, Liuba Middle School has placed all of its best players into one class. Every "football class" has around 30 players, representing male and female teams.

Tang became a student in the "football class" six years ago, bringing Liuba many trophies and ultimately receiving an offer from Northwest University.

As Chen explains, Liuba's strategy of developing soccer players was dubbed the"1352 mode".

"One means we will continue our football classes across different grades in Liuba Middle School. Three stands for looking for some talented youngsters across our three primary schools.

"Five refers to the fact that the PE teachers spend 50 percent of extracurricular activities teaching the students to play soccer. Finally, we host soccer activities in two Liuba kindergartens, in order to grow the children's interest in soccer."

Yingpan village was one of the poorest parts of Liuba county 10 years ago.

A villager named Luo Caiqin told Xinhua that 50 of her fellow residents worked elsewhere, while her family only earned around 20,000 yuan ($2,800) a year by growing materials for use in traditional Chinese medicine.

In 2017, a soccer youth training base was constructed in Yingpan. Four professional-standard pitches can now be found deep in the Qinling Mountains, complete with an apartment block that can house almost 900 people.

This facility hosted the 2020 Shaanxi youth soccer tournament, when the streets of Yingpan where filled with thousands of players and spectators to bring a big boost to the local economy.

After considering suggestions from many of the young players in attendance, Luo adjusted the stock at her store－to very profitable results.

Chen said that the income from the soccer industry would promote the county's school teams.

The Yingpan base will have four more pitches in 2021, meaning it can meet the training requirements of many competitive teams.

"We'd like to make the Yingpan base a training center in west China for footballers, skiers and so on," Chen said. "Football will become Liuba's eye-catching business card in future."