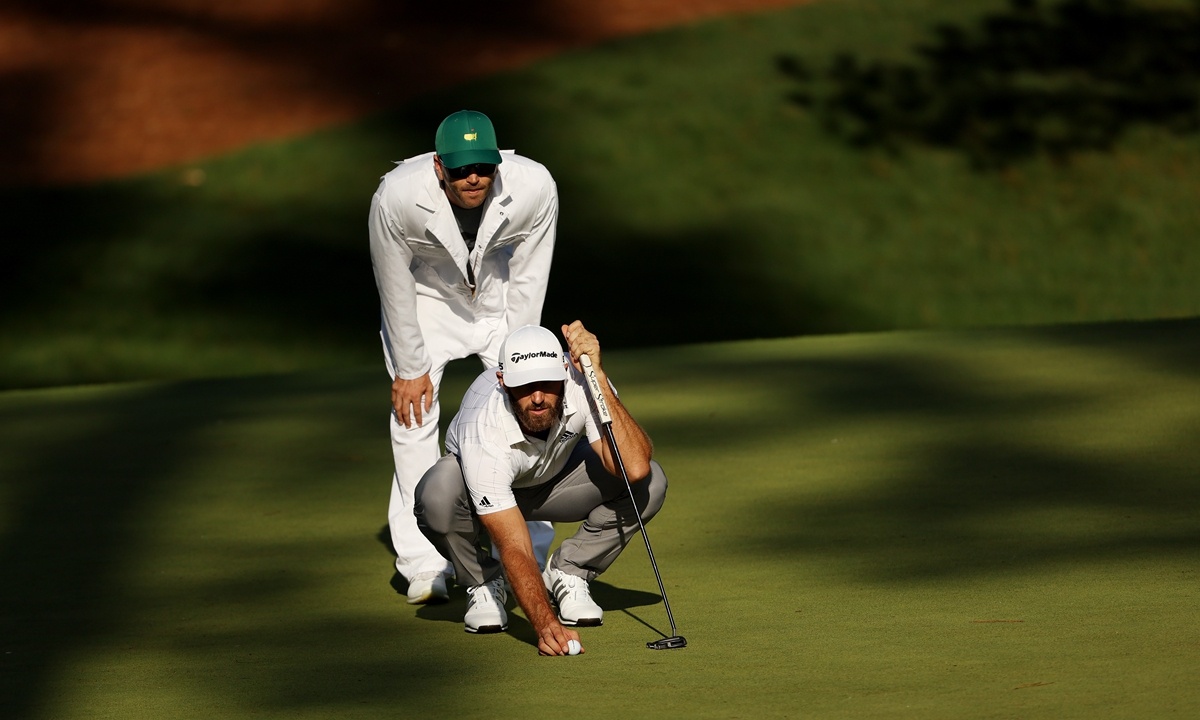 Dustin Johnson of the US lines up a putt on the 10th green during the third round of the Masters on Saturday in Augusta, Georgia. Photo: VCG

Top-ranked Dustin Johnson seized command of the Masters on Saturday, matching the 54-hole record at Augusta National to grab a four-stroke lead in quest of a second major title.

Pulling away from an elite field at Augusta National, the 36-year-old American, who grew up only an hour's drive from the course, fired a seven-under-par 65 to stand on 16-under-par 200 after three rounds.

"I've got a lot of confidence in everything I'm doing," Johnson said. "Tomorrow I'm going to have to go out and do the same kind of thing.

"I've got a lot of of great players around me. I'm going to have to play a really good round if I want to put on that green jacket."

Johnson went a career major best four-under in the first four holes, making a tap-in eagle at the par-five second, curling in a six-footer for birdie at the third and sinking a long birdie putt at the fourth.

He added tap-in birdies at the par-four seventh, par-five 13th and par-five 15th to equal the 54-hole mark set in 2015 by Jordan Speith.

Johnson is the first player to shoot 65 or better twice in the same Masters after a first-round 65.

Im Sung-jae, a 22-year-old South Korean who could become the first debut Masters winner since 1979, closed with a birdie to shoot 68 and share second on 204 with Mexico's Abraham Ancer, another Augusta newcomer, and Australia's Cameron Smith.

Im could become only the second Asian man to win a major after South Korean Yang Yong-eun at the 2009 PGA Championship.

Defending champion Tiger Woods, who began four strokes off the pace, battled through back pain to shoot 72 and stand on 211, answering bogeys at the par-five eighth and par-four 11th with birdies at the par-three 12th and par-five 15th.

"Long days like this, I'm going to get a little bit sore," Woods said. "I can walk all day. The hard part is bending and twisting."

Woods, a 15-time major winner who turns 45 next month, seeks a sixth green jacket and an 83rd career PGA Tour victory to break the record he shares with Sam Snead.

Fifth-ranked Rory McIlroy, needing only a green jacket to complete a career Grand Slam, shot 67 to stand on 208, but sees little hope of swiping the green jacket.

US Open winner Bryson DeChambeau, who many feared would overwhelm Augusta National with his power-driving game, tested negative for COVID-19 Friday after feeling dizzy on the course. He shot 69 Saturday to stand on 213.