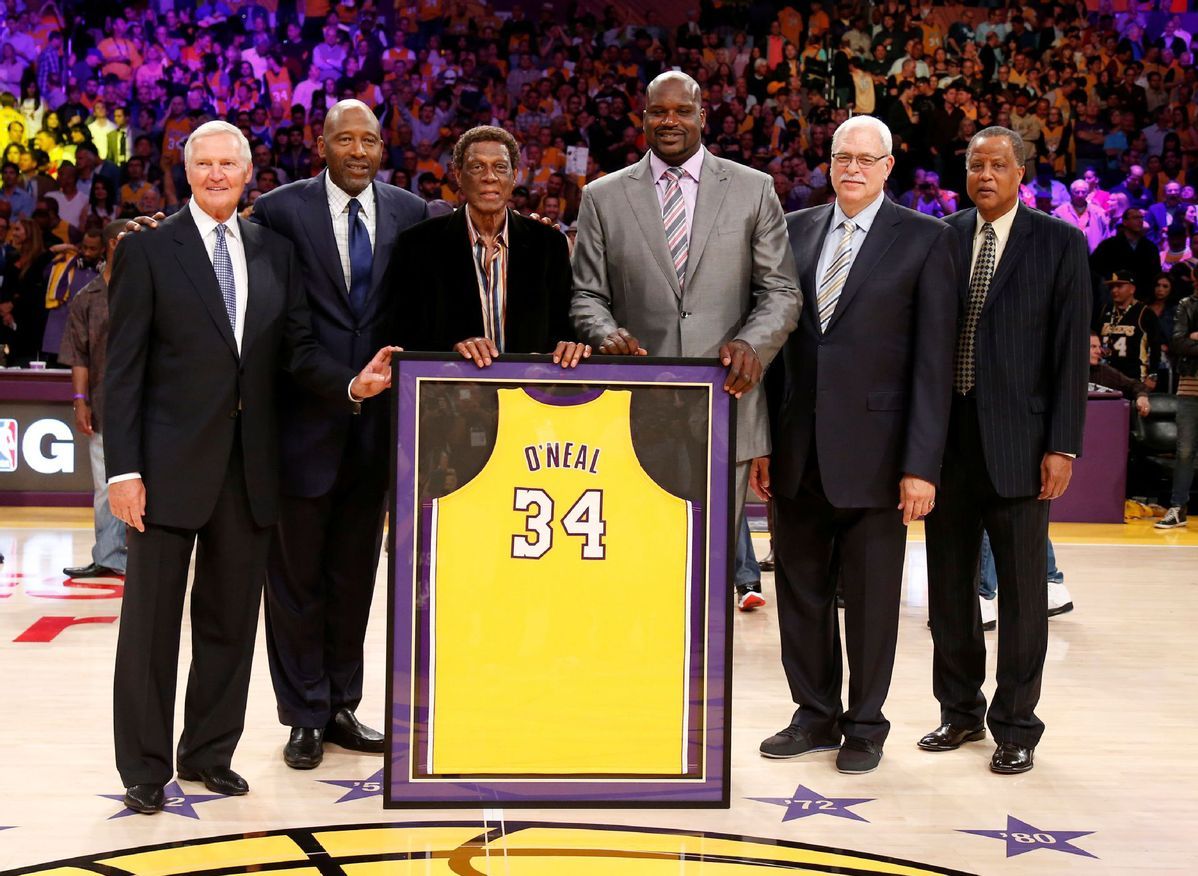 LOS ANGELES - Elgin Baylor changed the very direction of basketball when he joined the NBA and brought his vertical feats of athletic brilliance to a largely horizontal game.

He filled scoresheets and sparked young imaginations with his trailblazing aerial style, and every high-flying player of the past 60 years has followed his path.

Although the Lakers' first superstar in Los Angeles never won a championship ring, Baylor still looms high above the franchise and the game he loved.

The Hall of Fame forward died Monday of natural causes in Los Angeles with wife Elaine and daughter Krystal by his side, the team said. He was 86.

An 11-time All-Star who soared through the 1960s with a high-scoring artistry that became the model for the modern basketball player, Baylor played a major role in revolutionizing basketball from a ground-bound sport into an aerial show.

"Elgin was THE superstar of his era — his many accolades speak to that," Lakers owner Jeanie Buss said in a statement.

With a silky-smooth jumper and fluid athleticism, Baylor spent parts of 14 seasons with the Lakers in Minneapolis and Los Angeles, teaming with Jerry West in one of the most potent tandems in basketball history.

Baylor's second career as a personnel executive for 22 1/2 years with the woebegone Los Angeles Clippers was far less successful, but he remained a beloved figure in Los Angeles and beyond. Baylor strengthened his ties again to the Lakers over the past decade, and the team honored him with a statue outside Staples Center in 2018.

"Elgin Baylor set the course for the modern NBA as one of the league's first superstar players," NBA Commissioner Adam Silver said. "In addition to his legendary playing career, Elgin was a man of principle. He was a leading activist during the height of the civil rights movement in the 1950s and 1960s and an influential voice among his fellow players."

The 6-foot-5 Baylor played in an era before significant television coverage of basketball, and confoundingly little of his play was ever captured on film. His athletic brilliance is best remembered by those who saw it in person. No one had a better view than West, who once called him "one of the most spectacular shooters the world has ever seen."

Baylor had an uncanny ability to hang in mid-air indefinitely, inventing shots and improvising deception along his flight path. Years before Julius Erving and Michael Jordan became international heroes with their similarly acrobatic games, Baylor created the blueprint for the modern superstar.

Baylor was the first NBA player to score 70 points in a game, and he still holds the single-game NBA Finals scoring record with 61 against Boston in 1962. He averaged 27.4 points and 13.5 rebounds over his career, and he even averaged a career-best 38 points during a season in which he only played on weekend passes while on active duty as an Army reservist.

"I spent a lot of time with him over the years," Charles Barkley said during CBS' coverage of the NCAA Tournament. "To me, he's probably the most underrated great basketball player of all time. He always carried himself with great dignity and respect."

Baylor played high above most of his contemporaries, but never won a championship or led the NBA in scoring largely because he played at the same time as centers Bill Russell, who won all the rings, and Wilt Chamberlain, who claimed all the scoring titles. Knee injuries hampered the second half of Baylor's career, although he remained a regular All-Star.

West and Baylor were the first in the long tradition of dynamic pairings with the Lakers, followed by Magic Johnson and Kareem Abdul-Jabbar in the 1980s before Kobe Bryant and Shaquille O'Neal won three more titles in the 2000s.

"My first few years in the league, he cared for me like a father would a son," West said Monday. "We shared the joy of winning and the heartbreaking losses in the finals. He was a prince both on and off the court."

Baylor's Lakers lost six times in the NBA Finals to the Boston Celtics and another time to the New York Knicks. Los Angeles won the 1971-72 title, but only after Baylor retired nine games into the season, dissatisfied with his standard of play due to his ailing knees.

"Before there was Michael Jordan doing amazing things in the air, there was Elgin Baylor!" Johnson tweeted. "A true class act and great man." Elgin Gay Baylor was born in Washington, DC, on Sept 16, 1934. Named after his father's favorite watch, an "Elgin" timepiece, Baylor became infatuated with his sport even before he could afford a basketball, instead learning to shoot with a tennis ball.

After struggling academically in high school, Baylor played at Seattle University from 1956-58, averaging 31.3 points a game and leading the team to the 1958 NCAA championship game, where it lost to coach Adolph Rupp's Kentucky Wildcats.

Baylor was the No 1 NBA draft pick in 1958 by the Minneapolis Lakers, who were near bankruptcy after a steep fall from their first championship era. Baylor immediately saved the Lakers with his scoring and style.

He won the Rookie of the Year award and led the Lakers to the NBA Finals, where they lost to the fledgling Celtics dynasty in the first of the rivals' 12 championship series meetings.

When the Lakers moved to Los Angeles in 1960, Baylor became the centerpiece of their Hollywood revival. West also arrived from West Virginia in 1960, and they immediately clicked, averaging 69.1 combined points per game and becoming lifelong friends.

Baylor played in only 48 games during the 1961-62 season because of his military service, yet the Lakers still won the Western Conference by 11 games. Baylor's 61 points in Game 5 of the finals put the Lakers ahead 3-2, but they lost to the Celtics in overtime in Game 7 — the pinnacle of the Lakers' suffering at Boston's hands.

Frank Selvy missed a 10-foot jumper that would have won the game in regulation. In film of that moment, Baylor appears poised to get Selvy's rebound, then disappears from the screen. Baylor contended he was pushed out of bounds by Boston's Sam Jones.

"I've always felt that was our championship," Baylor told the Riverside Press-Enterprise in 2000.

He never got closer to a ring.

Baylor's knee problems began in the 1963-64 season, but he remained a star during his slow decline. He played his last full season in 1968-69 and suited up only sporadically until retiring at 37 in the fall of 1971. He was inducted into the Basketball Hall of Fame in 1977.

The expansion New Orleans Jazz hired Baylor as an assistant coach for their debut season in 1974, and he eventually served as their head coach for parts of three seasons.

The Clippers hired Baylor as their vice president for basketball operations in 1986, but the franchise was the model of sports ineptitude for most of his stay — poor drafting, indifferent fans and skinflint financial dealings. Most knowledgeable basketball people realized owner Donald Sterling was to blame for the franchise's woes, while Baylor received both admiration for his tenacity and ridicule for the Clippers' struggles.

A few months after losing that job in late 2008, Baylor filed a $2 million lawsuit against the Clippers, Sterling and the NBA, alleging he was fired because of his age and race. A Los Angeles County jury unanimously ruled in the Clippers' favor in March 2011, refusing to award any damages. Sterling lost the Clippers three years later.

The Lakers embraced Baylor in recent years, and his statue unveiling brought together several franchise greats. The statue features Baylor in his gold No 22 Lakers uniform, a ball in his left hand as he rises toward the hoop for another moment of improvisational brilliance.

Besides his wife and daughter, Baylor is survived by a son and daughter, Alan and Alison, from a previous marriage, and sister Gladys Baylor Barrett.

"Like everyone else," Elaine Baylor said, "I was in awe of his immense courage, dignity and the time he gave to all fans."