England clinched first place in Euro 2020 Group D with a 1-0 win against the Czech Republic, while Luka Modric's rocket propelled Croatia into the last 16 as their 3-1 victory over Scotland eliminated their Covid-hit opponents on Tuesday. 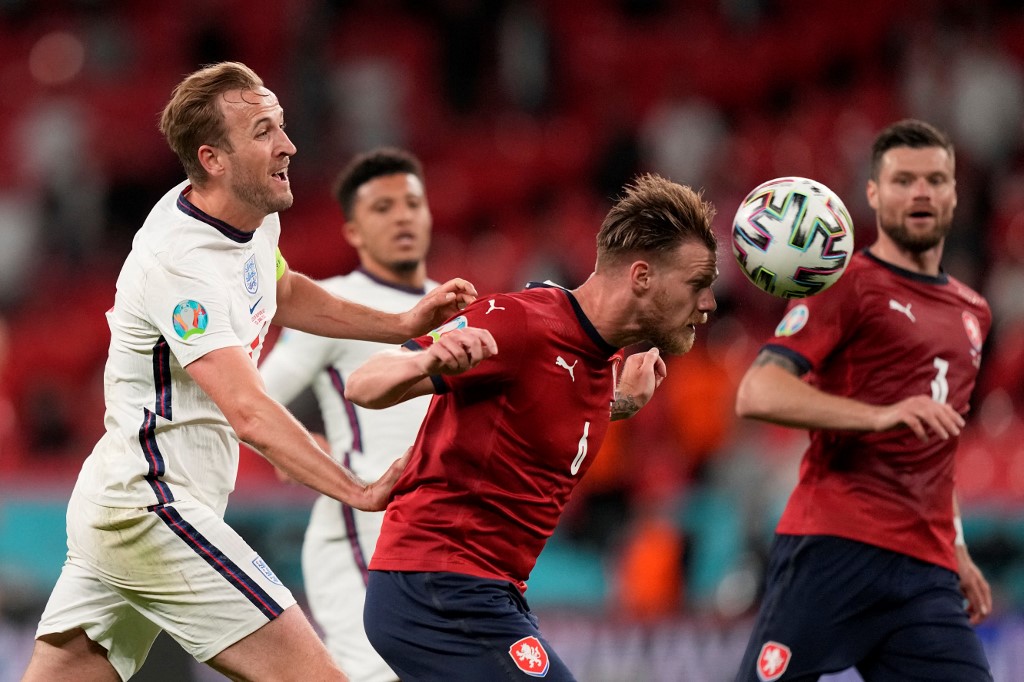 Already assured of playing in the last 16, England made certain that the knockout tie will be played in front of their own fans at Wembley thanks to Raheem Sterling's first-half winner against the Czechs.

England will face the second-placed team in Group F on June 29, with France, Germany, Portugal or Hungary all potential opponents.

Elsewhere, UEFA refused a request by Munich city authorities to light the Allianz Arena in rainbow colours for Germany's match against Hungary on Wednesday.

The Bavarian city had wanted to protest against Viktor Orban's right-wing government which has passed a law banning the "promotion" of homosexuality to minors.

But UEFA said it was "a politically and religiously neutral organisation" and blocked the proposal.

Munich said it would light up other landmarks instead.

At Wembley, the Czechs also knew they were sure to advance before kick-off, but their first defeat of the tournament left them in third place.

Their next opponent will be decided when the final two groups conclude on Wednesday.

Croatia leapfrogged the Czechs into second place with a commanding second-half display in Glasgow featuring one of the goals of the tournament from Real Madrid midfielder Modric.

The 2018 World Cup runners-up will play the second placed team in Group E -- which features Spain, Slovakia, Sweden or Poland -- in Copenhagen on Monday.

Scotland's first major tournament since the 1998 World Cup ended in heartache as they failed to meet their target of reaching the knockout stages of an international competition for the first time.

Having started Group D by narrowly beating Croatia 1-0 before being booed off after a drab 0-0 draw against Scotland, England produced a slightly more cohesive display against the Czechs.

There remains much for Southgate's men to work on, but England coped efficiently after a disrupted build-up that saw Mason Mount and Ben Chilwell forced into self-isolation after Scotland's coronavirus woes.

"We changed what we were doing overnight because of the change in personnel, so it is a huge credit to the players," Southgate said.

"There is more to come from us yet. We are not fluent but we have moments where we look a good side."

Southgate selected Jack Grealish to replace Mount and the Aston Villa midfielder provided a spark as his perfectly-flighted cross to the far post was headed in by Sterling in the 12th minute.

Arsenal's 19-year-old winger Bukayo Saka, also given a surprise start by Southgate in place of Phil Foden, added pace and invention to the England attack.

Kane was brilliantly denied by Tomas Vaclik's first-half save as he finally had his first shot on target in the tournament.

The Tottenham striker played the full 90 minutes for the first time in the tournament, but once again was a shadow of the player who finished as the Premier League's top scorer this season.

They have yet to concede a goal in the tournament, with Harry Maguire returning from ankle ligament damage to partner John Stones in central defence and shutting out the Czechs.

But Modric showed the class that made him the man to break Lionel Messi and Cristiano Ronaldo's grip on the Ballon d'Or in 2018, a stunning strike with the outside of his foot just after the hour mark restoring Croatia's lead.

Scotland finished with only one point and they will rue the fact that Chelsea midfielder Billy Gilmour was ruled out of the Croatia game after testing positive for the coronavirus.

Without Gilmour, who had been the man of the match on his first Scotland start in the draw against England, Steve Clarke's team lacked the quality to compete with Croatia.

"Croatia are a top team and they showed that. We've acquitted ourselves well in the tournament. It's a young group. We want to go again," Clarke said.