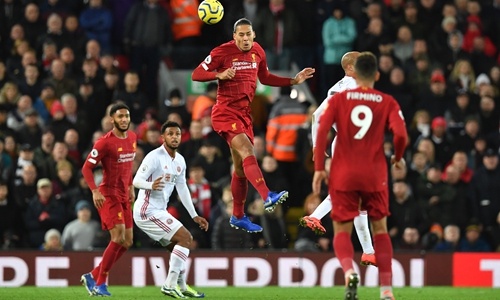 Foreign media's claims that China's state sports broadcaster has cancelled the English Premier League are groundless, as broadcasts of the games have merely been moved to the channel's high definition digital channel CCTV Sports Plus, and have not been scrapped, an industry insider told the Global Times, noting the reason for the change remains unclear.

A Bloomberg report on Thursday claimed that the state broadcaster, China Central Television (CCTV), is "taking English Premier League football matches off the air," attributing the change to souring international relations between China and the UK.

The report was published after CCTV Sports changed its original plan to broadcast the game between Chelsea and Liverpool on Wednesday (3:45 am Thursday in China) to Plus, but the claim that the airing of the game was completely scrapped is undoubtedly false.

The game was also rebroadcast on later Thursday morning, a CCTV Sports program list showed on Thursday. An originally scheduled game between Leicester City and Manchester United set to air on CCTV Sports on Sunday has also been moved to CCTV Sports Plus, cctv.com shows.

CCTV has only limited rights to broadcast Premier League games, so only four games are usually broadcast for every round on CCTV Sports along with its high definition digital channel.

An insider told the Global Times that blaming the channel change on souring relations between China and the UK is groundless.

"It's likely that relations between China and the UK are one of the reasons for the change, but CCTV Sports could have also made such a change for viewership reasons or broadcast reasons," said the insider, who prefers to to anonymous, on Thursday.

The Premier League, which is regarded as the world's most lucrative football league, is mainly broadcast as pay-per-view events on live streaming platform PPTV.

This is not the first time that the Premier League has not been broadcast on CCTV Sports. A previous hiatus lasted from 2003 to 2015 due to issues concerning broadcasting rights.

CCTV Sports canceled part of the live stream of Spain's La Liga games at the end of the 2014-15 season, a move which analysts at the time believed was due to the state broadcaster's failing to reach an agreement with La Liga over the broadcast rights for future seasons.