BEIJING, June 10 (Xinhua) -- After an interminable wait of 12 months, the delayed Euro 2020 tournament finally gets underway on Friday evening when Italy lock horns with Turkey. It's that time again, therefore, for Xinhua's finest to dust off their crystal balls and tell you how this year's competition will pan out. 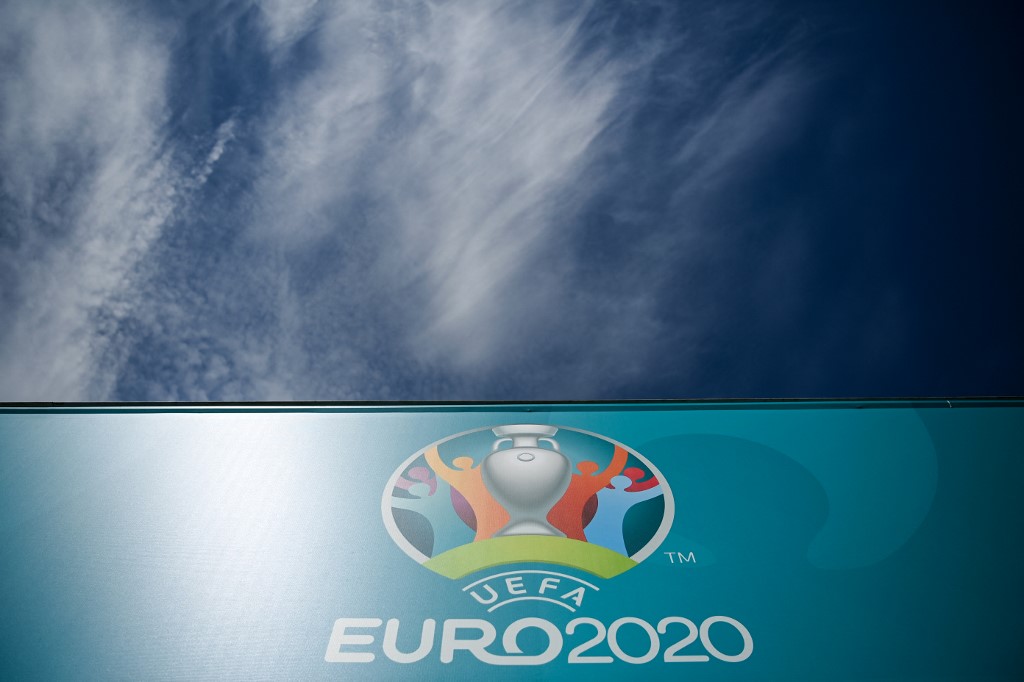 Michael Butterworth: Is this the year that England finally end their [*checks notes*] 55-year wait for a major international trophy? A young and hungry Three Lions squad contains an embarrassment of attacking riches, but any success will likely depend on how well a relatively inexperienced midfield takes to tournament football. 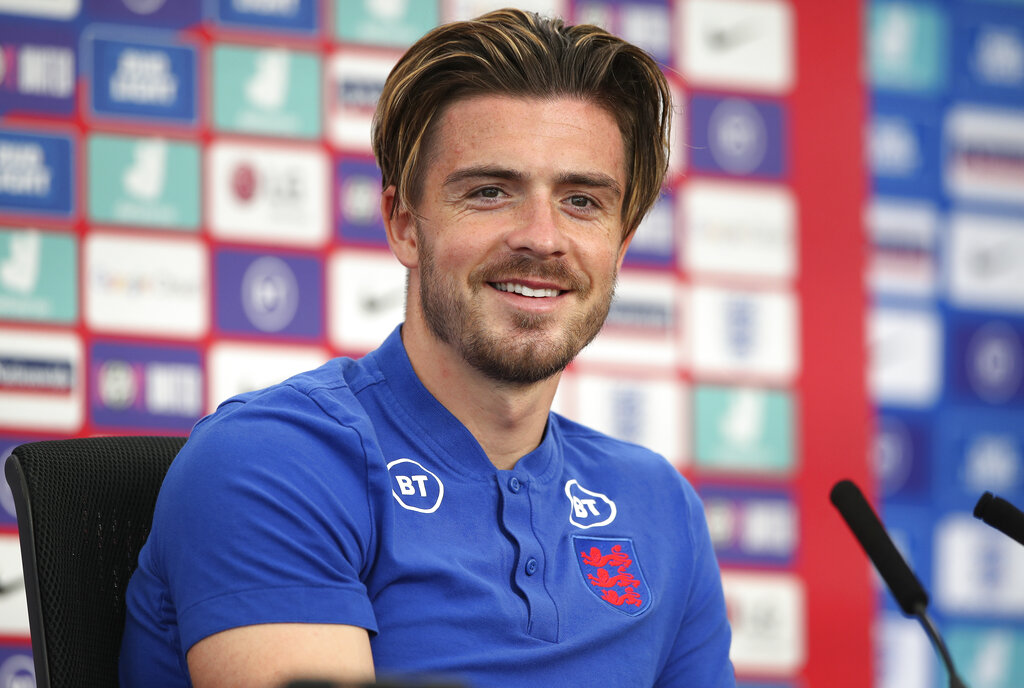 Tobie Taljaard: I almost went for Belgium here but I'm a little worried about their defense and I think France has the strongest, and deepest, overall squad at the tournament. They will repeat the World Cup-Euros double that they captured in 1998-2000.

Jonathan Dixon: France feel like the obvious choice, but I'm going for Italy. Roberto Mancini's team are methodical in possession, often dominating the ball during long periods of the game. A hard-nosed defense gives the Italians the security to deploy double playmakers in midfield. To go all the way, Italy will need Federico Chiesa and Domenico Berardi to raise their game to an elite level.

Michael Place: With essentially the same core group of players that lifted the World Cup in Russia three years ago, France have enviable quality all over the pitch. Their attacking trident of Kylian Mbappe, Antoine Griezmann and Karim Benzema will likely be the stuff of nightmares for opposition defenses. 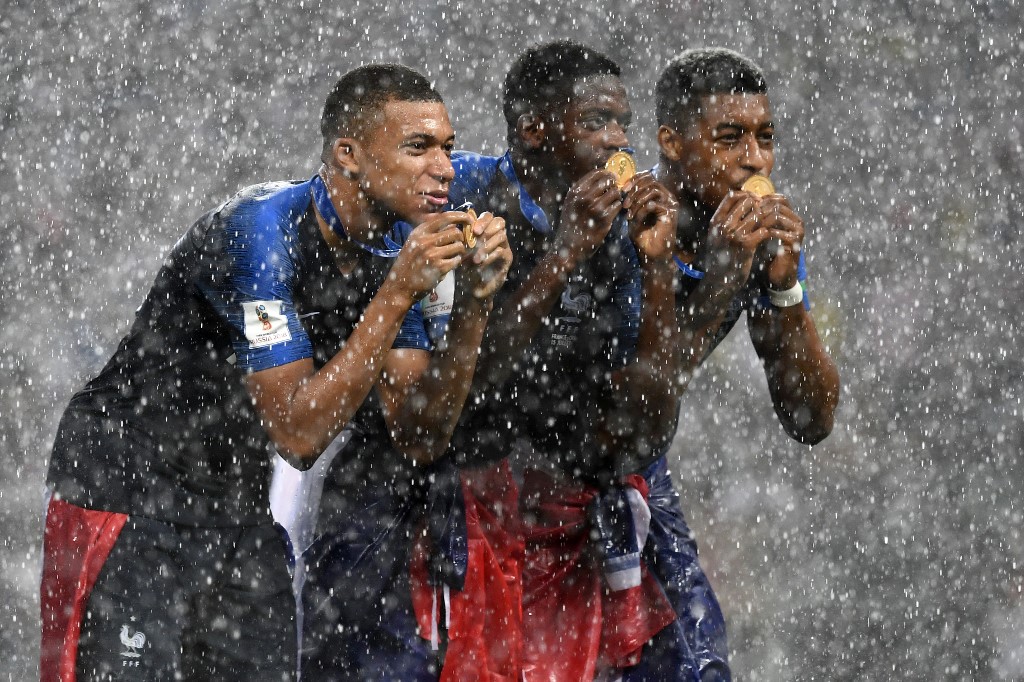 MB: I quite like the look of Sweden. They've got a good blend of youth and experience, and Emil Forsberg and Dejan Kulusevski should create plenty of chances for Alexander Isak, who has had an excellent campaign for Real Sociedad.

TT: The Netherlands seem to be flying under the radar slightly and will definitely be missing Virgil Van Dijk. But the squad has a good mix of youth and experience and I think they could make a surprise run.

JD: Turkey look a good bet to break into the semifinals. They have a strong spine throughout the team and have been treated to the renaissance of Burak Yilmaz, who fired Lille to the Ligue 1 title. Drawn in Group A, Turkey should feel confident about getting past Wales and Switzerland. If they reach the knockouts, there is the possibility of facing a beatable Netherlands in the last eight. 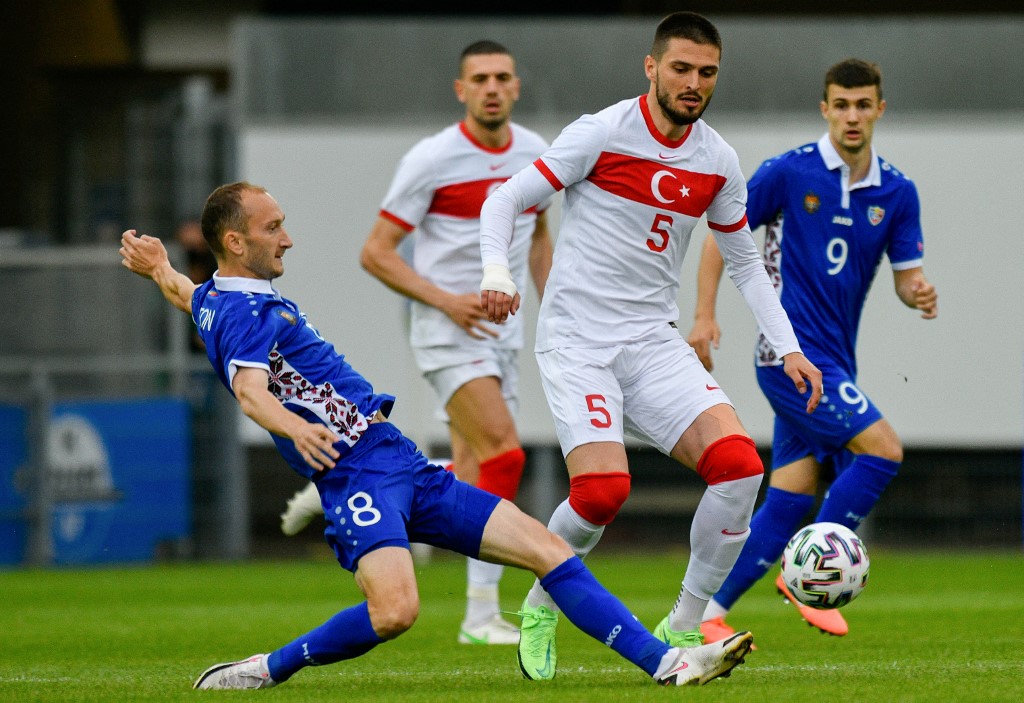 MP: The return of manager Senol Gunes has led to vastly improved results for Turkey. The squad is filled with emerging talents but also includes veteran striker Burak Yilmaz, whose goals helped fire Lille to the French championship.

3. And the biggest disappointment?

MB: They've got a relatively easy group, but I don't see Spain doing much this tournament. I'm not convinced Luis Enrique knows his best team, and they'll badly miss the leadership and experience of the injured Sergio Ramos. A potential COVID outbreak on the eve of the tournament threatens to derail them further.

TT: Reigning European and Nations League champions Portugal come into Euro 2020 with high expectations, but will crash out in the group stage after being drawn with France and Germany.

JD: Restricted attendances will be the most disappointing thing about Euro 2020. With Europe still recovering from the pandemic and travel restrictions in place across the continent, the usual multi-colored backdrop of traveling fans coming together will be absent from our screens. The biggest fear is that the atmosphere at some games could feel like glorified friendlies, rather than crucial bouts at European football's blue riband event. 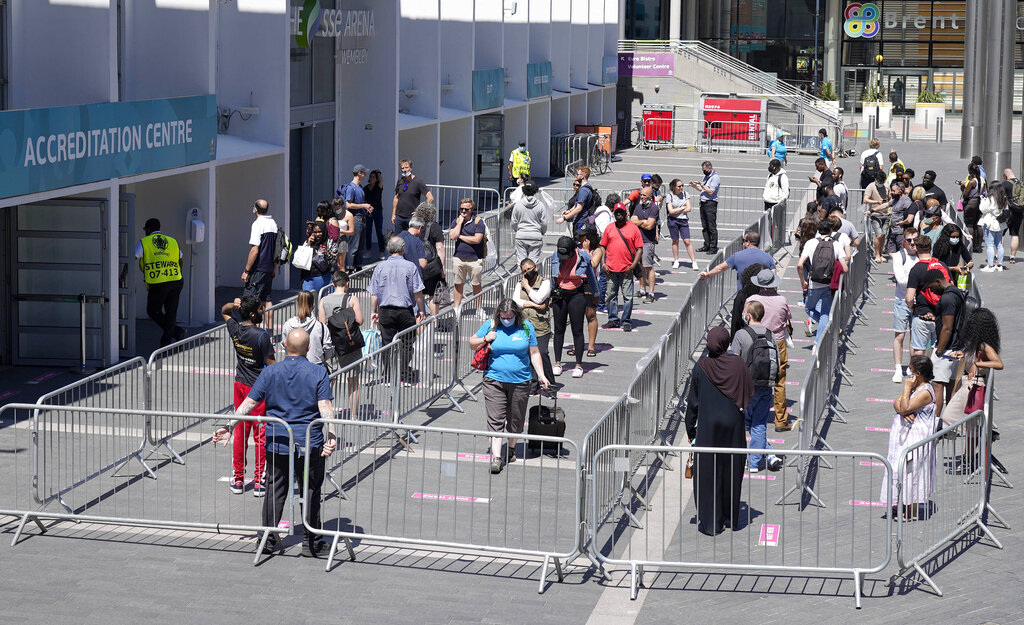 People queue for hours at the UEFA accreditation centre in the build-up to the upcoming Euro 2020 soccer championship in London, Wednesday, June 9, 2021. (Photo: AP)

MP: A lack of experience could prove telling for England in the latter stages of the tournament. The midfield, while undoubtedly talented, is particularly untested at international level with the exception of Jordan Henderson, who hasn't played since February.

4. Who will be top goalscorer?

MB: If England are going to win, then the form of Harry Kane is going to be key. The captain was top goalscorer at the 2018 World Cup, and I'm backing him to repeat that form this summer. 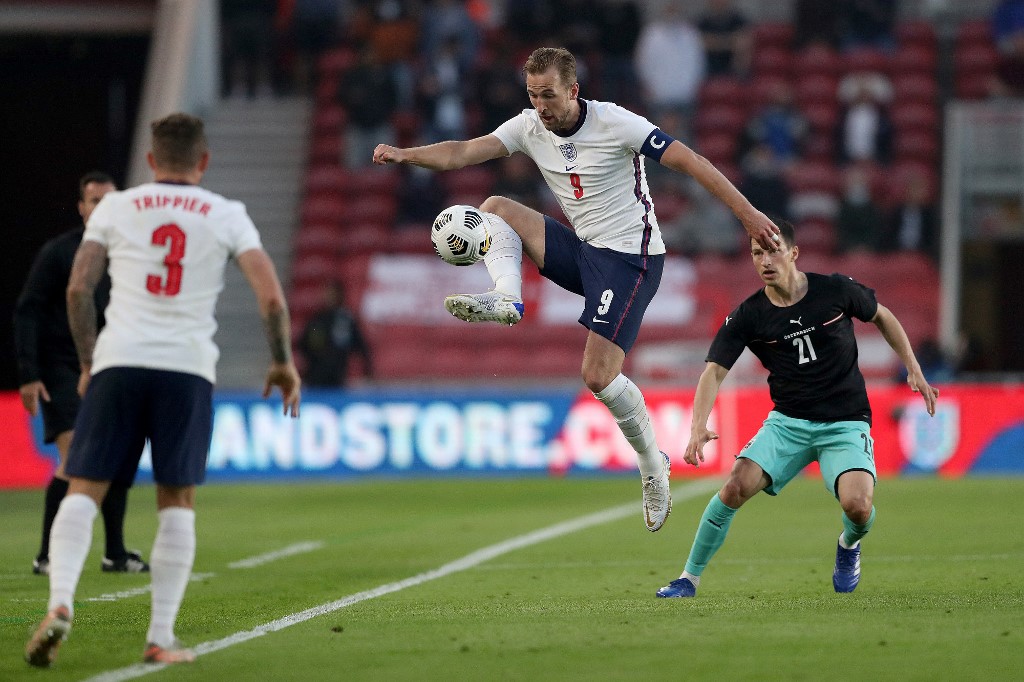 In this file photo taken on June 2, 2021 England's striker Harry Kane (C) controls the ball during the international friendly football match between England and Austria at the Riverside Stadium in Middlesbrough, north-east England. (Photo: AFP)

TT: I mentioned Belgium's defense earlier but going forward they're one of the better teams. If Kevin De Bruyne can recover fully from his head injury in the Champions League final I think they'll score plenty of goals, with Romelu Lukaku in line to win the Golden Boot.

JD: After proving his critics wrong, Serie A's top scorer Romelu Lukaku showed that he deserves to be considered one of Europe's elite strikers. The 28-year-old is in the form of his life and will be serviced by midfield maestro Kevin De Bruyne.

MP: Kylian Mbappe keeps getting better and is showing an increasingly voracious appetite for scoring, having netted 42 times in 47 appearances for PSG in 2020-21.

5. Who wins the award for the tournament's best player?

MB: If Kevin De Bruyne recovers from his facial injury in time, he's the best midfielder at the tournament. 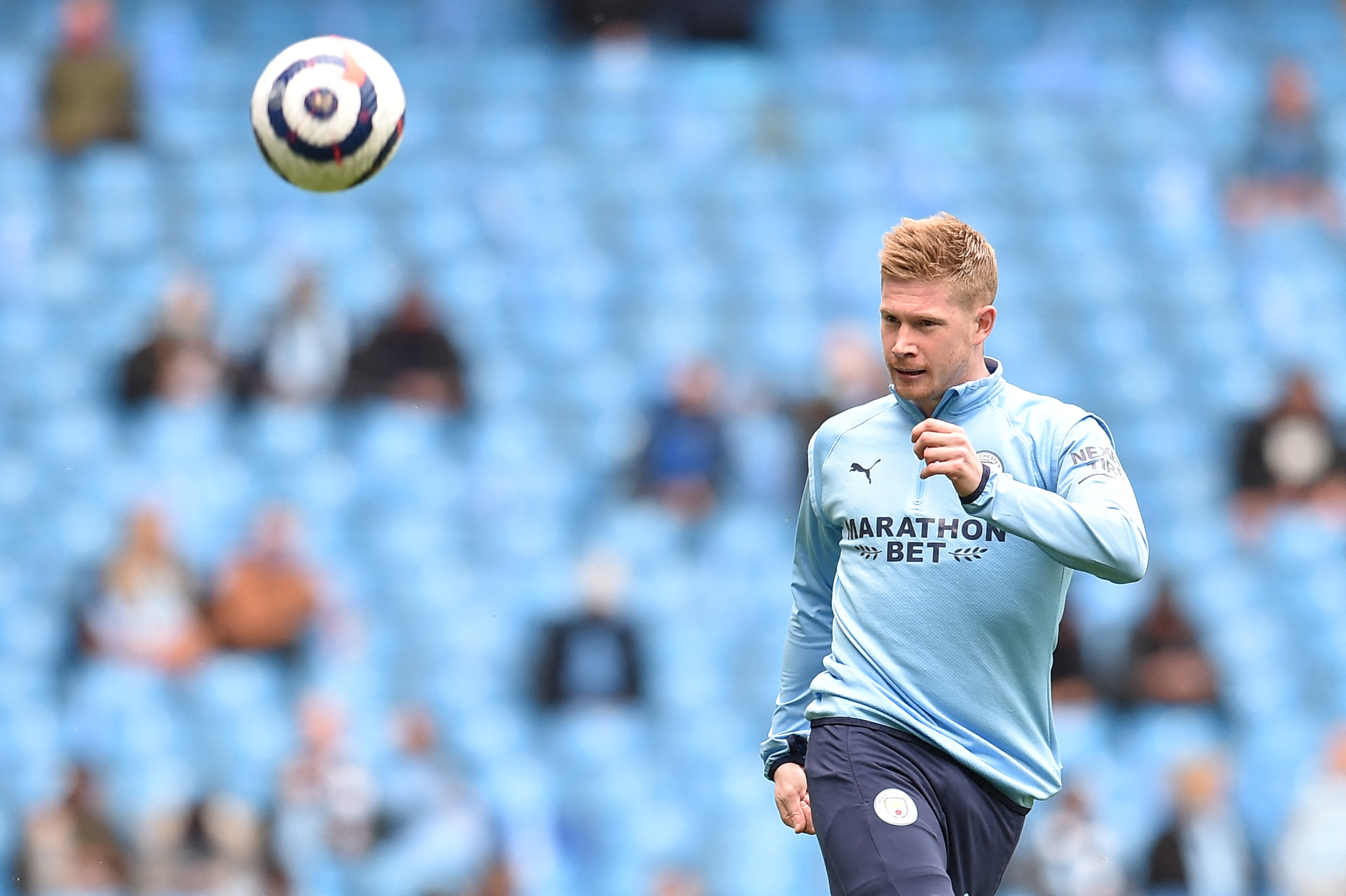 In this file photo taken on May 23, 2021 Manchester City's Belgian midfielder Kevin De Bruyne warms up for the English Premier League football match between Manchester City and Everton at the Etihad Stadium in Manchester, north west England. (Photo: AFP)

TT: This award is years in the making and I think the humble and softly-spoken N'Golo Kante finally gets the attention he's deserved for so long. It won't be easy for a defensive midfielder to win the award, but if anyone can do it, he can.

JD: If Italy are to go far in the tournament, they will need lynchpin Marco Verratti. Injured towards the end of the Ligue 1 season, he should be back in time for their opening clash against Turkey. Used by Mancini as an Iniesta-style playmaker, everything Italy does goes through the feet of the 28-year-old.

MP: Kylian Mbappe will know that a successful tournament could lead to a maiden Ballon d'Or and see him finally dethrone Lionel Messi and Cristiano Ronaldo as the undisputed best player in the world.

6. And the best young player?

MB: Donyell Malen is coming off a 27-goal season for PSV Eindhoven and is bound to liven up the Netherlands' attacking options. With the Dutch drawn in a relatively easy group, the 22-year-old should have plenty of chances to show his talent up front.

TT: Phil Foden has had an incredible season and is finally living up to his young superstar tag (I say 'finally' even though he's only 21; it feels like he's been around for years). He'll shine for an England side that should feel they are favorites, but will go out in the semis.

JD: Is it cheating to pick Kylian Mbappe as the tournament's best young player? At times it's easy to forget that France's star forward is still only 22. As he did three years ago in Russia, Mbappe will light up the competition, possibly leading France to more glory. 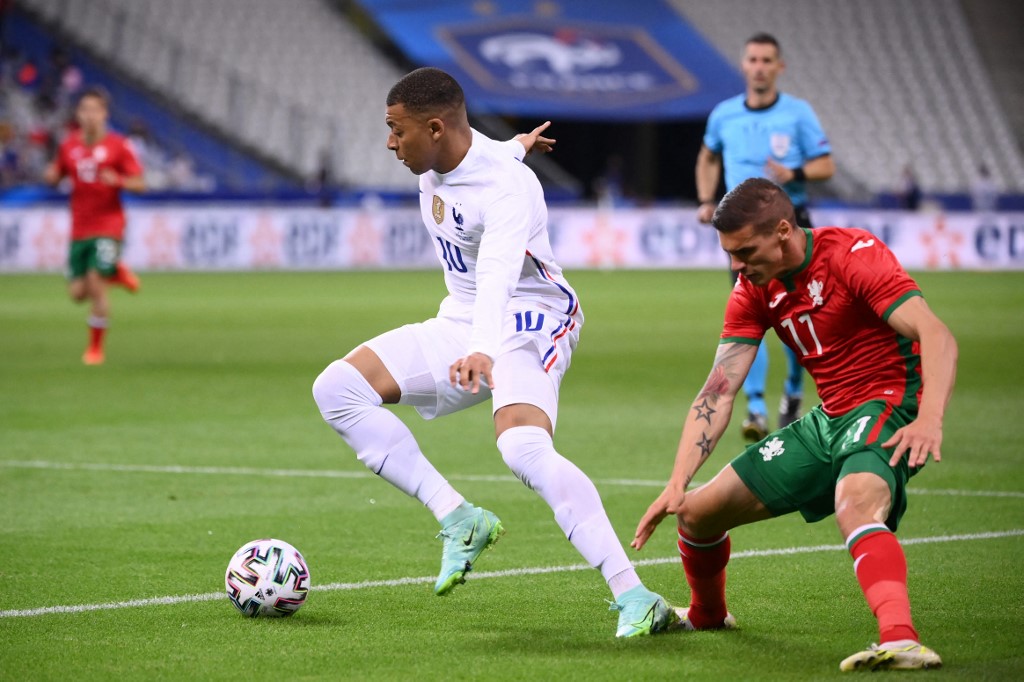 France's forward Kylian Mbappe (L) fights for the ball with Bulgaria's forward Kiril Despodov during the friendly football match France vs Bulgaria ahead of the Euro 2020 tournament, at Stade De France in Saint-Denis, on the outskirts of Paris on June 8, 2021. (Photo: AFP)

MP: 18-year-old Pedri's place in Spain's starting line-up is still not guaranteed, but the silky midfielder looks ready for the challenge after a breakthrough season at Barcelona.

7. And finally, who or what are you looking forward to the most?

MB: Seeing fans back in stadiums, especially in Budapest, where the Puskas Arena will be filled to 100 percent capacity.

TT: Finland have qualified for a major tournament for the first time, and who doesn't love a plucky underdog to root for? Led by marksman Teemu Pukki, who recently helped Norwich back to the Premier League, the Finns should be a lot of fun to watch. 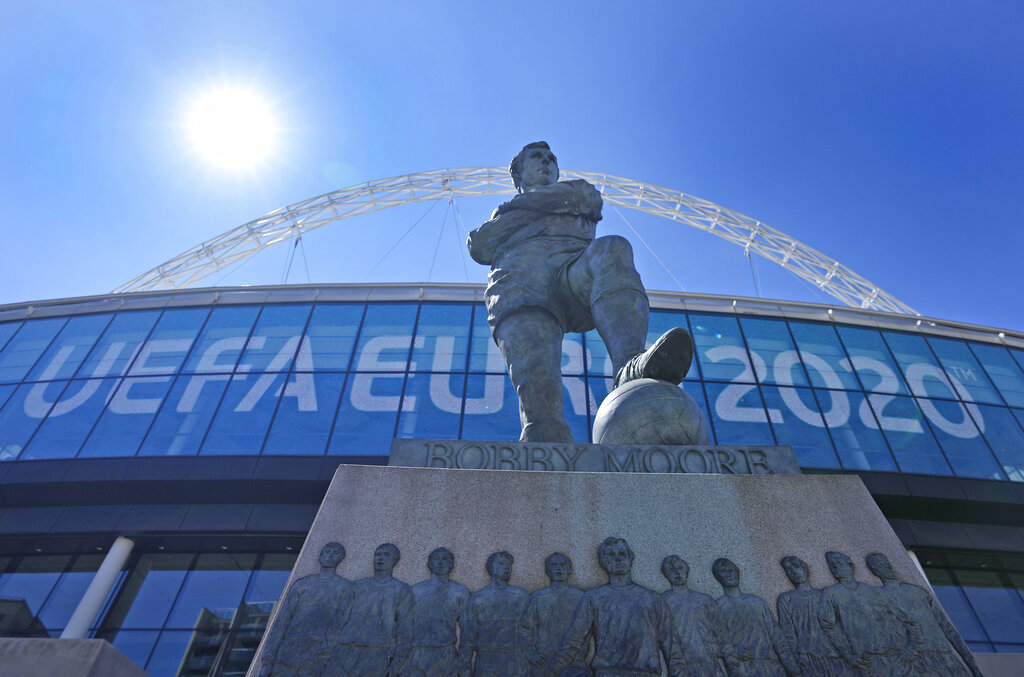 The statue of England's football legend Bobby Moore stands in front of the UEFA Euro sign at Wembley stadium entrance in the build-up to the upcoming Euro 2020 soccer championship in London, Wednesday, June 9, 2021. (Photo: AP)

JD: The return of big tournament football. The World Cup in Russia feels like a long time ago after the chaos of the intervening years and the delay to this year's competition. However, not many joys in life are as pure as following a tournament game by game, filling in your wallchart as you go. The highs, lows and drama of international tournaments are what every football fan lives for.

MP: Seeing and hearing fans back in stadiums.