England manager Sarina Wiegman said "the world will change" for her players after the Lionesses won Euro 2022 with a 2-1 extra-time victory over Germany at a sold-out Wembley Stadium on Sunday. 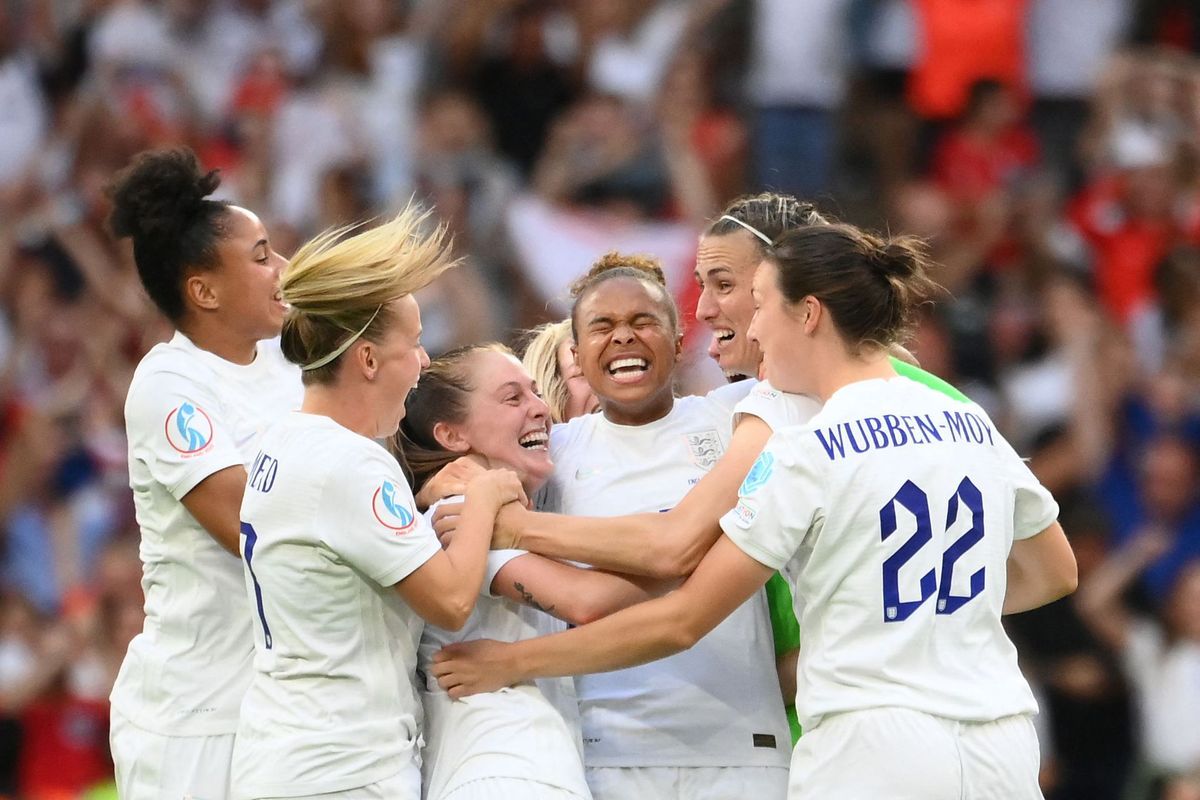 In front of a record crowd of 87,192 for any match in the history of the European Championships, Chloe Kelly prodded home the winner in the 110th minute to deliver England women's first ever major tournament win.

"The world will change, we know that," said Dutchwoman Wiegman, whose post-match news conference was interrupted by the England squad singing "football's coming home!".

"We change society and that's what we want, that's so much more than football.

Kelly only just made Wiegman's squad after fighting back from an anterior cruciate ligament tear to be fit in time for the tournament and made herself a national hero by being in the right place to pounce when Germany failed to clear a corner.

The Manchester City winger tore off her shirt in celebration in scenes reminiscent of Brandi Chastain's famous reaction to scoring the winning penalty at the 1999 World Cup for the USA.

"This is what dreams are made of, as a young girl watching women's football," said Kelly, who broke off a post-match interview to join in a chorus of Sweet Caroline with the crowd and her teammates.

"Thank you for everyone who played a part in my rehab. I always believed I'd be here, but to be here and score the winner, wow. These girls are amazing."

But 56 years on from England's last major tournament win in either the men's or women's game, it was not to be denied victory.

Queen Elizabeth II led the tributes to the Lionesses, calling them "an inspiration for girls and women today, and for future generations".

Fortune did not favor Germany, who lost captain and top scorer Alexandra Popp to a muscle injury in the warm-up.

Germany boss Martina Voss-Tecklenburg was also furious that a penalty was not awarded in the first half for a handball by England captain Leah Williamson.

But England will feel its time for some luck was due as 12 months on from the Three Lions' defeat on penalties to Italy in the Euro 2020 men's final, the nation's women went one better.

"It's the proudest moment of my life. I'm taking in every single second because I'll want to relive this for a long time."

Under Wiegman, England is unbeaten in 20 games but was pushed to the limit by the eight-time winner despite missing the massive presence of Popp, who had scored six goals in five games en route to the final.

Strength in depth has been one of the key features of England's success under Wiegman and the Dutch coach turned to Alessia Russo and Toone to change the game as they did in the quarterfinal win over Spain.

The changes worked to perfection once more as Toone timed her run through the heart of the German defense to latch onto Keira Walsh's pass, showing great composure to coolly lift the ball over Frohms.

Lesser sides than the eight-time champion would have been broken, but Germany immediately pushed forward in search of an equalizer.

The excellent Magull smashed a shot off the post and Popp's replacement, Lea Schueller, should have converted the rebound rather than rolling the ball into the arms of the grateful Mary Earps.

Voss-Tecklenburg's side kept applying the pressure, and fittingly it was Magull who sent the game to extra time as the Bayern Munich midfielder slotted Tabea Wassmuth's cross into the roof of the net.

Both sides felt the pace of a physical encounter in the extra 30 minutes.

England just had enough left in the tank to finally get the job done as Germany failed to deal with the second ball from a corner and Kelly's telescopic right leg flicked the ball home.

"Enjoy the free rounds of pints and dinners for the rest of your life from all of England," Chastain tweeted to Kelly.

After decades of disappointment, a major tournament trophy has come home for England fans.