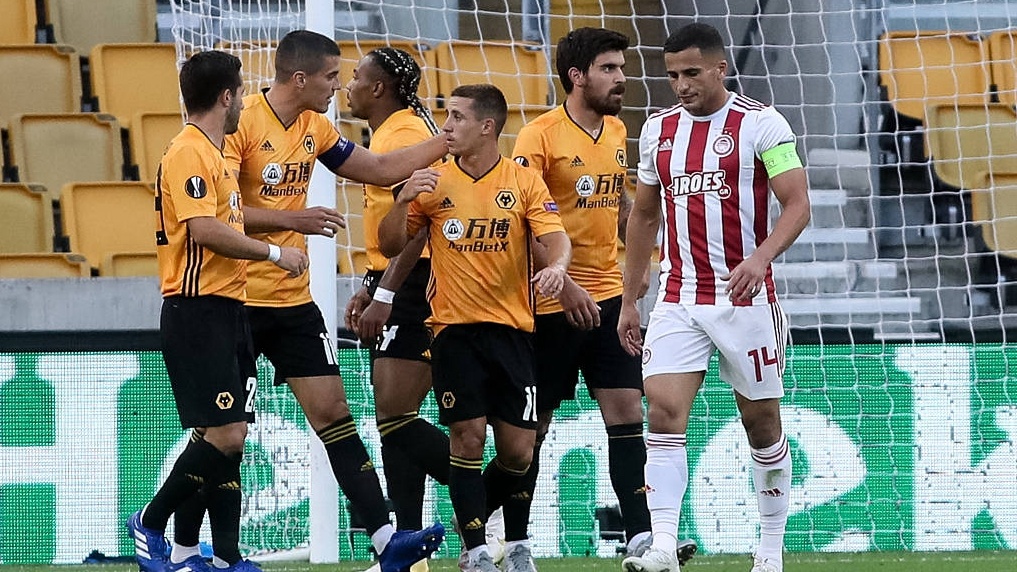 Wolves players celebrate as the Premier League side edge out Olympiakos in the Europa League at Molineux Stadium, Wolverhampton, England, August 6, 2020. (Photos: VCG)

Wolves reached their first European quarter-finals in 48 years on Thursday while Sevilla, Bayer Leverkusen and Basel enjoyed far more comfortable victories in the matches that brought the Europa League round of 16 to a belated close.

Raul Jimenez scored the only goal from the penalty spot in the ninth minute and Wolves survived a series of scares to edge Olympiakos 1-0 at Molineux for a 2-1 aggregate win in a tie that began in Athens on March 13.

Sevilla cruised past Roma 2-0 in a one-off Europa League game played at neutral Duisburg, which will one of the host grounds when the Rhineland region of Germany hosts the last three rounds of the competition from August 10-21.

At Molineux, Bobby Allain, the visitors' Franco-Scottish goalkeeper, failed to control a back pass in the seventh minute.

Daniel Podence, who scored for Olympiakos at Tottenham in September but moved to Wolves in January, darted in and stole the ball.

Allain clumsily bundled his former clubmate over and Jimenez converted the penalty. 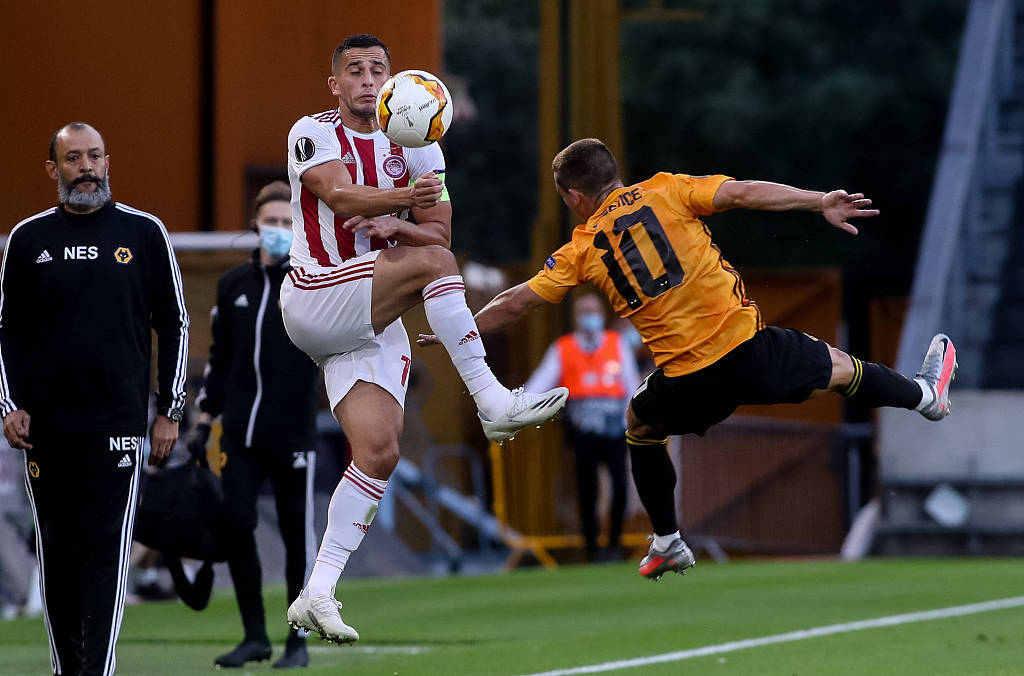 The Greek champions, who had drawn at Tottenham in the Champions League and won at Arsenal in the Europa League this season, responded by dominating possession.

They created a string of chances but were thwarted by good saves by Rui Patricio, a tight offside decision and their own inaccurate finishing.

Wolves, who began their Europa League campaign on July 25 last year against Crusaders in the second qualifying round, will next face Sevilla at Duisburg on August 11.

"A long, long season," Jimenez said. "Now we are in the quarter-finals and we want to keep going."

Sevilla were also in Duisburg on Thursday where they took the lead against Roma after 22 minutes. Captain and right back Jesus Navas switched play with a cross-field pass to left back Sergio Reguilon that caught Roma flat-footed.

Reguilon surged past two defenders and into the box before sliding a low shot past Spanish goalkeeper Pau Lopez's foot.

Sevilla added a second on the counter-attack in the 43rd minute.

Lucas Ocampos burst down the right and after Lopez failed to cut out the low cross, Youssef En Neysri finished into an empty net from close range. 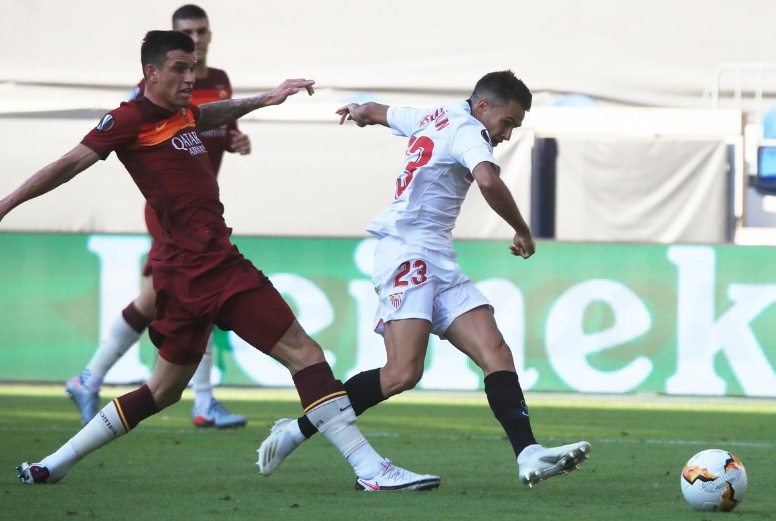 Sevilla, coached by former Spain boss Julen Lopetegui, dominated as they stretched their unbeaten run to 18 games in all competitions and kept on course to add to their record five Europa League titles.

"We are a team in every sense of the word. We want to win this tournament, we want to win everything we can," said Reguilon.

It was a tame end to a dramatic day for Roma. The club announced earlier Thursday that it had been bought by U.S. billionaire Dan Friedkin for 700 million U.S dollars.

"We've got to accept that Sevilla were superior," said Roma coach Paulo Fonseca.

In Basel, defender Fabien Frei scored the only goal in the 88th minute as the home team won 1-0 to complete an aggregate 4-0 victory over Eintracht Frankfurt.

In Leverkusen, Moussa Diaby scored the only goal after 51 minutes to complete a comfortable victory for Bayer, who won 3-1 in Glasgow in March.

"We had the chances to score one or two more times tonight and in the rounds to come we have to make sure that we're more clinical," said Leverkusen captain Lars Bender. "But the most important thing about tonight was getting the ball rolling, avoiding injuries and re-establishing rhythm."

In the quarter-finals, Bayer will make the short trip to Dusseldorf to face Inter Milan on August 10, Basel will play Shakhtar Donetsk in Gelsenkirchen the next night.