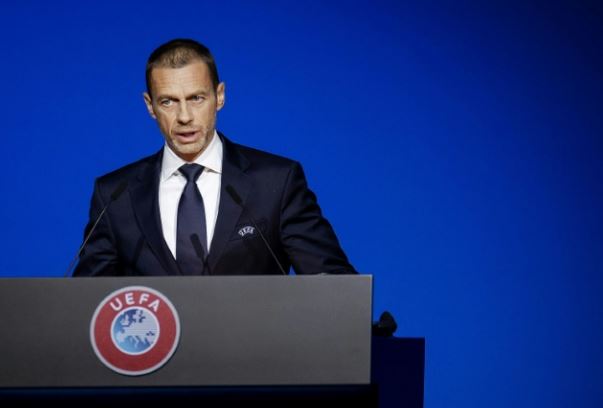 Europe's football bosses have not given up hope of finishing this pandemic-hit season -- even if it might have to be done at the start of the next one.

The novel coronavirus has created an existential challenge to the world's most widely played and watched sport.

Europe's football leagues are the planet's richest and can afford to pay the most money to the biggest stars.

But that system could come crumbling down quickly if there is nothing to show on TV.

Cristian Ronaldo has not had a chance to celebrate goals for Juventus for nearly three weeks because Italy's Serie A had to shut down.

He and other Italian league stars are thinking of giving up millions of euros in salary to help their teams stay solvent.

UEFA boss Aleksander Ceferin told Italy's La Repubblica daily that he was holding urgent talks with the continent's biggest leagues to figure out what can be done.

The Slovenian said all options were under consideration in an effort to salvage the season and preserve the sanctity of the beautiful game.

"We could start again in mid-May, in June or even late June," Ceferin said.

Any time after that and "the season will probably be lost."

The idea of the entire season simply being cancelled stirs panic in fans of clubs such as Liverpool -- on the cusp of lifting their first title in 30 years.

Ronaldo's Juventus would probably not be terribly happy either. The men in the famous black-and-white stripes are edging Lazio by a point in their race for a ninth successive title and are still in the Champions League, which they have not won since 1996.

Ceferin said he opposed the idea of playing games in empty stadiums and would prefer to wait out the pandemic.

He also hinted that some big teams appeared ready to delay the start of next season in ordered to finish out this one.

"There is also a proposal to end this season at the beginning of the next one and then start the next one a little later," Ceferin said.

Serie A and most other European leagues were originally supposed to have finished in May.

Belarus remain the only European nation still playing football in the face of a pandemic that by Saturday had officially claimed nearly 30,000 lives.

But the scheduling is growing tricky and time appears to be running out.

Most European leagues are supposed to start their 2019-20 seasons at the end of August.

Italy still has more than two regular months of matches of the 2018-19 season to play out.

A resumption of the current season at the end of June would probably require a delay to the start of the next one until at least September or October.

It would also mean that players get very little rest and would also create problems for those whose contracts are expiring in June.

"We would all be happy to finish the season on the pitch," said Gravina told Sky television.

"We are in contact with FIFA for contract extensions if we need to go beyond June 30."

Gravina did not explain why he was talking to the world football governing body and not the European one headed by Ceferin.

But he did conceded that his earlier hope of restarting Italian matches in early May was now almost certainly dashed.

"I am aware that it is still too early," said Gravina. "But we must think positively."