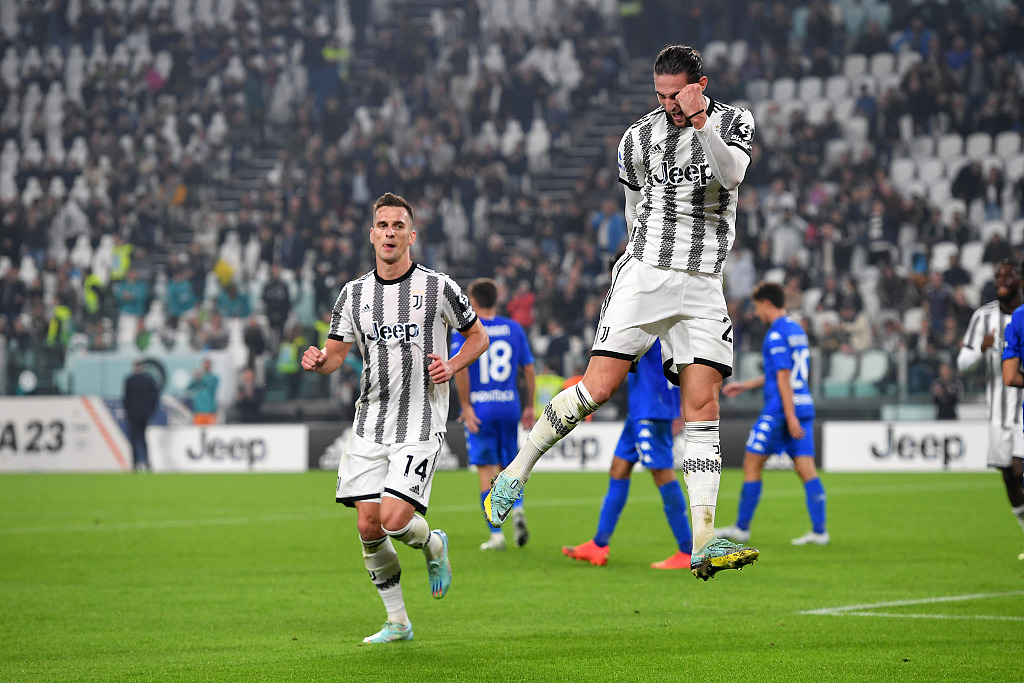 Adrien Rabiot (R) celebrates after scoring a brace against Empoli during their Serie A match at Allianz Stadium in Turin, Italy, October 21, 2022. (Photo: CFP)

Juventus comfortably beat Empoli 4-0 in Friday's Serie A match ahead of their Champions League clash at Benfica which could seal their elimination from Europe's top club competition.

Goals in each half from Moise Kean and Weston McKennie and a late Adrien Rabiot brace gave struggling Juve their second straight win in Italy's top flight, the first time this league season that they have managed to win two matches in a row.

Kean's eighth-minute opener, tapped in from Filip Kostic's cross, was his first league goal of the season and rewarded Allegri's decision to start the Italy international ahead of in-form forward Arkadiusz Milik.

The 22-year-old thought he had another shortly after McKennie headed in Juve's second in the 56th minute, a header of his own from another Kostic cross ruled out for offside.

It was France international Rabiot who rounded off the scoring, first forcing another header just across the line from Juan Cuadrado's corner with eight minutes remaining before tapping home the fourth in stoppage time.

Meanwhile, Kylian Mbappe scored a brace of goals to help Paris Saint-Germain (PSG) consolidate their place atop the Ligue 1 table with a 3-0 win over Ajaccio on Friday.

Mbappe opened the scoring against a side sitting 18th in the table in the 24th minute thanks to a clinical counter-attack on the back of an inch-perfect, long pass from Lionel Messi.

The Argentinian scored one of his own in the 79th minute before Mbappe nabbed his second just minutes later to go on top of this season's top scorers with 10 goals.

Recently, Messi said Argentina should not fear any team at the World Cup but he urged fans to stay calm with the tournament in Qatar less than a month away.

Copa America champions Argentina, unbeaten in 35 games since 2019, were drawn with Saudi Arabia, Mexico and Poland in Group C as they look to win their first World Cup title since 1986.

"Today we are doing well and people are excited and think that we will come back with the Cup, but it is not like that," Argentina captain Messi told broadcaster Directv Sports.

"We are eager, we are going to fight, we are not afraid of anyone because we are ready to play against anyone, but with peace of mind."