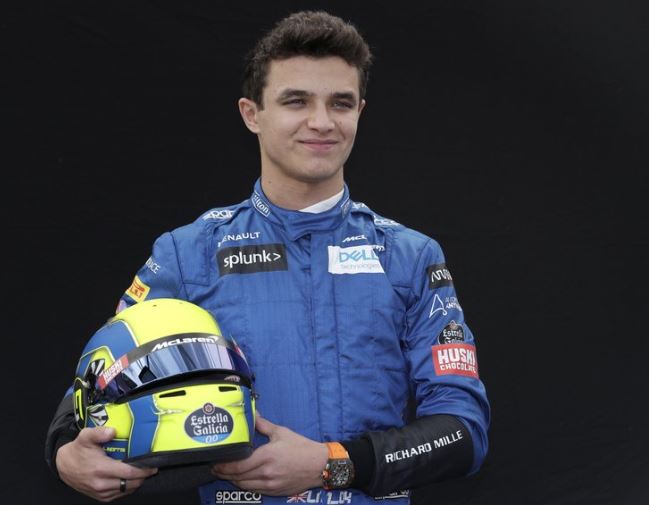 McLaren driver Lando Norris, of Britain, poses for a photo at the Australian Formula One Grand Prix in Melbourne on Mar. 12, 2020. (Photo: AP)

Formula One driver Lando Norris embarrassed the field in his IndyCar iRacing debut by dominating Saturday’s race at virtual Circuit of the Americas in Texas.

Norris was poised to begin his second F1 season with McLaren in March when a team member tested positive for the new coronavirus at the season-opening Australian Grand Prix and the series immediately suspended competition.

The 20-year-old British driver is a skilled iRacer and competed in the virtual event for Arrow McLaren SP, an IndyCar team that McLaren partnered with for this season to enter the American series.

Norris dominated qualifying to start from the pole and relinquished the lead during a pit stop. He then picked his way back through the 33-driver field on the virtual road course in Austin, Texas, and regained the lead with four laps remaining when Felix Rosenqvist spun.

Norris overcame a spin after his pit stops, then a challenge from Arrow McLaren rookie Patricio O’Ward.

“It was a tough race especially Pato chasing me down on new tires at the end,” Norris said. “I didn’t think I’d get back to the front after that spin.”

Norris had more than 20,000 viewers streaming his race on the gaming app Twitch as he crossed the finish line — numbers that dwarf any of the regular IndyCar competitors.

“It was good, but man, Lando is quick in the SIM,” said O’Ward, who turns 21 in May and is re-adjusting to racing on a simulator after letting it sit idle during real competition.

“I just got it back up and running ever since we started this iRacing challenge in IndyCar. But I’m proud that we got 1-2, I was pushing hard at the end to get to him and couldn’t get him.”

Norris, who competed via an invitation from IndyCar, said he uses the simulator as a tool to sharpen his skills. He said his rig “is the best stuff you can get, which is important because I really see using SIM to help my driving and work with my engineer.

“I don’t just use it for fun, I use it for a lot of work. To replicate things in real life.”

IndyCar had planned to compete next race at “a dream track” not currently on the circuit for what is supposed to be the series’ iRacing finale. Instead, the series announced after the race it will compete next weekend at Indianapolis Motor Speedway in a 175-mile event for a 33-driver field. The league will give guaranteed spots to all full-time IndyCar entrants, as well as any winner of a previous iRacing event, which makes Norris, Australian V8 SuperCars champion Scott McLaughlin and part-time IndyCar driver Sage Karam eligible.

The remaining slots in the field will be determined by a Wednesday qualifying session that mimics actual Indy 500 qualifying — drivers will earn their starting position based on their average speed over four laps.

IndyCar suspended its season two days before the March 15 opening race and the Indianapolis 500 has been moved to August. The series is hoping to start its season June 6 at Texas Motor Speedway, the next race on the schedule that has yet to be canceled or postponed.