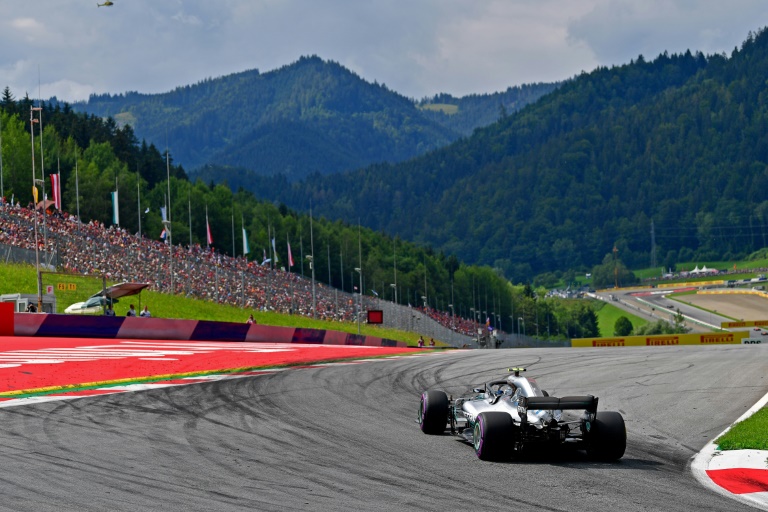 Formula One's truncated coronavirus-hit season will finally get underway with the Austrian Grand Prix on July 5, the Austrian government announced on Saturday.

The Spielberg circuit has also been given the green light to stage a second race the following weekend.

"The two Formula One races on July 5 and 12 at Spielberg will be staged without spectators," announced Austrian Health Minister Rudolf Anschober.

He said that the two races had been approved after F1 organisers "had presented a complete and professional plan" to combat the spread of COVID-19.

The F1 season was thrown into chaos with the cancellation of the traditional curtain-raising Australian Grand Prix in March only hours before practice was due to begin.

Melbourne was one of 10 races either cancelled or postponed, yet F1 boss Chase Carey believes a 15-18 race season is still possible.

But Silverstone's hopes of also staging back-to-back races after Austria are in the balance after the British government insisted that all arrivals in the country undergo a two-week quarantine period.

Anschober added a caveat to Saturday's statement, insisting the season's belated restart would only go ahead if all the health assurances made by F1 were fulfilled.

"In addition to strict hygiene measures the plan also involves regular testing and health check-ups for teams and all the other employees," he said.

"The crucial element will be the close coordination between the organisers and the regional and local health authorities"," he added.

With a local airport, the races can be held in an isolated environment, essential in the fight against the pandemic that has killed less than 700 people in Austria, and more than 364,000 worldwide.

"One of the logistical challenges is getting everyone tested and cleared to enter the racing environment," Brawn explained in an F1 Nation podcast.

"Once we do that, it's very attractive to keep everyone in that environment, within that biosphere that we want to create, for another race.

"Austria fits that bill very well. It has a local airport right next to the circuit, where people can charter planes into. It's not too close to a metropolis."

The 2020 F1 season was to have featured a record 22 races, now it is set to be one of the shortest campaigns for over a decade.

Carey outlined the blueprint for the rehashed season this month, involving additional European races through the traditional August break.

"We will then plan to race in Asia and the Americas in September, October, November before finishing in the Gulf in Bahrain and Abu Dhabi in December," he said.

He added: "We expect the early part of the calendar to be races without fans, but we hope to be able to allow fans to attend in the latter part of the year."

Germany's Bundesliga became the first of Europe's top football leagues to return this month with Spain's La Liga, Italy's Serie A and England's Premier League kick-starting their interrupted seasons over the next few weeks.

While there may have been no racing up to now there has been plenty going on behind the scenes, with Carlos Sainz replacing Sebastian Vettel at Ferrari for 2021 and Daniel Ricciardo joining McLaren.

Given the massive financial hit teams have taken and the worry that some might go bust, the proposed all-new technical landscape due to be implemented next season has been pushed back to 2022.

And a spending cap of $145 million has been introduced for next year in an attempt to stem the bleeding, with teams like McLaren making significant job cuts.

One man itching for the season to begin is Lewis Hamilton, who is hoping to equal Michael Schumacher's record of seven world titles.