Chinese international Wu Lei of Espanyol, which was relegated to Spain's second division following its 0-1 lost to Barcelona in a Catalan derby on Wednesday. (Photos: Xinhua)

Chinese international Wu Lei's Espanyol lost to Barcelona 0-1 on Wednesday night, condemning the Catalan club to relegation to Spain's second division next season, and prompting fans across China to engage in a heated debate on what Wu's next move should be.

A multiple winner of the Chinese Super League's Golden Boot award during a 12-year spell with Shanghai SIPG, Wu has scored eight goals for Espanyol so far in the 2019-20 season, leading some to suggest the Nanjing-born forward should consider moving on to pastures new.

"Wu Lei has scored in all competitions this season, including La Liga, the Europa League and the Copa del Rey. The club's relegation is not on him. What's more, it's hard for a 28-year-old to improve when playing in the second division, so he should leave in the summer transfer window," said a fan named "Liverpool legend Virgil" on China's All Football app.

In a survey featuring 25,000 fans discussing Wu's future, 67.5 percent wanted him to leave Espanyol. Only 14.3 percent hoped the Chinese forward would stay at the Barcelona-based club, although Wu said in a recent interview that he had no plans to leave and would stay with the club as long as it needs him.

"Wu Lei's choice to stay on is the most appropriate option. If he quits the style of the Spanish league and environment to which he has adapted, and moves to another league, he would have to once again adapt to a new environment and a new club. That route is a bit adventurous," said a netizen named "Hubert-zhu" on the Hupu forum.

Wu had been linked with a move to English Premier League side Wolverhampton Wanderers, who are owned by Chinese investment firm Fosun. Although Wu dismissed those rumors, some fans expect to see him in the EPL soon.

"Wu Lei is waving the flag for Chinese football, just like Son Heung-min has done for South Korea, so he should have a go in the EPL. His outstanding speed and skill at breaking the offside trap may help him establish in the league," said an internet user named "Nanshan Kid" on the TikTok platform.

However, China's well-known football commentator Huang Jianxiang isn't sure how well Wu would adapt to English football. "The EPL is not suitable for Wu Lei. In my opinion, the league needs footballers who are physically strong, and few Asians are able to adapt to these tough games," Huang explained. 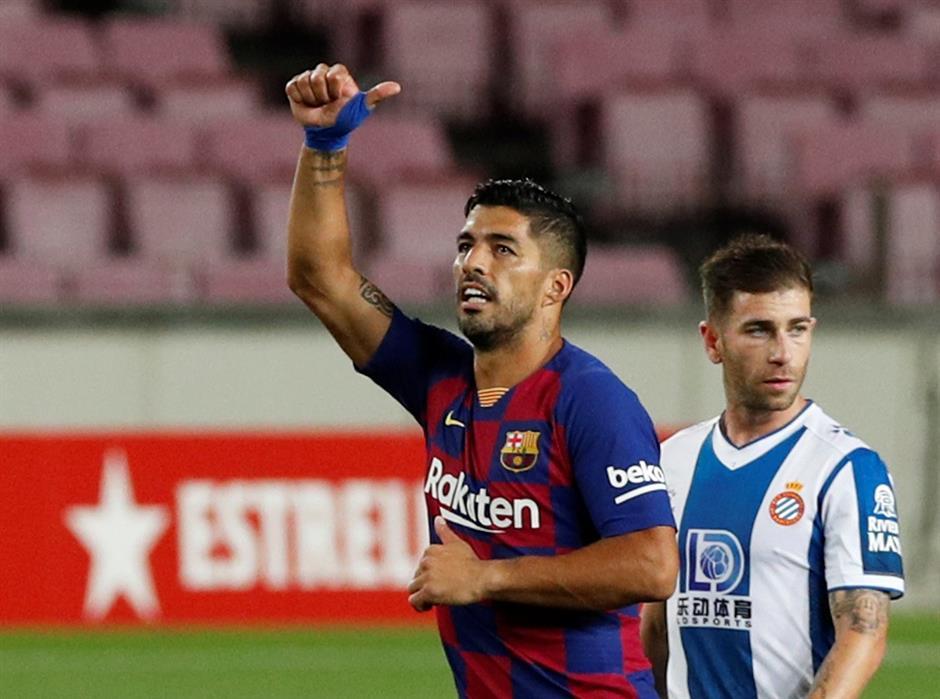 Barcelona's Luis Suarez celebrates scoring the only goal against Espanyol during their Spanish league match at the Camp Nou Stadium in Barcelona on Wednesday.

In addition to England's top division, some fans want Wu to consider playing in other major leagues in Europe, such as Germany's Bundesliga or the Italian Serie A.

"I think Serie A suits Wu Lei well. Italian teams attach more importance to tactics and the counterattack would be more suitable for him," said Hupu forum user "Komalai".

"Chinese players Yang Chen and Shao Jiayi had a good time in the Bundesliga, and the league may be more friendly to  Asian players, I'd like Wu Lei to continue his career in Germany," "Chen Xiaoyang" said on Sina Weibo.

Luis Suarez scored the winning goal early in the second half to move Barcelona within a point of leader Real Madrid and send Espanyol to the second division after 26 straight seasons in the top flight.

Real  can reclaim a four-point lead with three rounds left with a home win against relegation-threatened Alaves today. Real, seeking its first league title in three years, has a perfect record since the league resumed following the coronavirus break.

Only a win in the city derby could have kept last-place Espanyol with a chance of staying in the top tier. The club owned by Chinese businessman Chen Yansheng hasn't played in the second division since the 1993-1994 season. It had been among the teams with most consecutive seasons in the top flight, along with Barcelona, Real and Athletic Bilbao.

“We have to apologize to our fans for what we have made them go through,” Espanyol captain Javi Lopez said. “This is a difficult moment. Nothing went right for us this season. We are committed to coming back stronger.”

It was the sixth straight loss for Espanyol, and its 11th consecutive league defeat away to Barcelona at the Camp Nou. It has 24 points from 35 matches — 11 points from safety.