DOHA, Dec. 10 (Xinhua) -- Both Argentina and the Netherlands face disciplinary action from FIFA as a result of some ugly scenes towards the end of their dramatic World Cup quarterfinal match at Lusail Stadium on Friday night. 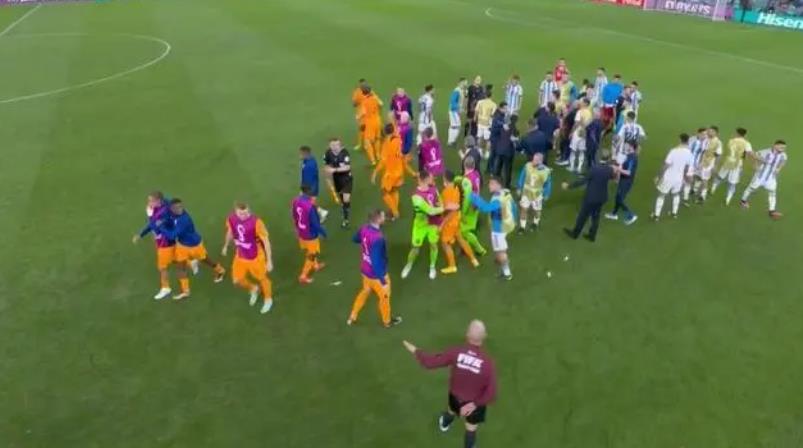 The first major incident in the game, which Argentina won on penalties after surrendering a 2-0 lead to a late Dutch fightback, came in the 89th minute, after Leandro Paredes committed a nasty foul on Dutch defender Nathan Ake and then slammed the ball into the Netherlands' dugout.

That saw players and technical staff from both teams involved in pushing and shoving, and hostilities were resumed after Wout Weghorst equalized for the Netherlands in the 10th minute of injury time.

"The FIFA Disciplinary Committee has opened proceedings against the Argentinian Football Association due to potential breaches of articles 12 (Misconduct of players and officials) and 16 (Order and security at matches) of the FIFA Disciplinary Code during the Netherlands v. Argentina FIFA World Cup match that took place on 9 December," FIFA informed on Saturday.

The Netherlands also has to face an investigation for "potential breaches of article 12 of the FIFA Disciplinary Code in relation to the same match."

Spanish referee Mateu Lahoz has been much criticized for his handling of the game in which he showed 16 yellow cards, with Lionel Messi saying after the game that, "I don't want to talk about the referee, because you can get a suspension, but people saw what happened. FIFA have to look at that, they can't put in a referee who isn't up to the job at this stage."

Dutch midfielder Frenkie de Jong implied that Mateu had been influenced by Messi.

"As soon as normal time ended [Argentina] went for him. From that moment he only whistled for Argentina. It was really scandalous. I think he lost his way in extra time," he commented.