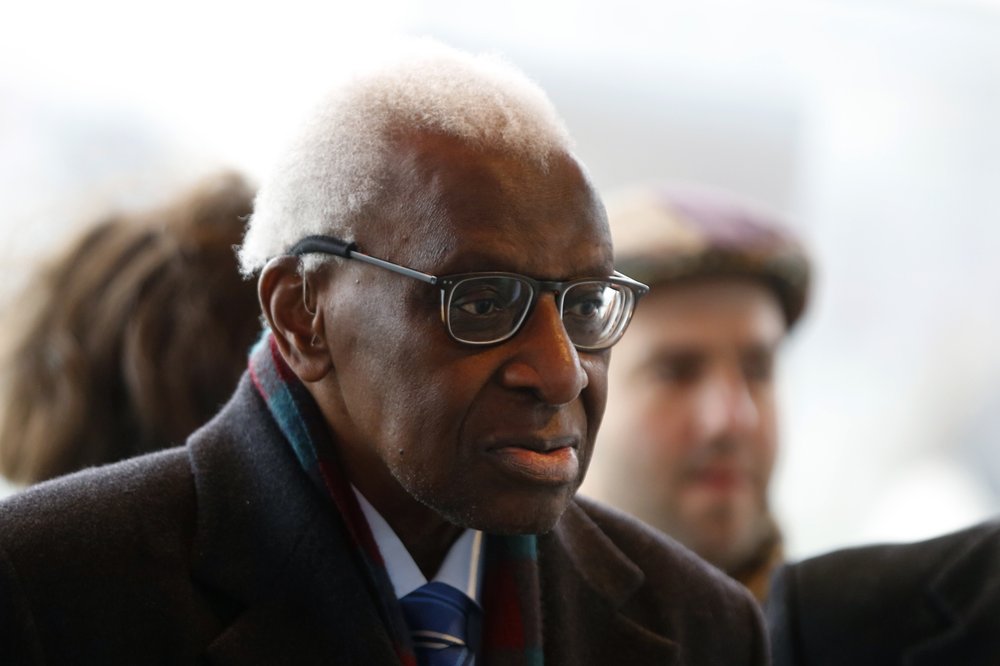 The corruption trial involving the former president of track and field’s governing body was suspended Monday shortly after it began.

Lamine Diack, the former head of the IAAF, has been charged with far-reaching corruption and doping cover-ups.

At the opening of the hearing, the prosecution asked that the two-week trial be delayed to weigh new evidence received from Senegal, where Diack was born. His son, Papa Massata Diack, also charged in the case, lives in Senegal, shielded from an international arrest warrant issued by France.

The prosecution also asked for the delay to clear up a procedural technicality regarding one of the charges against Papa Massata Diack. There will next be a hearing in April to see whether a new trial date in June is feasible.

Addressing the court, the 86-year-old Diack asked that in the wake of the delay he be allowed to travel to Senegal to visit his elder brother, who recently celebrated his 100th birthday. Diack has not been allowed to leave France since his arrest in 2015. But he promised the court that he would come back to France if allowed to travel, saying he wants to clear his name.

“I want to clear up all of this,” Diack said. “I will clean my honor.”

The court refused his request.

Leaving the hearing, Diack said: “I have a lot to say, but not now.”

The trial had been expected to detail the evidence that Russian athletes paid millions of dollars to hide their suspected doping so they could compete at the Olympics in 2012 and other competitions.

Diack, who served as president of the sport’s governing body for nearly 16 years, is accused of soliciting the payments.

Prosecutors said they received the new evidence — three thick folders of notes that they hold up in court — on Monday only hours before the hearing opened. They said it included statements that Papa Massata Diack made to investigators in Senegal and banking details from three of his consultancy firms.

Lamine Diack’s lawyer, William Bourdon, said delaying trial was bad for everyone. He pleaded for Diack to be allowed to leave France, saying: “This man will come back and explain himself.”

In refusing to lift the travel ban, the court noted that France wouldn’t be able to get Diack back from Senegal if he refused to return of his own accord because the west African nation does not extradite its citizens.

As IAAF president, Lamine Diack was one of the most influential men in Olympic sports, presiding over an era when Usain Bolt made track and field wildly popular. But Diack’s legacy, and the IAAF’s credibility, took a beating after he stepped down in 2015. He was arrested in France and investigators revealed accusations of athletes being squeezed for payments to cover up their doping cases.

He is being tried for corruption, money laundering and breach of trust. Prosecutors say he directly or indirectly solicited 3.45 million euros ($3.8 million) from athletes suspected by the IAAF of doping who paid to have their names cleared so they could continue competing.

Prosecutors also charged Diack for involvement in a $1.5 million payment from Russia for use in electoral politics in his native Senegal. Prosecutors say the money was creamed off sponsorship and TV rights deals, negotiated with Russian officials. Prosecutors say the money was to finance presidential and legislative election campaigns in Senegal in 2012, in exchange for slowing down doping cases targeting Russian athletes.

Papa Massata Diack also faces corruption, money laundering and breach of trust charges. Senegal has refused France’s extradition requests for the former IAAF marketing consultant. His legal team said in court on Monday that he would not attend the hearing.

But he has been heard in Senegal, interviewed by investigators in November. The statements he made then form part of the new evidence submitted Monday by the prosecution.

Also being tried for corruption and present in court was a lawyer who advised Diack, Habib Cisse, and a doctor, Gabriel Dolle, who oversaw drug-testing at the IAAF and is accused of taking payments to delay doping cases. Two Russians are also on trial but did not attend the hearing: Valentin Balakhnichev, a former IAAF treasurer, and Alexei Melnikov, a coach who led Russia’s long-distance running program.