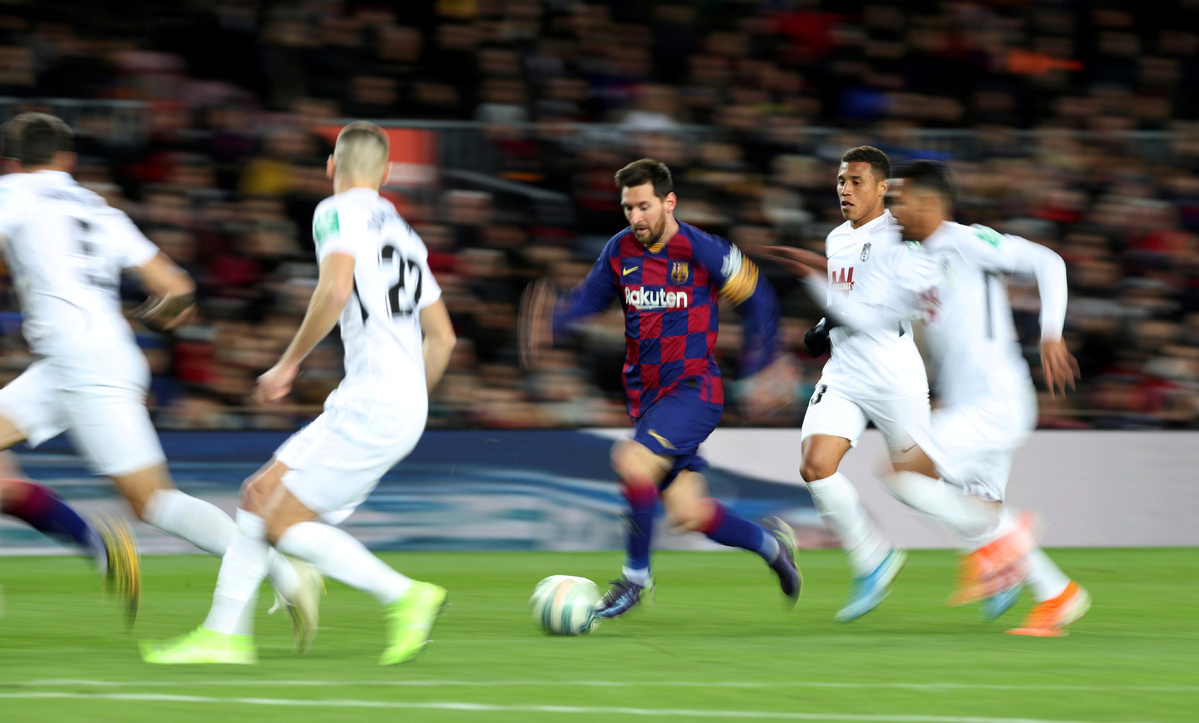 Barcelona's Lionel Messi in action during the match against Granada in Barcelona, Spain, January 19, 2020. (Photo: Agencies)

MADRID - Real Madrid and FC Barcelona both bounced back from midweek Cup exits in the 23rd round of matches in Spain's La Liga Santander, while Getafe's excellent season continued with another big win. Here are some things we learned this weekend in Spain.

1. Messi the key even when he doesn't score

Barcelona's 3-2 win away to Betis was the third game in which Leo Messi hasn't scored, but anyone who thinks that means his influence is declining would be very wrong.

Although Messi failed to hit the net in the Benito Villamarin Stadium (thanks partly to two good saves from Betis keeper Joel) he provided the assist for every one of Barca's three goals.

The same thing happened in Barca's 2-1 win at home to Levante last weekend, with both of the goals following a pass from the Argentinean, while his mere presence on the pitch creates more space for his companions.

Even when he isn't scoring, Messi is vital for Barca.

2. Big teams first and second for a reason...

Real Madrid and Barca may have crashed out of the Copa del Rey in midweek, but both were able to bounce back from their Cup defeats with wins on Sunday, while other teams who played in the Cup, such as Valencia, Athletic Club and Granada all struggled.

The main reason for this is of course that Madrid and Barca have more money, and more money means deeper squads. The start to the year in Spain is incredibly intense with two games a week for sides that progress in the Cup until beyond the middle of February, many teams have to decide which is their priority: the league or the cup and very few can compete in both.

Getafe were one team who took advantage of a tired rival this weekend as they thrashed Valencia 3-0 on Saturday afternoon. The win leaves Getafe third in the league, with a three-point cushion over Atletico Madrid and Sevilla and with a fantastic chance of qualifying for next season's Champions League.

Although Pepe Bordalas' side have undoubtedly benefitted from crashing out in the second round of the Copa del Rey and being able to rest where their rivals have been playing two games a week, that is not the only reason for Getafe's success. Bordalas has built over the past three seasons a side that is compact, hard-working and very hard to score against, while his three strikers, Angel Rodriguez, Jaime Mata and Jorge Molina are a guarantee of goals.

4. Raul de Tomas worth every cent for Espanyol

Espanyol's 1-0 win at home to Mallorca may not have been enough to lift them off the bottom of the table, but it does mean they are just two points away from escaping the relegation zone at the foot of the Liga Santander.

If the Barcelona based outfit do avoid relegation, a good deal of the thanks will have to be for striker Raul de Tomas, who joined for a club record 20 million Euros (around 22 million dollars) last months.

De Tomas has started to pay back that fee with four goals in four league games (including the winner against Mallorca) and he also scored in the Copa del Rey. There is a long way to go this season, but if Espanyol do stay up that January signing will look like a bargain.