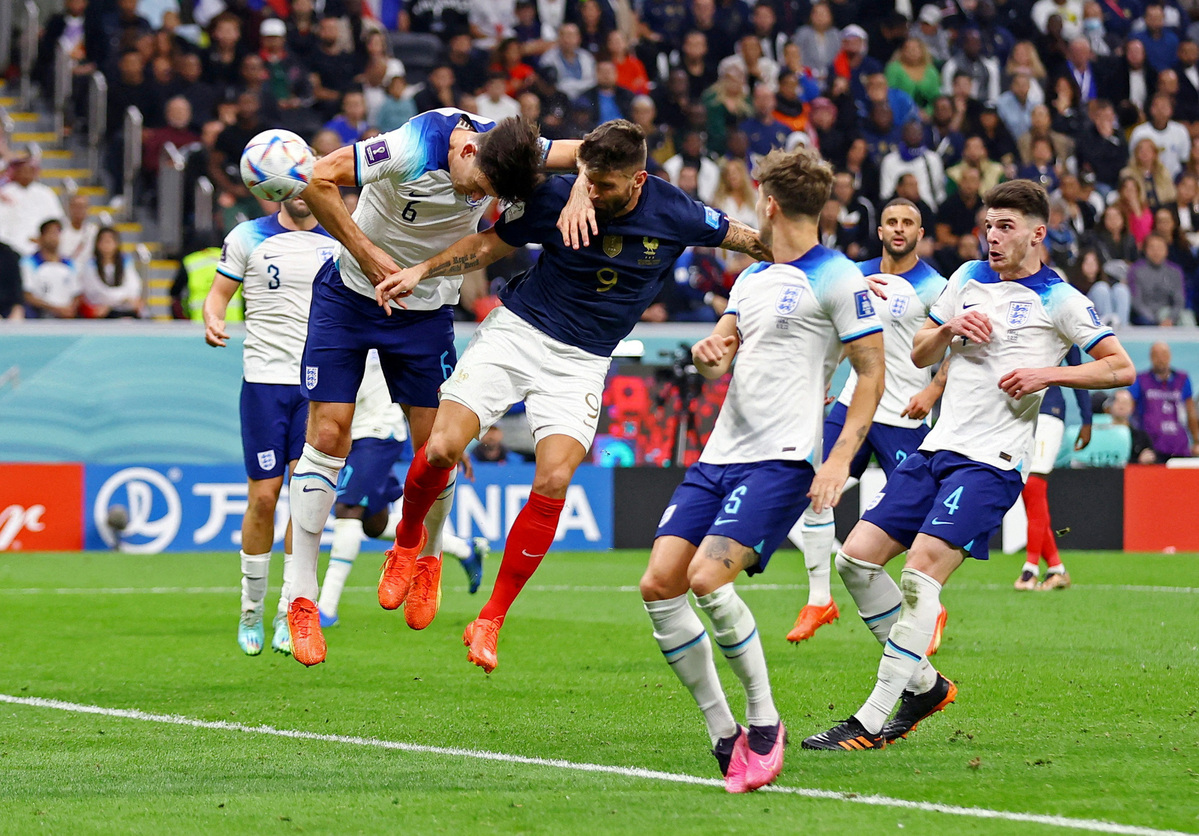 France qualified for the Qatar World Cup semifinal after winning a thrilling game 2-1 over England on Saturday night.

Aurelien Tchouameni's 25-meter shot put France ahead in the 17th minute, before Harry Kane leveled from the penalty spot for England early in the second half.

Olivier Giroud's powerful header in the 78th minute put France back in front, before Kane had another chance to equalize from the spot, but this time the England captain sent his penalty high over the bar.

Both teams were unchanged from their last-16 matches, with Hugo Lloris making a record 143rd appearance for France, while Raheem Sterling was on the bench for England after returning from his visit to the UK following a robbery at his family home.

All the pre-game talk was about Mbappe, but Ousmane Dembele created the first two chances of the game: one which Stones got a heel to, another which the diving Giroud headed weakly at Jordan Pickford.

Antoine Griezmann was at the heart of all of France's good things and he had a decisive part in Tchouameni's opener. Mbappe held off a challenge in midfield, played a diagonal pass to Griezmann, who played in a simple pass for Tchouameni to run onto, take one touch and score with a 25-meter shot beyond Pickford's reach.

England hadn't connected until the goal, but that brought them to life and with Harry Kane twice denied by his Tottenham clubmate, Hugo Lloris. The keeper was quickly off his line to deny Kane from a narrow angle in the 21st minute and was then at full stretch seven minutes later to tip the striker's shot around the post.

The resulting scramble produced an almighty scramble, but France were able to clear.

The half had its alternatives with England looking to play short passes around the French area, while when France had the ball in the England half, the tension was palpable in the stands.

England began the second half strongly, with Lloris tipping over Bellingham's volley and Saka causing problems with a run and shot that was blocked.

In the 53rd minute, Saka again weaved into the area and this time Tchouameni's clumsy challenge brought him crashing down and Kane kept his nerve from the spot to make it 1-1.

Mbappe then caused problems with his first proper chance to run at the defense, but his cross was scrambled clear.

Saka was at the heart of everything for England, who were on top, forcing a free kick that Maguire headed agonizingly wide and then sent Luke Shaw's pinpoint wide under pressure.

At the other end Pickford produced a fine save to deny Giroud, but could do nothing to stop the striker from making it 2-1 from Griezmann's excellent cross.

Kane had the chance to level it in the 83rd minute after Theo Hernandez's needless barge into Mason Mount, but his second penalty of the night went high over the bar and with it England's hopes.