SPORTS From A to Z Cars

From A to Z Cars 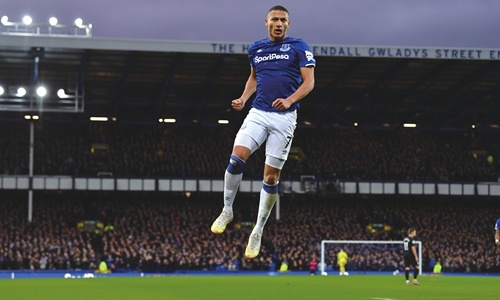 Watford and Everton meet on Saturday afternoon and aside from the traditional 3 pm kickoff - something that happens less often - there will be another tradition on show in the minutes leading up to the game.

The players will enter the Vicarage Road pitch as they do at Goodsison Park to the tune of the Theme from Z Cars - a song best known from the hit 1960s television show, Z Cars.

It was recently brought to the the fore by actor Brian Blessed, one of the stars of the original TV show where he played "Fancy" Smith, but the song's history at Goodison dates back to early in the club's title-winning 1962-63 season. The show debuted in April 1962, portraying the working lives of police in the fictional Newtown, a poor masking of Kirkby, the Liverpool area where the action was filmed.

It was not a tune unknown to the Goodison faithful as it had its roots in the traditional Liverpool folk song Johnny Todd as Blessed sang on social media before his emotional "come on you Toffees" plea. This is similar to Newcastle United fans singing their own version of the local folk song Blaydon Races - and the team coming out to local hero Mark Knopfler's theme tune from the film Local Hero.

The Fritz Spiegl rearrangement used for the show was performed by John Keating and his orchestra and released as a single. It peaked at No.5 on the UK singles charts in April 1962, the same month the show debuted.

It was thought to be introduced because of Colin Welland, the only Liverpudlian on the cast of Z Cars and an Evertonian who took his co-stars to watch.

Despite striking a chord with fans, the song has not been played continuously since. There was a gap in the early 1990s.

It disappeared again at the start of the 1994-95 season when Z Cars was swapped for the theme to 2001: A Space Odyssey. It was an alien concept for Everton fans and the backlash to new chairman Peter Johnson's experiment was swift and severe.

The club replaced it with a version of the Creedence Clearwater Revival hit Bad Moon Rising, a song many clubs' fans had adapted to the terraces in the 1970s, but that proved just as ill-advised. Back to plan A it was, and so Z Cars returned where it remains to this day. Although, there was a time in 2005 where Everton joked it would be replaced as an April Fool's Day prank.

Saturday's visitors Watford have their own history with Z Cars, which was introduced as their own entrance music in 1963 because then manager Bill McGarry "liked it." Form picked up after the song joined the matchday ritual - Watford went 29 games undefeated at Vicarage Road - and it was synonymous with Graham Taylor's glory days in the 1980s.

Much like Everton, though, the tune fell out of favor for a time. In April 2019 it was replaced by I'm Still Standing by former Watford chairman and global pop superstar Elton John. A petition demanded that Z Cars return and so it did.

Sunderland also used Z Cars briefly but the trio is not the only clubs with associations to popular songs. Manchester United swapped Tina Turner's Simply The Best, which had lasted much of the 1990s and early 2000s for local band The Stone Roses' This Is The One, a song linked to the 1999 UEFA Champions League triumph over Bayern Munich. There was also a long period where games ended to the strains of Monty Python's Always Look On The Bright Side of Life.

From the movies to the musicals, Liverpool and Celtic both famously claim the Rodgers and Hammerstein number You'll Never Walk Alone from the musical Carousel. The song may have started out with nothing to do with football but it makes the hairs stand up at both Anfield and Celtic Park.

Less famous, but no less rousing, is the adoption by Stoke City fans of the Tom Jones hit Delilah. The reasons for this remain unclear but they have been singing it since at least the mid-1980s if not a decade before. Although the club do not enter the pitch to the song, it is inextricably linked with the Potters.

No less understandable is the bizarre adaptation of the song Honolulu Baby, a song performed by silent movie stars Laurel and Hardy in their 1933 film Sons of the Desert. Again, the history is murky but there is no doubt that it is a Wednesday song - despite the best efforts of Leeds United and Derby County fans to say "Aloha" to the song as their own.

I'm Forever Blowing Bubbles at West Ham United dates back even earlier. The tune is said to have been introduced by manager Charlie Paynter in the late 1920s but was popularized in the Broadway musical The Passing Show of 1918, released the same year. It remains a constant to this day, despite the club's move to from Upton Park to the London Stadium.

Manchester City, another team with a change in fortunes over the years, have similarly grand musical history. Blue Moon was originally taken on by Crewe Alexandra fans but it is in Manchester where it took on cult status in the 1989-90 season. The song dates back to 1934, and was penned by Richard Rodgers, of Rodgers and Hammerstein fame, with lyrics by Lorenz Hart.

The Blue Moon might make sense for Manchester City, who have since adopted "Moonchester" as their mascot, but the same could not be said for the untropical surroundings of Cambridge.

Despite that, perhaps in spite of that, Cambridge United are the team associated with I've Got A Lovely Bunch of Coconuts. The song was first played by the stadium announcer after a win in the 1950s and the tradition carries on - although there was a break for the Perry Como tune Magic Moments.

Many of the fans won't know that, just as Bristol Rovers fans won't know why they sing Yellowbelly's Goodnight Irene, a folk song popularized by the American singer in the 1930s.

Like other fans, they might not know the story behind the song, but they surely know the tune.