From low to high, Chinese women's basketball team fights back to center stage 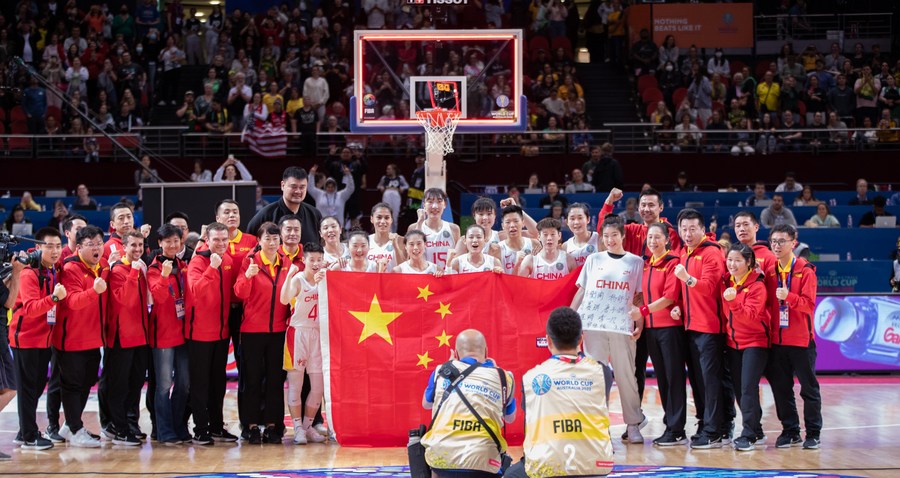 When the Chinese women's basketball players put the silver medals around their necks at the FIBA Women's World Cup medal-awarding ceremony, they might remember a photo on the wall of their training hall in Beijing.

It was a photo of the Japanese women's team celebrating its victory.

The photo was taken in 2015, when the Japanese team won the FIBA Asia Women's Championship, beating the Chinese hosts with an advantage of 35 points in what might be one of the worst defeats for the Chinese team.

At that time, the Chinese women's basketball team was at its lowest point, finishing only the 10th at the Rio Olympics.

"There seemed to be a hurdle for our players to make it into the quarterfinals of world events," said Zheng Wei, head coach of the team.

The hurdle is gone in Sydney.

On Friday evening, China beat Australia 61-59 to enter the final of the FIBA Women's World Cup, formerly the World Championship for Women, for the second time in history, 28 years after it took silver at the 1994 worlds.

Facing a more balanced Team USA, the reigning champions, the Chinese players failed to conjure a miracle in the final, but their progress is definitely worth being proud of.

"We have to try our very best in every match and show the spirit of our Chinese women basketball players," said the squad's leading scorer Li Meng.

"Resolution is the key," said captain Yang Liwei. "It helps you fight until the end."

This is what Xu Limin, former head coach of the team, would like to see when he pinned up the photo of the Japanese team in the training hall as a spur for the players.

In 2018, the Chinese women's basketball players won the gold medal at the Jakarta Asian Games, and defeated their Japanese opponents 87-81 at the World Cup knock-out stage less than a month later.

A stable lineup is another key to victory. The major players, including guards Yang Liwei, Li Yuan, Wang Siyu, Li Meng, forward Huang Sijing, and centers Li Yueru and Han Xu, have been playing together since 2018.

"We have been teammates for years, we rejoiced in victories and felt saddened over defeats together. We have enough experience to work with each other," Li Meng told Xinhua.

In order to tune up better for the World Cup, they also tried to know more about their opponents by travelling to Europe in August. According to Li Meng, they played eight warm-up matches against rivals with different styles.

"When you have more experience, when you are familiar with your opponents, your skills would surely improve," said Shao Ting, former Chinese captain.

This is also what coach Zheng Wei wanted. "This match exposed our problems, from which we could learn more," she said after the final on Saturday. "We are not good enough in confrontation under high pressure, especially in attacking."

Cheryl Reeve, coach of Team USA, who claimed their fourth FIBA World Cup title in a row, said she saw the growth of their Chinese rivals.

"This is a great time for the Chinese women's national team. It's a very, very good team," she told the press conference.

The runners-up placing boosted the confidence of the Chinese players, who are looking forward to going further.

According to statistics on the FIBA website, the average age of the Chinese roster is 26, younger than their major opponents Team USA and the Opals.

"Our coach told us that after accomplishing one goal, you need another. Now we have set up our next goal," said Wu Tongtong.

And the next big stage will be the 2024 Paris Olympic Games.