SPORTS Germany looking for efficiency against Portugal at Euro 2020

Germany looking for efficiency against Portugal at Euro 2020 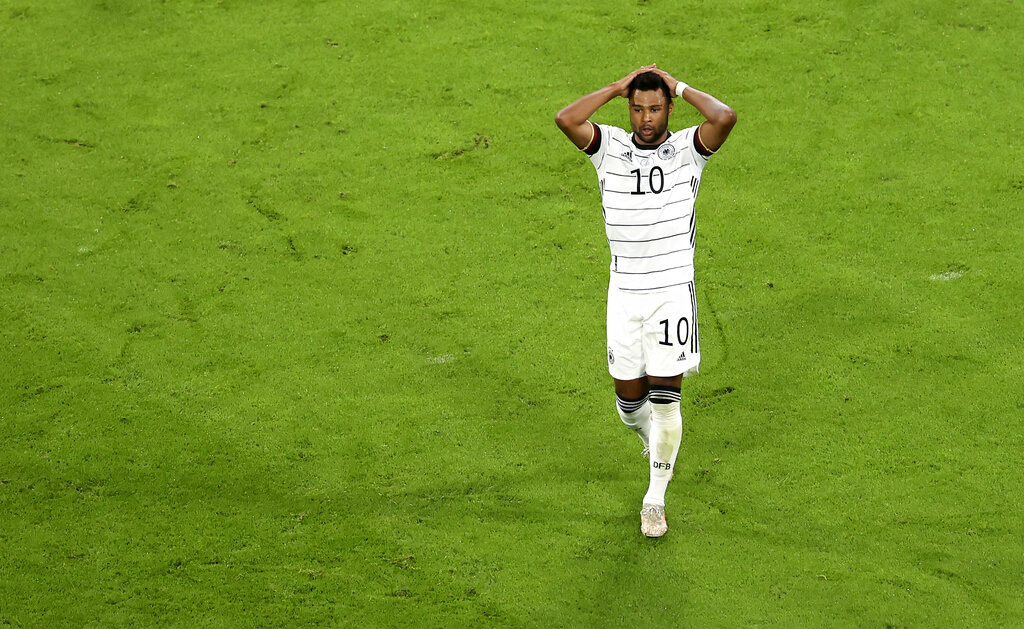 Germany's Serge Gnabry reacts after he failed to score during the Euro 2020 soccer championship group F match between France and Germany at the Allianz Arena stadium in Munich, Tuesday, June 15, 2021. (Photo: AP)

Portugal has the European Championship’s all-time leading scorer in Cristiano Ronaldo. Germany has a team full of players who have never even scored once at the continental tournament.

They will come up against each other on Saturday.

Ronaldo scored two late goals in a 3-0 victory over Hungary on Tuesday to become the tournament’s record holder with 11 career goals. Germany, meanwhile, tried and tried but failed break through France’s defense in a 1-0 loss.

With no goals scored and no points in the standings, the pressure is on Germany to do much better before the team’s final Group F match against Hungary, also in Munich.

“We have zero points. But we still have to keep our heads up,” Germany midfielder Toni Kroos said. “There are still six points to be won. We have to concentrate on those.”

Defending champion Portugal can secure a spot in the round of 16 with a win ahead of its last group game against World Cup champion France.

“It will be a difficult game for us, but for Germany, too,” Portugal playmaker Bruno Fernandes said.

Germany had more possession and its players ran more than France, with 10 attempts on goal compared to their opponents’ four. But France always looked more dangerous and had two goals ruled out in close offside calls.

“The only thing is we didn’t do was score in the end. We weren’t clinical enough and we have to work on this,” Germany coach Joachim Löw said. “But the commitment I saw makes me positive for the next two matches.”

Germany lacks an out-and-out scorer in the mold of Ronaldo, who is the first player to have scored in five difference European Championships, or Poland forward Robert Lewandowski, who broke the Bundesliga’s record for goals scored last season.

Germany does have players that can score goals, however, including Thomas Müller, Kai Havertz, İlkay Gündoğan and Serge Gnabry.

Löw brought on Timo Werner, Leroy Sané and then Kevin Volland in the match against France in what looked a desperate attempt for a goal, but none made any difference.

Müller, recalled for the tournament after scoring 11 league goals and setting up 21 more for Bayern Munich last season, has now played 12 tournament games without scoring.

The Germans also failed to make the most of their set pieces, with two good free kick opportunities and five corners all going to waste.

“We trained many set pieces. Unfortunately we weren’t rewarded for it today,” Löw said after the loss to France. “It’s our job to better that in the next two, three days. On the other hand, France is world champion at defending and the best team at defending standards in the last two or three years.”

For Portugal, Nuno Mendes is an injury worry. The left back had a minor thigh problem and trained individually in the gym on Thursday while his teammates worked together outside.

Germany, though, has more to worry about. Defender Lukas Klostermann injured his right groin in training Thursday, Gnabry took part only in individual exercises, midfielder Jonas Hofmann is still working his way back from a knee injury, and Leon Goretzka has only just recovered from a muscle injury.

“I think,” Löw said of Goretzka, “he will be a good option during the game.”