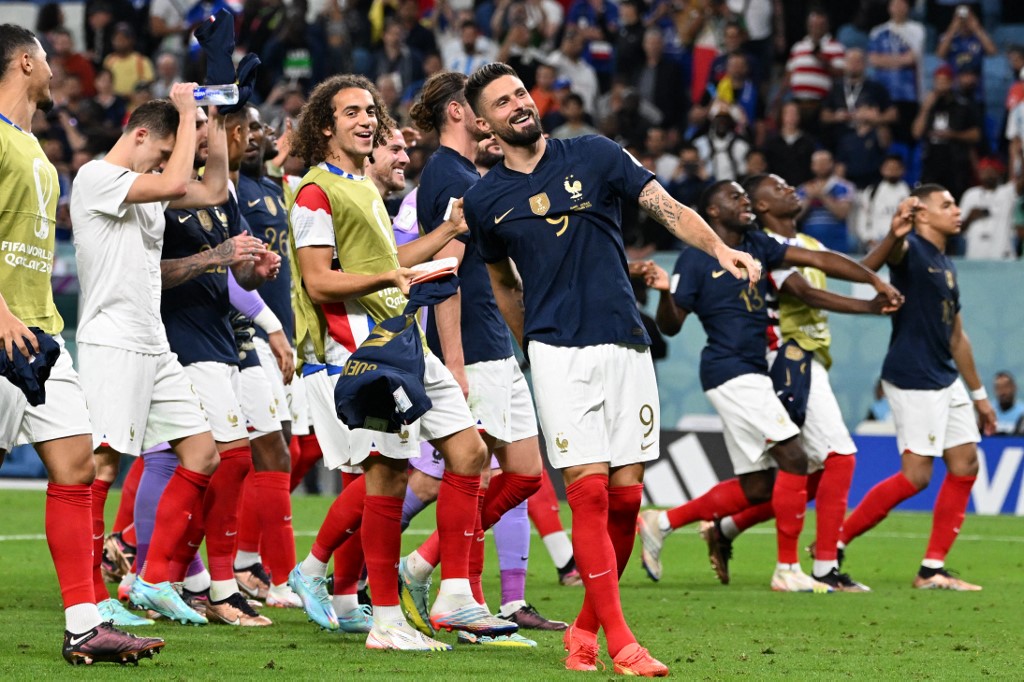 DOHA, Nov. 22 (Xinhua) -- France overcame an early scare before cruising to a comfortable 4-1 win over Australia in the first match of their World Cup defense.

Olivier Giroud scored twice to draw him level with Thierry Henry's record of 51 goals for the French national team on a satisfying night for 'Les Blues' against a disciplined, but technically inferior Australian side.

After Kylian Mbappe and Ousmane Dembele had given them a couple of scares in the opening minutes, Australia steadied and took the lead in the ninth minute.

Mathew Leckie controlled a diagonal pass and cut inside Lucas Hernandez, before crossing for the onrushing Craig Goodwin to smash home at the far post.

To make things worse, Hernandez looked to have torn a groin muscle and was replaced by his brother Theo, further increasing France's injury woes.

Mitchell Duke was inches away from doubling Australia's lead with a 30-meter thunderbolt, but Adrien Rabiot headed France level in the 27th minute when he was given too much space from Theo's ball into the area.

Rabiot turned provider for Giroud to score France's second, after Nathaniel Atkinson's poor touch allowed Mbappe to win the ball and feed Rabiot with a backheel.

The midfielder then carried the ball into the area for Giroud to slide his 50th international goal into an empty net.

Suddenly it was a French monologue, with Giroud seeing a shot blocked, Dembele shooting over and Antoine Griezmann firing wide as France camped in the Australia half, but the worst miss was from Mbappe, who somehow fired over after being set up by Griezmann.

That was nearly a costly miss as seconds later Jackson Irvine hit the post with a header that bounced agonizingly away from the Aussies.

France began the second half with Theo Hernandez putting in two excellent crosses from the left and Giroud was inches away from equalizing Henry's all-time goals record in style with an overhead kick that went just wide.

The reigning champions were happy to take their time after the break, content to control the ball and up the pace when they wanted to.

Griezmann was unlucky to see a low shot cleared off the line, but it didn't matter as Mbappe rose between two defenders to head in the third in the 68th minute from Dembele's excellent cross.

The Paris Saint-Germain forward then turned provider for Giroud to nod home his second of the night and rounded off a solid start for the reigning champions.