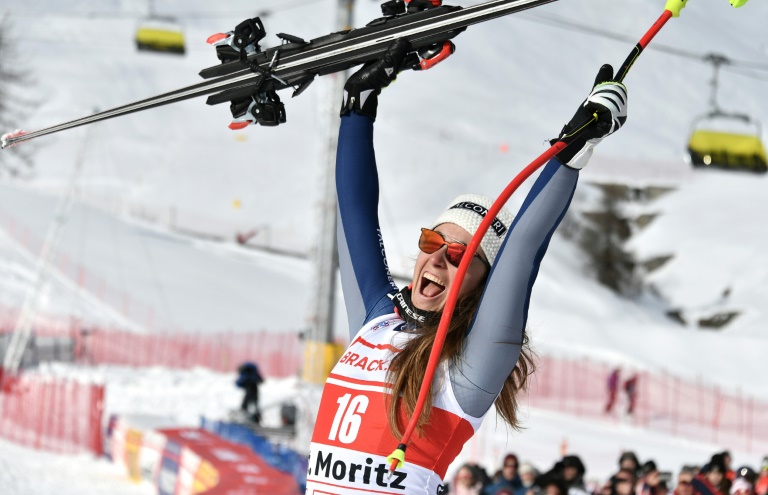 Sofia Goggia finished the St Moritz super-G with only one pole but still won. (Photo: AFP)

Goggia overcame losing one of her poles to clock 1min 12.96sec to edge Brignone by one-hundredth of a second, with American Mikaela Shiffrin rounding out the podium a further 0.12sec off the pace.

"I knew every line and said to myself 'ski, focus on my feet and let it go'," said Goggia, saying she had not been distracted by the loss of her pole.

"I jumped too long and too high... When I landed I lost the pole. Tomorrow is parallel (slalom), so better if I don't lose it then!"

The result will consolidate Shiffrin's place atop the overall World Cup standings, but the 24-year-old -- with six podium finishes in eight events -- is yet to win a speed event this season, having also netted a second place in the Lake Louise downhill.

Shiffrin, who won the world super-G title ahead of Goggia in Are in February, would have had another chance to nail a 63rd World Cup victory and move into second place for individual race wins behind compatriot Lindsey Vonn in Sunday's parallel slalom.

But the US ski team announced she had withdrawn from the event.

Shiffrin, it tweeted, "has opted to sit tomorrow's Parallel event out in order to maintain energy levels and focus for Courchevel's giant slalom and Val d'Isere's speed series".

Speaking of her race, Shiffrin had said "it was really good. The surface was amazing and I had a lot of fun."

The American is the first and only skier, male or female, to win races in all six World Cup disciplines, and the star slalom specialist says she does "not really have a favourite anymore".

"But for sure in slalom it's still where I'm the most comfortable and have the most experience, the best feeling," she said.

"I don't need as much (slalom) training to feel good anymore."