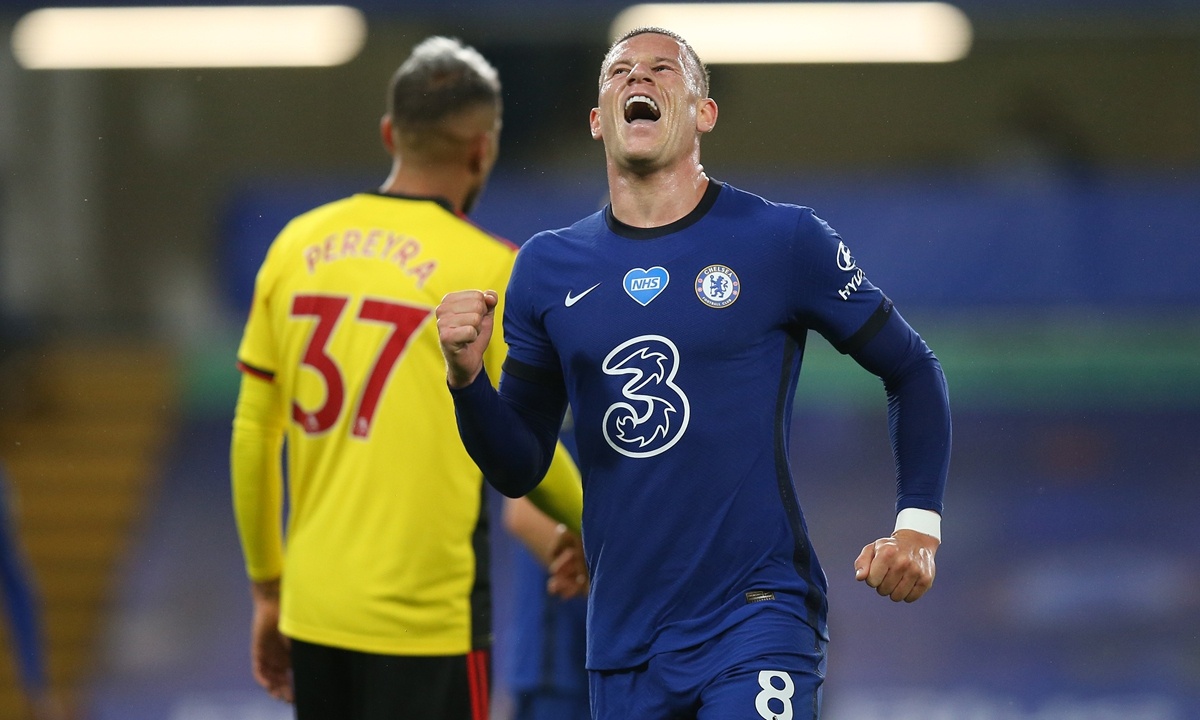 Chelsea held on to their place in the Premier League's top four by bouncing back to beat Watford 3-0 on Saturday after Manchester United briefly powered past with a 5-2 rout of struggling Bournemouth.

Third-placed Leicester also got back on track with Jamie Vardy reaching 100 top-flight goals in a comfortable 3-0 win against Crystal Palace, while Arsenal dealt a blow to Wolves' Champions League chase by winning 2-0 at Molineux on Saturday.

United's fearsome front four of Marcus Rashford, Anthony Martial, Bruno Fernandes and Mason Greenwood, who netted twice, were all on the scoresheet as Ole Gunnar Solskjaer's men hit five goals in a home Premier League game for the first time since 2011.

"Confidence is sky high. You get energy and confidence by performances and results and we are getting that at the minute," said Solskjaer, who is feeling the benefits of a 16-match unbeaten run.

"I have enjoyed the last few games to be honest and it is healthy. You don't age as quickly!"

Bournemouth are moving fast in the other direction as they remain second bottom and the Cherries' defensive problems were quickly exposed after they took a shock 16th-minute lead through Junior Stanislas.

Greenwood got the comeback started as he smashed home from Fernandes' pass before Rashford, from the penalty spot and Martial, with a stunning shot into the top corner, scored their 20th goals of the season,

"Mason is one of the best if not the best finisher I have worked with and seen," added Solskjaer. "He is so calm. He knows where to finish if it is on the training ground, here or in his garden at home."

Bournemouth were given hope when Josh King scored from the spot after Eric Bailly handled inside his own box just four minutes after coming on as a halftime substitute.

But there was no stopping Solskjaer's men going forward and Greenwood restored their two-goal cushion with another powerful drive, this time on his weaker right foot, before Fernandes then capped another influential display with a fine free kick.

Chelsea shrugged off a shock 3-2 defeat at West Ham in midweek with a routine win at Stamford Bridge.

Olivier Giroud was recalled up front and repaid Frank Lampard with a smart finish to break the deadlock before Willian's penalty made it 2-0 before halftime.

Ross Barkley added the third in stoppage time to move Chelsea back two points ahead of fifth-placed United.

"We needed a result after the last game," said Chelsea winger Christian Pulisic. "I think there was an extra bit of energy because of that loss, we wanted to prove a point."

A third defeat in four games since the restart leaves Watford still just one point above Bournemouth and Aston Villa in the battle to beat the drop.

Arsenal kept their hopes of European football next ­season alive moved by ending Wolves' eight-game unbeaten run in impressive fashion to move up to seventh.

Bukayo Saka celebrated signing a new long-term deal last week by hooking in the opener just before halftime and Alexandre Lacazette came off the bench to seal all three points for Mikel Arteta's men four minutes from time.

"Every game you have no margin for error, we know that we try to win every game," said Arteta of Arsenal's top-four chances.

Arsenal face Leicester next on Tuesday, but the Foxes go into that game with a much-needed confidence boost after a first win in five games.

Leicester have struggled to score goals of late, but were helped back to winning ways by some calamitous Palace defending for Kelechi Iheanacho to open the scoring and Vardy to tap into an empty net for his Premier League century.

Vardy struck again in characteristic fashion in stoppage time, sprinting in behind before dinking the ball over the advancing Vicente Guaita.

"To get the two goals and the three points is all you can ask for," said Vardy. "We know it's down to us. We are in this position on merit and we have to keep going. If we play like that between now and the end of the season, we will pick up a quite a few points."

Norwich manager Daniel Farke conceded his side are heading for relegation after a 1-0 home defeat to Brighton left the Canaries still seven points.

"It was more or less our last chance to get back in the mix," said Farke.

"After a few losses, we don't have the right to make any fighting messages or to make any unrealistic claims."