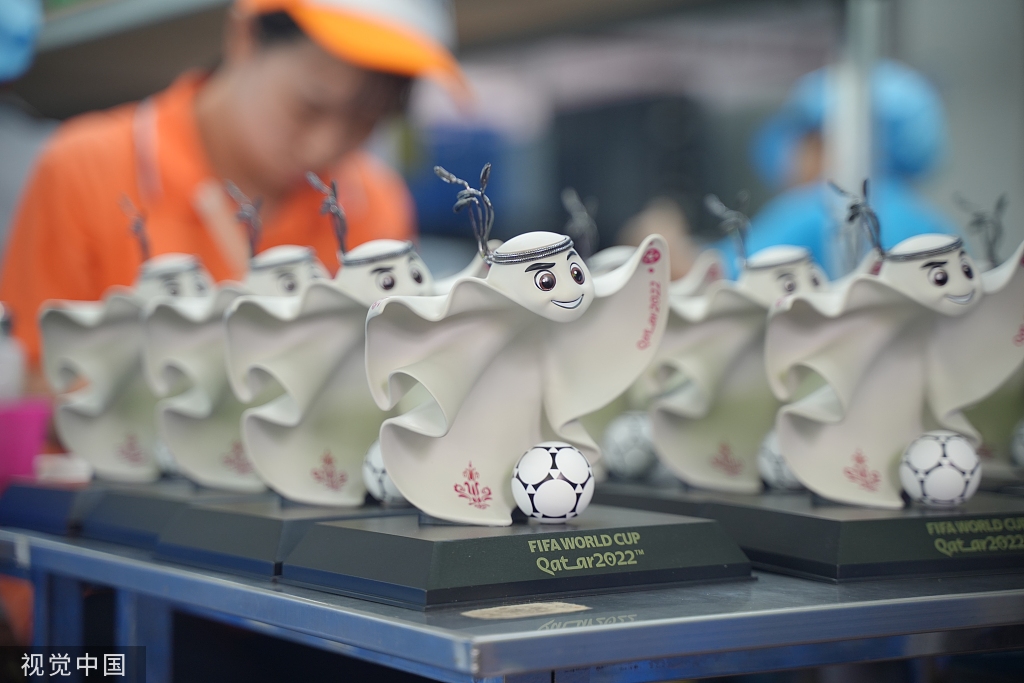 Shipping containers are already filled with official products of the 2022 FIFA World Cup in Qatar, with companies in the manufacturing powerhouse of Guangdong province in South China ready to reap the financial rewards.

In the warehouses of Bowker Yee Sing Garment Factory, based in Heyuan, boxes of jerseys sit ready for transportation to Qatar. The company produces sports and leisure clothing for major sporting goods brands, with its products mainly exported to Europe, the United States and Japan.

"Fast customs clearance has made our products more competitive in the international market since we have become a senior certified enterprise," said Zeng Shisheng, general manager of the company.

According to Zeng, the company has orders for 678,000 jerseys of international soccer teams for the 2022 World Cup.

Heyuan exported 3.28 million jerseys and 4.65 million pairs of sports shoes, an increase of 15 percent and 12 percent year-on-year, respectively, from January to October, with the total value of sporting goods exports exceeding 1.2 billion yuan ($170 million) over the period, according to customs statistics.

The tournament in Qatar has boosted the growth of the global sporting goods economy and is creating business opportunities for a large number of Chinese exporters.

Cheche Cultural Development, a company based in Dongguan, a traditional manufacturing hub in Guangdong, has obtained authorization to manufacture and globally distribute the official mascot and other products for the 2022 FIFA World Cup Qatar. The goods include plush toys and hats, as well as 3D crystal key chains, torches and resin lamps.

It took the company eight revisions of its products' submission to win the approval of the organizing committee and FIFA to design and manufacture the mascot, La'eeb, an Arabic word meaning a highly skilled soccer player.

"The approval was based on cooperation among industrial players in Dongguan, which has a relatively complete industrial chain ranging from design, 3D modeling and proofing to production," said Chen Leigang, general manager of the company.

According to Chen, all participants in the second development phase of mascot-related products are based in Dongguan. "After receiving the graphic design drawing of the mascot from the organizing committee, we started to design and model the shape of the plush toys, and then submit these to factories for 3D printing," he said.

"Winning the approval for manufacturing the soccer event's mascot feels like we secured the rights of organizing the FIFA World Cup," Chen said.

Dongguan's export of toys, including team mascots, increased 20.5 percent year-on-year to reach 29.4 billion yuan in the first three quarters of 2022, while the export of sporting goods and equipment hit 6.77 billion yuan, a year-on-year increase of 19.6 percent, according to local customs data.

Nearly 200 products related to the 2022 World Cup have been made in Dongguan, showing the city's manufacturing strength, according to the local government.

In addition to producing trophy replicas of the World Cup, Dongguan Wagon Giftware is also making souvenirs, including accessories such as keychains that feature the official logo.

The company made 50 products for the 2018 FIFA World Cup in Russia, generating about 200 million yuan in revenue, and expects strong returns from the 2022 World Cup.