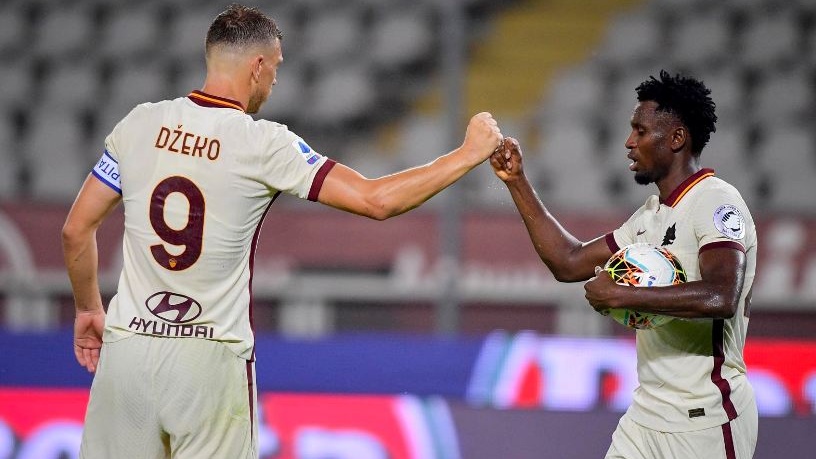 Edin Dzeko and Amadou Diawara during AS Roma's Serie A match away to Torino which they won 3-2.

Guinean midfielder Amadou Diawara netted a second-half penalty as AS Roma edged out Torino in a five-goal thriller at the Stadio Olimpico di Torino in Turin on Wednesday.

Roma came from a goal down to secure a 3-2 win which guaranteed them fifth place and a spot in next season's Europa League group stage.

Alejandro Berenguer gave Torino a 14th minute lead when he latched onto Simone Zaza's through pass, went round Roma goalkeeper Pau Lopez and fired the ball into the net.

Roma hit back two minutes later through Edin Dzeko who side footed the ball home after receiving an incisive first-time pass from Henrikh Mkhitaryan.

The visitors then took the lead seven minutes later as Chris Smalling rose highest to head in Carles Perez's corner from the left for a 2-1 halftime lead.

Roma was presented with a chance to go further ahead when Côte d'Ivoire defender Koffi Djidji fouled Dzeko in the box. Diawara stepped up and scored the resulting spot-kick in the 61st minute to make it 3-1 despite Torino goalkeeper Samir Ujkani getting a hand to it.

It was Diawara's first goal since he joined Roma from Napoli in July on a five-year deal for €21 million.

Torino set up a tense finale as Ivoirian Wilfried Singo outpaced Aleksandar Kolarov on the right and fired a low hard shot which squeezed past Lopez to make it 3-2.

Even with AC Milan, Roma's challengers for that direct qualification spot, winning convincingly against Sampdoria, the 2001 Serie A champions held on to record a vital win which maintained their four-point advantage with one game left to play.

Elsewhere, Sassuolo overcame the disappointment of losing to Napoli in their previous game by thumping Genoa 5-0 at home. Sassuolo had four goals disallowed for offside by VAR and ended up losing 2-0.

Côte d'Ivoire midfielder Hamed Traore opened the scoring for the home side in the 26th minute when he tapped in Domenico Berardi's lob at the far post.

Moroccan midfielder Mehdi Bourabia then set up Berardi to double Sassuolo's lead by cutting in from the right and sending a beautiful curling effort from outside the box into the top corner.

A brace from Francesco Caputo and another goal from Giacomo Rapsadori sealed a 5-0 win which took Sassuolo up to eighth on 51 points while Genoa remained 17th, one place and one point above the relegation zone on 36 points.

Meanwhile, Ivorian forward Christian Kouame set up Federico Chiesa's third goal in Fiorentina's 4-0 win at home against Bologna to climb up to 10th in the league table.

(With input from Italian League-Serie A)