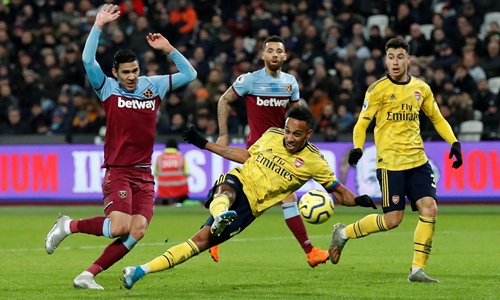 Arsenal caretaker manager Freddie Ljungberg believes a weight has been lifted off his players' shoulders after a three-goal blitz in nine second-half minutes beat West Ham 3-1 on Monday to end the Gunners' worst winless run in 42 years.

Another miserable night for the Swede seemed in store when the visitors trailed at halftime to Angelo Ogbonna's deflected header.

However, Arsenal suddenly sparked into life after Gabriel Martinelli scored his first Premier League goal as Nicolas Pepe finally started to deliver on his club record 72 million pound fee by curling home a brilliant second, before crossing for Pierre-Emerick Aubameyang to secure all three points.

"It means so much for the players. They have been living under enormous pressure and you see it in their performances," said Ljungberg.

"You can see the players have been a bit low and you see in the dressing room the relief and how happy they are."

A first win in 10 games in all competitions lifts Arsenal up to ninth and cuts the gap on fourth-placed Chelsea to seven points in the battle for Champions League qualification next season.

Ljungberg reacted to taking just one point from his opening two games in temporary charge against lowly Norwich and Brighton by making five changes with Martinelli and Pepe among those coming into the side.

Pepe's inability to make an impact has been one of the ­major reasons for Arsenal's struggles, but the Ivorian looked a new player after curling home his first Premier League goal from open play 24 minutes from time.

"Nicolas is an amazing football player, but it is not easy to come from the French league into the Premier League and adjust straight away," added Ljungberg.

"It was an amazing goal and he'll get better and better."

against a West Ham side that have won just once in their last 11 games.

"I think we dominated the game for 60 minutes and after that in 10 minutes we lose the game," said West Ham manager Manuel Pellegrini, who is under increasing pressure as his side sit just one point above the relegation zone.

Another home defeat means the Hammers have taken just one point from their last five games at the London Stadium and the home side were booed off at full time.

"At halftime, Freddie told us to play with a higher tempo," said Aubameyang.

"We have the quality in the squad, and if we believe in ourselves, we can go forward and win games.

"We will take this second half as an example for the rest of the season."