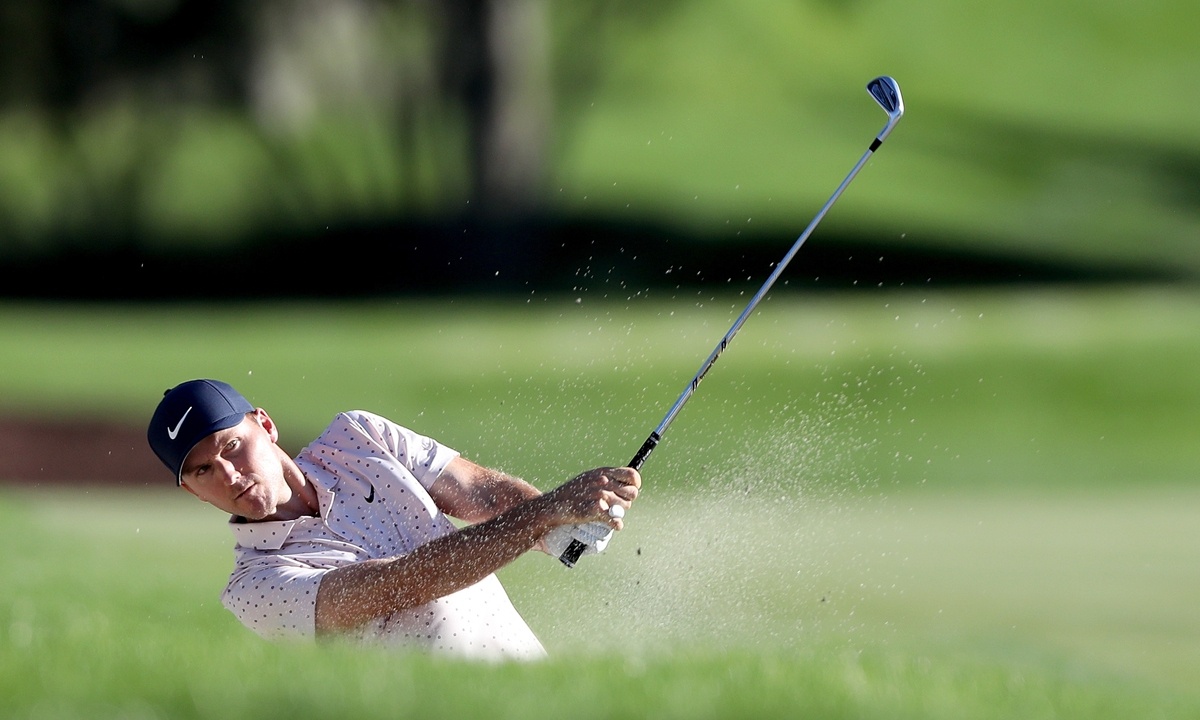 Russell Henley hits out of a bunker on the 15th fairway during the third round of the CJ Cup on Saturday in Las Vegas. Photo: VCG

Russell Henley opened the back nine with three straight birdies on his way to firing a five-under-par 67 for a three-stroke lead after Saturday's third round of the CJ Cup at Shadow Creek.

The 31-year-old American, chasing his fourth US PGA title but his first in 3.5 years, stood on 15-under 201 after 54 holes over the Las Vegas layout.

"I had a nice putting day, made some really nice putts. Kept the ball in front of me and stayed patient," Henley said.

"It's a tough course but if you hit some good shots you can have some chances."

World No.121 Henley plans to keep it simple in his bid to add to a trophy haul that includes the 2013 Sony Open in Hawaii, the 2014 Honda Classic and 2017 Houston Open.

"Just trying to play my game," Henley said. "Gives me confidence to know it's working so well. Hopefully I can keep it going."

Henley dropped a 22-foot putt at the par-four 10th, tapped in from two feet at 11 and sank a four-footer at the 12th to reach 15-under before parring his way into the clubhouse.

"You keep making putts, it makes up for a lot of flaws in your game," Henley said.

Griffin, who defends his only PGA title in two weeks at the Houston Open, ran off four birdies in seven holes on the back nine but closed with his only bogey to shoot 66. He also sank an eagle putt from just inside seven feet at the par-five seventh.

"The putter saved me," Griffin said. "I hit it all right there in the middle of the round, hit some good shots, but kind of the start and the end I struggled a little bit off the tee. But the irons feel good and the putter feels great. It was a fun day."

Eighth-ranked Schauffele, who shared second at last year's Masters and last month's Tour Championship, seeks a fifth US PGA title and his first since last year's Tournament of Champions in Hawaii.

Schauffele, 26, began the day with a three-stroke lead, but struggled to a 74 with two birdies against four bogeys, including at 14 and 17 to fall off the pace.

"Not to be like a sour person, but just one of those days. Today was my bad day for the week, got it out of the way before Sunday, which is nice."