SPORTS Holyfield makes charity comeback at 57 - could Tyson be next?

Holyfield makes charity comeback at 57 - could Tyson be next? 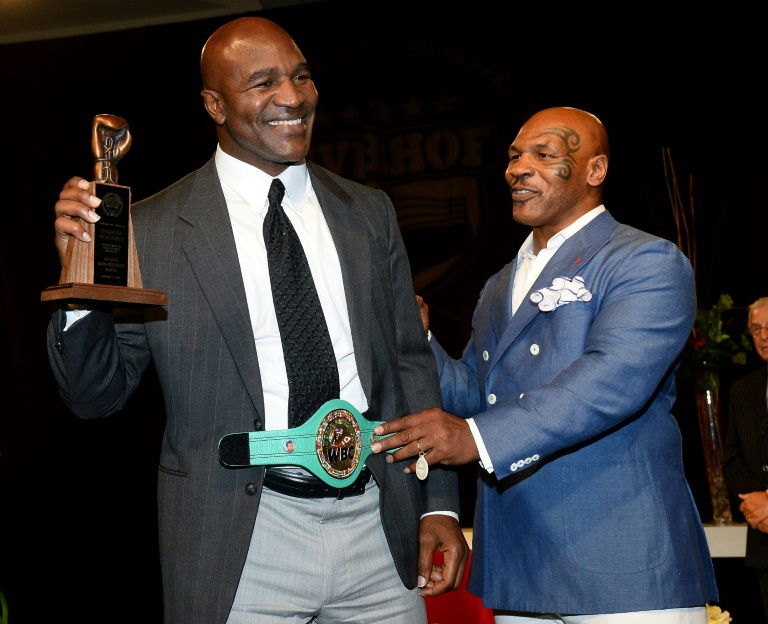 Four-time heavyweight boxing champion Evander Holyfield, left, and former champion Mike Tyson, right, are both looking to fight charity exhibition bouts in their 50s and could wind up meeting in the ring for a third time. (Photo: AFP)

And it could set the stage for a third fight against Mike Tyson more than 20 years after the originals.

Holyfield said he would fight in exhibition matches to raise support for Unite4OurFight, which helps learning and emotional development projects aimed at children whose schooling was disrupted by the deadly virus outbreak.

"Are you ready? The moment you've all been waiting for... The Champ is back!" Holyfield posted on Twitter. "I'd like to announce that I will be making a comeback to the ring. I will be fighting in exhibition matches for a great cause."

Holyfield's move comes after Tyson, 53, was shown training and saying he wanted to make a charity comeback in exhibition bouts.

Holyfield has not fought since stopping Danish fighter Brian Nielsen in the 10th round at Copenhagen in 2011, improving his record to 44-10 with two drawn.

He last owned one of the three major heavyweight crowns in early 2001 after beating John Ruiz for the World Boxing Association title in August 2000.

Holyfield stopped Mike Tyson in the 11th round in 1996 to win the WBA title and then won a 1997 rematch when Tyson was disqualified for biting.

Two of Holyfield's other biggest fights came in 1999 when he fought a controversial draw with Lennox Lewis in New York for the undisputed heavyweight crown, then lost to the British star by unanimous decision eight months later in Las Vegas.

"My name was made on fighting," Holyfield said on the charity's website. "It's time I bring that fighter out with the man I have always been. It's time to step up as citizens need help like never before."