Hot start for IndyCar season at Texas that is usual midpoint 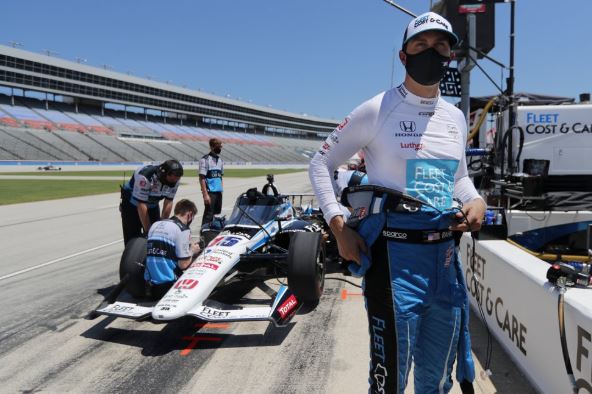 IndyCar drivers finally got on the track, on a steamy day in Texas for what would usually be the midpoint of their season.

Nearly three months after the season was put on hold because of the coronavirus pandemic, the cars had a two-hour practice session Saturday to start an all-in-one-day event. Qualifying was scheduled later in the day before the first race of the season, 200 laps under the lights on the 1 1/2-mile, high-banked oval.

The massive grandstands at Texas Motor Speedway that can seat well more than 100,000 people were empty, and not because of extreme heat — a heat index around 100 degrees Fahrenheit during practice. No spectators were allowed, as will also be the case for the next race on the road course at Indianapolis Motor Speedway on July 4.

Five-time IndyCar champion Scott Dixon, a three-time winner at Texas, had the fastest lap in practice at 215.955 mph. Colton Herta had a fast lap of 214.491 mph.

All of the teams were already in St. Petersburg, Florida, for what was supposed to be the season opener March 15. But there were never any practice laps on the streets of St. Pete, making the fast track at Texas the debut for the protective windscreens now over the open cockpits of the cars.

Texas became the season opener while keeping its originally scheduled date, which was supposed to be the ninth of 17 races. That would have been two weeks after the Indianapolis 500, which has been rescheduled for Aug. 23.

Drivers and team members went through health screenings when they got to Texas Motor Speedway. Many of them had already gone through similar screenings to get on chartered planes they boarded at dawn Saturday in Indianapolis — and will return home on after the race.

Crew members were required to wear face masks, and there was plenty of room for social distancing in the garage areas. Texas used both of its 64-bay garages so the 24 teams could spread out, and there were bigger-than-usual stalls on pit road.

The two-hour practice included 30 minutes early in the session with only series rookies Rinus VeeKay, Oliver Askew and Alex Palou, and Texas first-time racers Jack Harvey and Pato O’Ward on the track.

VeeKay, the 19-year-old driver for Ed Carpenter Racing who won six Indy Lights races last year, crashed during the rookie-newcomer practice. The No. 21 car got loose between Turns 3 and 4, spun and slammed its left side hard against the outside wall. The car settled near the entry of pit road.

“Rookie mistake. I went too low, lost the car,” VeeKay said, adding that team was working to repair the car for qualifying. “Let’s reset and go from there.”

Owner-driver Ed Carpenter slid coming onto the frontstretch later in practice. The car spun, but it appeared Carpenter was able to avoid hard contact to the wall or significant damage to his No. 20 car.

Ryan Hunter-Reay later did damage to his No. 28 Andretti Autosport car with contact against the outside wall coming out of Turn 2.

It took a lot of effort just to get VeeKay, who is from the Netherlands, back into the United States. He was in Europe when IndyCar announced the start of the season. He initially flew to Mexico and spent two weeks quarantining there before being able to travel to Texas earlier this week.

“It was very complicated. First of all, with the borders being closed, only flights going for necessary people, it was tough to make sure, yeah, the borders would open for me. I’ve had many weeks of no sleep,” VeeKay said earlier this week. “But at the end, yeah, everyone really worked extremely hard to make it happen for me. Ed also worked super hard. At the end it was quite a journey going through Mexico and then to the United States. But, yeah, at the end just being here for the race is what matters.”