SPORTS In rarefied air... mountain villagers to lace up boots for Euro 2020

In rarefied air... mountain villagers to lace up boots for Euro 2020 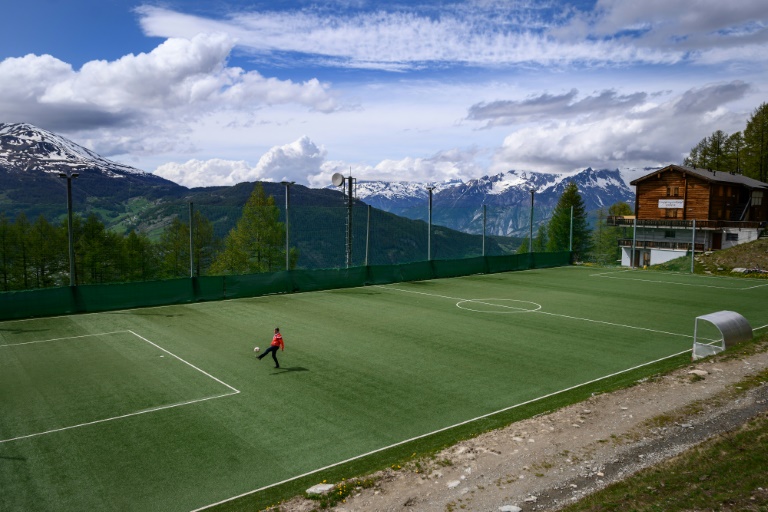 The European Mountain Village Championship is due to return its origins in the Swiss alpine village of Gspon, at an altitute of around 2,000 metres. (Photo: AFP)

Despite the postponement of Euro 2020 because of the coronavirus pandemic, a small Swiss mountain village -- thought to be home to the highest pitch in Europe -- is hoping to stage a scaled-down version of the tournament this summer.

The European Mountain Village Championship dates back to 2008, the same year Switzerland co-hosted the conventional tournament with neighbours Austria, and is set to return to its origins in Gspon.

The competition was the brainchild of Fabian Furrer, a Gspon native and sports magazine editor, who splits his time between Bern and this idyllic village of 585 inhabitants, where in the winter "the ski slopes run across the football pitch".

Perched atop the canton of Valais in the Swiss Alps near Zermatt, Gspon sits two kilometres above sea level and is only accessible by cable car. Its football pitch, which bears the name of former Switzerland and Bayern Munich coach Ottmar Hitzfeld, lies buried beneath snow each year until May.

After the inaugural event won by a team from Spain, the second edition was held in 2012 in Kleinarl, Austria, at an altitude of just over 1,000 metres. French ski resort Morzine most recently staged the tournament in 2016.

Originally planned for June, much like Euro 2020, the "Bergdorf Euro" was also forced to find new dates and pushed back until August 28-30.

"When I sent a message on WhatsApp to all the coaches saying that the Euro would be postponed to the end of August, they replied 10 minutes later and they were all very positive," said Furrer.

"Nobody has the guarantee the tournament can be organised as planned, but we are very optimistic and we make sure everything will be ready."

"For this year, we have fingers crossed. I hope we can travel to Switzerland," said Gary Christian, the player-coach of Peel Saint German, a team from the small seaside town on the Isle of Man.

Nine teams are signed up to take part. Morzine will again represent France, with Kleinarl competing for Austria and Piedimulera, from the Piedmont village in Italy, also set to make the trip.

More surprisingly, the Dutch will be there too, represented by Viljen, a village that claims to be one of the highest points in the country at 200 metres above sea level. Sweden, Germany and Belgium will also send teams.

Participants are required to meet certain criteria. Teams must be strictly amateur and play in leagues between the seventh and 11th tiers in their respective countries "to avoid huge differences in the level of play", says Thierry Marchand, a restaurant owner and coach of Morzine.

'Out of breath quicker'

However, the "mountain village" requirement is slightly more flexible. While Peel tops out at just 100 metres above the Irish Sea, it is an essential part of the famous Isle of Man TT, the hair-raising motorcycle race over the island's hilly roads staged annually since 1907 on the "Mountain Course".

The pitch at Ottmar Hitzfeld Stadium, nestled into the mountainside, is smaller than usual with flat surfaces hard to find and sits next to a steep drop. "If the ball goes over the safety nets, it's gone forever," chuckles Marchand, a former defender and current president of Morzine.

But above all, at this altitude, "we're out of breath quicker," he acknowledged. "And even if we spend the whole year at 1,000m, to play at 2,000m requires great physical condition."

"Playing football in altitude is one thing but the other thing, it's very hot in summer, we can have 30 degrees there. We never experience this on our island," says Peel's Christian, a 40-year-old accountant who supports Manchester United.

"Many players of our team are touching 40 and don't play football regularly any more."

While admitting his team is "thin on the ground in terms of talent", Christian is eagerly awaiting football's return from its virus-enforced hiatus and another chance to represent the Isle of Man, better known for cycling star Mark Cavendish.