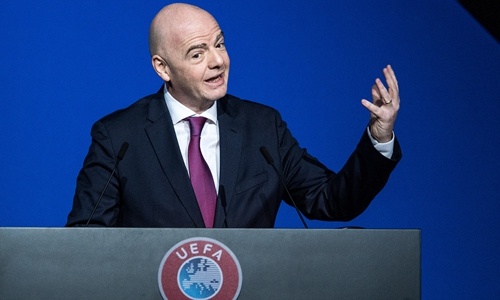 FIFA President Gianni Infantino believes the global coronavirus crisis could bring about a reform of football which he does not expect to return to action by May.

"Without panic, let's face it, we will play when we can without endangering anyone's health," the head of world football said.

"Health first. Then everything else. And the rest, for managers, means hoping for the best but also preparing for the worst."

World football has been thrown into turmoil by the pandemic which has killed 15,000 and confined more than a billion people to their homes.

The Euro 2020 and Copa America tournaments have already been pushed back while uncertainty remains over the inaugural 24-team Club World Cup from 2021.

"We need an assessment of the global economic impact," the 50-year-old Swiss told Monday's edition of Gazzetta Dello Sport.

"We don't know when things will return to normal.

"But let's look at the opportunities. We can perhaps reform world football by taking a step back. With different formats. Fewer tournaments, maybe fewer teams, but more balanced.

"Fewer games to protect the health of the players.

"It's not science fiction, let's talk about it. Let's quantify the damage, see how to cover it, make sacrifices and let's start again.

"Not from scratch. But let's all save football together from a crisis that risks being irreversible."

Infantino revealed he was working on temporary derogations on footballers' contracts to avoid the June 30 deadline.

"Now let's think about the national team calendar, and about temporary changes and dispensations for the regulations on the status of players and transfers.

"To protect contracts and adapt registration periods. Tough measures are needed though. But there is no choice. We will all have to make sacrifices."

"It makes me laugh," he said. "And what else? From what I see, others are already planning and organizing tournaments around the world, outside the institutional structures, and without respect for how domestic, continental and world football are organised.

"In the future we must have at least 50 national teams that can win the World Cup, not just eight European and two South American ones."