SPORTS Inter title hopes all but over

Inter title hopes all but over 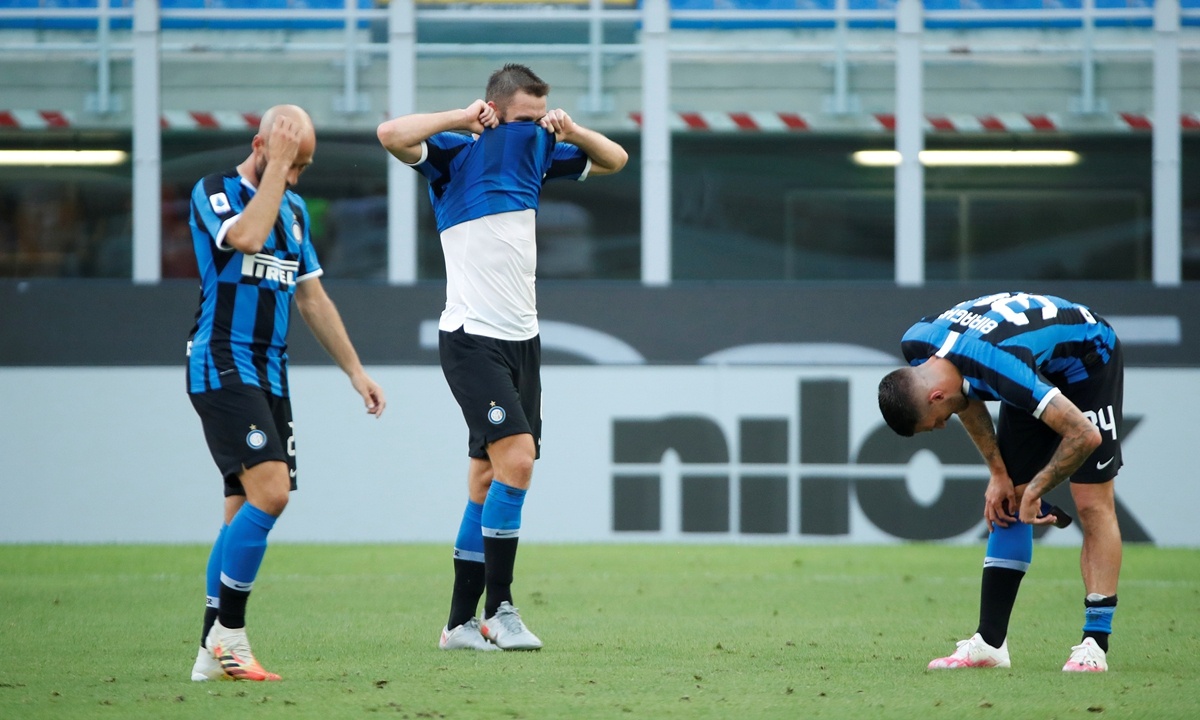 Inter Milan coach Antonio Conte said his team "gifted" Bologna a 2-1 win on Sunday after they blew a goal and a man advantage to see their Serie A title challenge all but ended in dramatic fashion.

Conte's men needed a win to move back to within eight points of leaders Juventus, and one of second-placed Lazio, but despite leading through Romelu Lukaku's 20th league goal of the campaign and playing against 10 men, contrived to collapse to defeat.

Juventus sit seven points clear at the top after beating Torino in the Turin derby on Saturday, when second-placed Lazio were thumped by AC Milan.

Inter, who also missed a penalty when 1-0 up, are now 11 points off the pace with only eight matches of the season remaining and just one point ahead of fourth-placed ­Atalanta who beat Cagliari 1-0.

"It's clear what happened, so there's not much I can say," Conte told DAZN. "We all have to take our share of the responsibility, first of all me as the coach, then the players who step onto that pitch. I think we gifted Bologna the game today and it's not the first time."

The third-placed hosts forged ahead midway through the first half as Lautaro Martinez headed Ashley Young's left-wing cross against the post, but Lukaku was on hand to tap in.

It was the Belgian's 20th league goal since joining Inter from Manchester United last year and his 26th in all competitions.

But Inter were gifted a golden opportunity to take total control 12 minutes into the second half when Bologna midfielder Roberto Soriano was sent off for dissent.

A crucial three points appeared almost certain when Martinez stepped up to take a 61st-minute penalty, but the Argentinian striker saw his ­effort saved by visiting goalkeeper Lukasz Skorupski.

That was the cue for ­Inter, chasing a first league title since winning the treble under Jose Mourinho in 2010, to collapse in the closing stages.

Musa Juwara, on as a substitute, fired home a 74th-­minute leveller through the weak attempted save by Inter stopper Samir Handanovic, before the home side also saw their numerical advantage disappear shortly afterwards as Alessandro Bastoni was dismissed for a second yellow card.

The comeback was completed with 10 minutes left, as Gambian striker Musa Barrow finished off a sweeping Bologna counterattack with a fine shot past Handanovic.