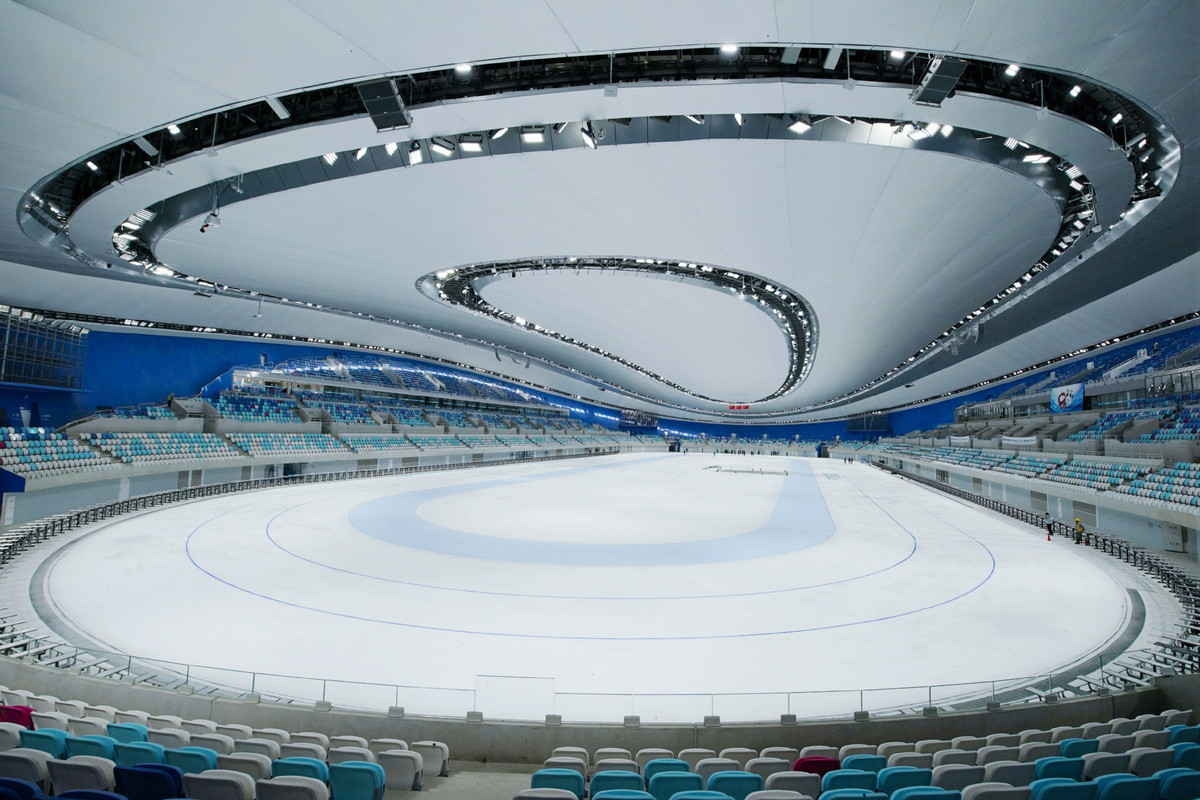 A photo taken on May 8, 2021 shows the inside of the National Speed Skating Oval in Beijing. [Photo/Xinhua]

Despite uncertainties cast by the COVID-19 pandemic, the International Olympic Committee and diplomats from prominent winter sports nations have reaffirmed their confidence in witnessing a successful Winter Olympics in Beijing next year.

Nine months out from Beijing 2022, officials from the global winter sports community have lauded the host's smooth preparations through the pandemic, while placing high hopes on the development of COVID-19 protocols to ensure safe yet exciting Games.

The global admiration for China's preparations was highlighted on Friday during the Games' first diplomatic briefing, where 120 ambassadors and officials from over 70 countries heard reports from Beijing 2022 organizers on preparatory work and the introduction of the international dignitary program.

Beijing 2022 remains open to suggestions from all stakeholders and is committed to working closely with the international community, especially on the development of COVID-19 countermeasures, to deliver a streamlined, safe and splendid Games next year, said Zhang Jiandong, executive vice-president of Beijing 2022.

"We've pulled through the pandemic challenge with effective and innovative approaches to keep our preparatory work on track... we will proceed with caution and an open mind to make sure that everything will be completed on schedule and up to the highest standards," Zhang, also a vice-mayor of Beijing, added at the briefing.

Citing Beijing's pledge to leave a lasting legacy beyond 2022, IOC vice-president Juan Antonio Samaranch said he is impressed by the Games' role in promoting winter sports in China.

"We not only praise your capacity of work, but the legacy that these Games have already started producing even before the start," Samaranch said in a video speech played at Friday's event.

"Everything is ready now. And everything will even be more ready nine months from now."

Those reinforced measures will be implemented during a series of 10 international test events, which will be open to foreign athletes and technical delegates, from October to December.

Non-competition facilities, such as the Olympic Village and Main Media Center, will be finished in the second half of this year, with organizers also busy recruiting and training volunteers, promoting grassroots winter sports participation and finalizing post-Games venue operation plans.

With facilities taking shape, global dignitaries admit expectations are soaring that Beijing will again play the perfect host, having staged the summer Olympics to international acclaim in 2008.

"We're very much looking forward to bringing our sportsmen and sportswomen here and to have a great sports celebration," Wim Geerts, Dutch ambassador to China, said after the briefing.

With a huge market potential to grow after the Games, China's commitment to encouraging 300 million people to participate in winter sports has helped find more common ground for international cooperation, said Geerts, whose country's coaches are working with China's national speed skating team. "From a Dutch point of view, we are very keen and eager to cooperate where we can in winter sports," he added.

As another European ice and snow powerhouse, Switzerland is also looking forward to welcoming China into the winter sports community. Yet, it takes patience and time to build a culture for sustainable success, noted Bernardino Regazzoni, Swiss ambassador to China.

"You have the number (of population), you have the interest and you have the enthusiasm, I'm sure that the Olympic Games will boost all these," he said.

"I am confident you will also have excellence in sports relatively new to China, but I think it has to be planned for decades."