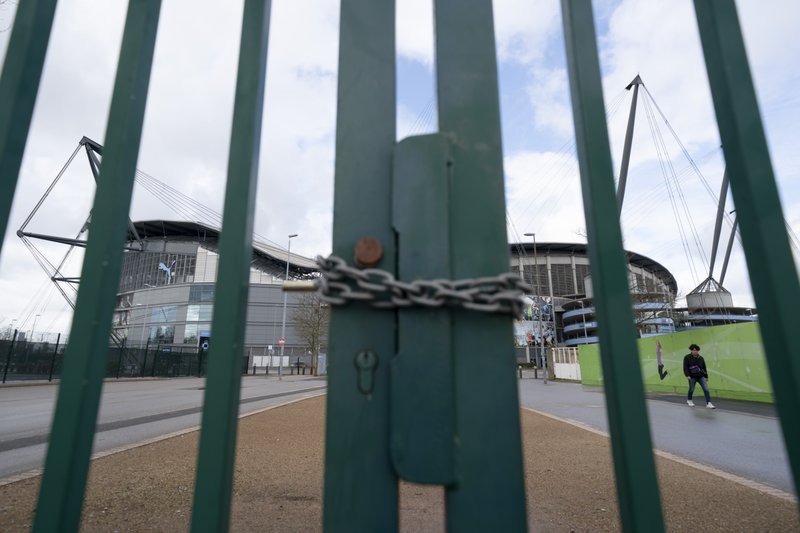 A locked gate is seen by the Etihad Stadium where Manchester City was due to play Burnley in an English Premier League soccer match Saturday March 14, 2020, after all English soccer games were cancelled due to the spread of the COVID-19 Coronavirus. For most people, the new COVID-19 coronavirus causes only mild or moderate symptoms, but for some it can cause more severe illness.(Photo: AP)

The IOC has decided to suspend all Olympic boxing qualifying events until May because of the coronavirus outbreak.

A European qualifier currently taking place in London started on Saturday and was scheduled to run to March 24. It will be closed after Monday’s evening session.

Subsequent Americas and final world qualifiers were scheduled to take place in May.

The IOC boxing task force says it has taken the decision to suspend events “amid increasing global travel restrictions and quarantine measures, in order to allow the participants from over 60 countries to adjust their travel plans and return home.”

The task force says it is evaluating the situation daily with the aim “to complete the distribution of the remaining Tokyo 2020 boxing quota places in May and June.”

The NHRA drag racing series has suspended its season 30 days with the intention to resume events April 17-19 in Houston.

An event at Las Vegas has been postponed with no new date announced.

“We made this decision with heavy hearts as we see the effects this pandemic is having on the world,” NHRA said in a statement. “We are all in this complicated uncertain and rapidly changing situation together, and we encourage everyone to look out for each other.”

Other motorsports such as NASCAR, IndyCar and Formula One already pulled the plug on racing.

The Penn Relays, one of the oldest and largest track meets in the nation, has been canceled in response to the coronavirus pandemic.

The Penn Relays were scheduled for April 23-25 and had been held uninterrupted since 1895. The event celebrated its 125th consecutive running last year. The Philadelphia-based University of Pennsylvania says it will attempt to host a substitute track meet at a later date in late May or early June. The new event wouldn’t meet the standard Penn Relays format. The three-day event would shorten into a one-day event for youth, high school and open runners.

The Penn Relays has adapted to worldwide conditions in the past. The meet was altered in 1917 and 1918 when several colleges, including most Ivy League institutions, curtailed their track programs during World War I. During World War II, travel restrictions reduced participation and spectator attendance while gas rationing was in effect in 1943 and 1944.

A staff member of Canucks Sports & Entertainment has tested positive for COVID-19.

The organization closed its offices Monday and employees were preparing to work from home “wherever possible.”

“We are receiving guidance from the health authorities on next steps,” Carroll said.

The international beach volleyball tour has postponed two more events, clearing the schedule of everything until May 6.

The FIVB says a three-star event that was supposed to take place this week in Gold Coast, Australia, and a four-star tournament next week in Cancun, Mexico, have been postponed because of travel restrictions in response to the coronavirus pandemic. The events are crucial for athletes trying to qualify for the Summer Olympics, with more points available at the higher-rated tournaments.

The FIVB says it is in contact with the IOC about “potentially revising the beach volleyball qualification system” for the Tokyo Olympics.

As of Monday, four of the last nine points-rich four- and five-star events have been postponed or canceled.

NHL players have been told they can return home and self-isolate there until the end of March while hockey is on hold amid the coronavirus pandemic.

This signals a significant update on the league’s potential timeline to resume the season. Commissioner Gary Bettman announced last week the season was on pause and did not provide more specifics on how long that would last.

Players had previously been told to remain in their team’s city and await further direction. The new directive comes in the aftermath of the CDC’s recommendation the U.S. not hold gatherings of 50 or more people for the next eight weeks.

The Russian soccer league has taken a step closer to shutting down after CSKA Moscow canceled its upcoming game with Zenit St. Petersburg.

The league is to meet Tuesday to discuss its response to the coronavirus outbreak. However, CSKA said it was no longer able to host Sunday’s game against Zenit after restrictions on mass gatherings in Moscow were tightened.

CSKA says it will discuss potential rescheduling and refunds for spectators later.

The Russian league was the largest European soccer competition still operational over the weekend, with more than 33,000 fans attending a game between Zenit and Ural Yekaterinburg on Saturday.

One large banner at the match read: “We’re all infected with soccer and will die for Zenit.”

The German soccer league has extended its suspension through at least April 2.

The extension covers the next round of games and the upcoming international break.

League CEO Christian Seifert says “it doesn’t mean that we assume we can play from April 3.”

Seifert adds that some clubs could face potential financial collapse and put “tens of thousands of jobs” at risk without funding from TV broadcasts and sponsors.

Paderborn player Luca Kilian has tested positive for the coronavirus. Three players in the second division also have the virus.

Germany was the last of Europe’s top five leagues to suspend games.

The German soccer federation says that games in the top two women’s divisions and the women’s cup will be suspended through April 19.

British horse racing will take place without spectators and with restrictions on the number of attendees.

The British Horseracing Authority says “the intention is for scheduled race meetings to take place wherever possible.” It adds that “decisions may have to be made to cancel meetings.”

No decision has been made on whether the Grand National Steeplechase will go ahead at Aintree next month. More Britons bet on that race than any other.

The Hungarian soccer federation has temporarily suspended all of its competitions.

Federation spokesman Jeno Sipos says clubs have been asked to forego training sessions and make it possible for players and staff members to stay home.

Sipos says in a video posted on the federation’s Facebook page “we hope we are contributing to stopping the spread of the epidemic.”

The federation’s announcement was in line with a government decision to have sports matches played in empty stadiums and only if organizers took responsibility.

Speaking Monday in parliament, famously soccer-mad Prime Minister Viktor Orban said it would be even better if matches were not played at all.

The women’s professional tennis tour has suspended all competition until May 2 because of the coronavirus outbreak.

The WTA says it is calling off clay-court tournaments in Stuttgart, Istanbul and Prague, adding those to a list of events previously canceled.

Each of those three tournaments was scheduled to begin in April.

The tour says a decision will be made “in the week ahead” about the rest of the European clay-court circuit.

The next Grand Slam tournament is the French Open, which is scheduled to begin in Paris on May 24.

The leader of the IOC’s coordination commission for the Tokyo Olympics says there is no May deadline to cancel the games and he remains confident the event will go ahead despite sports coming to a virtual standstill globally amid the coronavirus outbreak.

John Coates, who will have to go into government-mandated self-isolation when he returns to Australia this week from Olympic business in Europe, told the Sydney Morning Herald newspaper: “It’s all proceeding to start on the 24th of July.”

Former IOC vice president Dick Pound said in an interview with The Associated Press last month that the end of May loomed as a possible deadline for the IOC to make a call on the Tokyo Olympics.

But Coates, an IOC vice president and head of the Australian Olympic Committee, told the Sydney paper in a telephone interview from Switzerland that the IOC didn’t recognize the deadline and he thought Pound had backed away from it, too.

Coates says “it’s never been the IOC’s position. It was Dick’s idea. There is four months to go.”

McLaren says the team member who tested positive for coronavirus at the Australian Grand Prix “is recovering well” and that his “symptoms have gone.”

The British team pulled out of the season-opening Formula One race on Thursday because of the positive test. The race was canceled on Friday.

Fourteen members of the team were also placed in quarantine for 14 days after coming into close contact with the person who tested positive for the virus. McLaren chief executive Zak Brown says they are in “good spirits.”

McLaren says the rest of the team has returned to Britain but will not go to the team’s headquarters for two weeks as a precaution.

With the first four races postponed, the F1 season will not resume until May at the earliest.

Indianapolis Motor Speedway officials say they are holding off on postponing the month of May activities that conclude with the Indianapolis 500 on Memorial Day weekend.

“We are aware of the CDC’s interim guidance suggesting the postponement of events involving more than 50 people over the next eight weeks,” the speedway said in a statement released before 6 a.m. local time.

“Our priority is to do our part in protecting the public health while still conducting the 104th Indianapolis 500 presented by Gainbridge as scheduled on May 24. This continues to be a dynamic situation which we are monitoring constantly in coordination with federal, state, local and public health officials.”

A second team has withdrawn from the Kontinental Hockey League playoffs because of the coronavirus outbreak.

The KHL is widely considered to be the strongest hockey league outside the NHL and is one of the few major sports organizations still operating in Europe.

There are now six teams remaining in an eight-club conference semifinal bracket.

Finnish club Jokerit withdrew Saturday citing concern for the health of its players and staff. Now Barys Astana says it is withdrawing after authorities in Kazakhstan banned sports events and restricted entry to the country.

All six of the remaining teams are based in Russia, where various cities and regions have imposed their own restrictions. Spartak Moscow and Dynamo Moscow played in an empty arena on Wednesday.

The KHL said Saturday it was “in consultation with clubs and all relevant authorities to diligently manage the impact” of the virus outbreak.

The KHL has not commented on the withdrawals and its website still lists those teams as competing. The next scheduled games between teams which have not withdrawn are Wednesday.

The Greek Olympic committee says the Olympic flame handover ceremony for the Tokyo Games will take place without spectators in an effort to contain the coronavirus outbreak.

The committee says the accreditation cards that had been issued for Thursday’s ceremony at the stadium in Athens where the first modern Olympics were held in 1896 would not be valid.

The body’s headquarters will also remain closed from Monday until further notice.

The committee canceled the remainder of the Olympic torch relay last week after crowds gathered in southern Greece to watch part of the torch relay in Sparta, where the torch was carried by actor Gerard Butler.

Greek health authorities have warned people to stay home, and have shut down everything from restaurants, bars and cafes to public organized beaches, ski resorts, hair salons and movie theaters, in an effort to curb the spread of the virus.