SPORTS IOC VP: Tokyo Olympics go ahead even if state of emergency

IOC VP: Tokyo Olympics go ahead even if state of emergency

The IOC vice president in charge of the postponed Tokyo Olympics said Friday the games would open in just over two months even if the city and other parts of Japan were under a state of emergency because of rising COVID-19 cases. 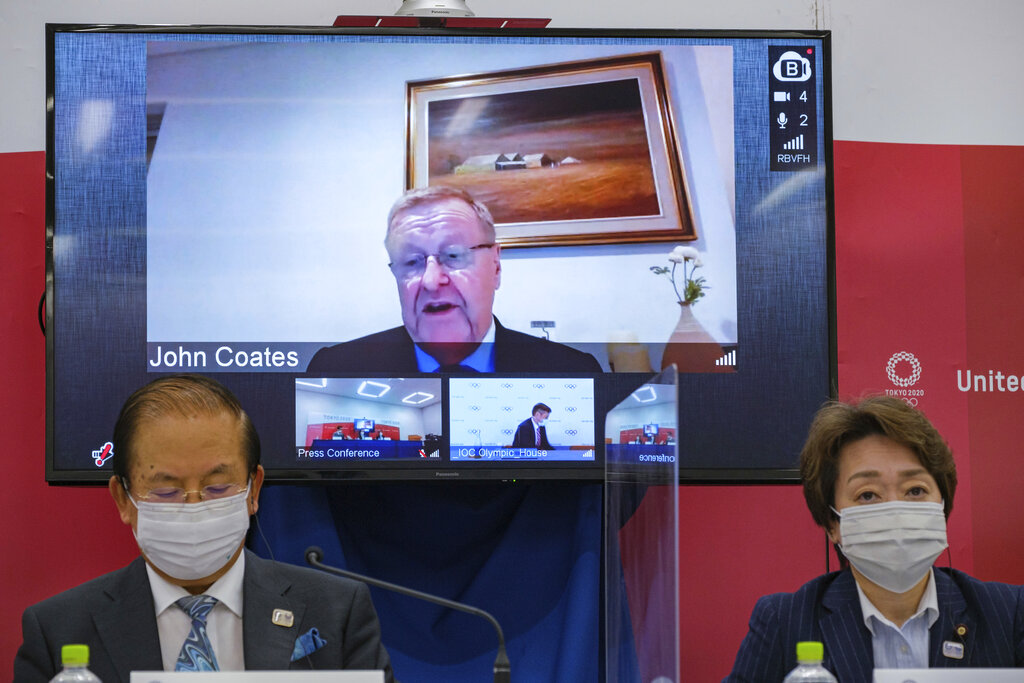 John Coates, speaking from Australia in a virtual news conference with Tokyo organizers at the end of three days of meetings, said this would be the case even if local medical experts advised against holding the Olympics.

“The advice we have from the WHO (World Health Organization) and all other scientific and medial advice that we have is that — all the measures we have outlined, all of those measures that we are undertaking are satisfactory and will ensure a safe and secure games in terms of health," Coates said. "And that’s the case whether there is a state of emergency or not."

Public opinion is Japan has been running at 60-80% against opening the Olympics on July 23, depending on how the question is phrased. Coates suggested public opinion might improve as more Japanese get fully vaccinated. That figure is now about 2%.

“If it doesn’t then our position is that we have to make sure that we get on with our job,” Coates said. “And our job is to ensure these games are safe for all the participants and all the people of Japan.”

IOC officials say they expect more than 80% of the residents of the Olympic Village, located on Tokyo Bay, to be vaccinated and be largely cut off from contact with the public. About 11,000 Olympic and 4,400 Paralympic athletes are expected to attend.

Coates said about 80% of spots in the Olympics would be awarded from qualifying events, with 20% coming from rankings.

Coates left no doubt that the Switzerland-based International Olympic Committee believes the Tokyo Games will happen. The IOC gets almost 75% of its income from selling broadcast rights, a key driver in pushing on. And Tokyo has officially spent $15.4 billion to organize the Olympics, though a government audits suggests the real number is much higher.

Tokyo, Osaka and several other prefectures are currently under a state of emergency and health-care systems are being stretched. Emergency measures are scheduled to end on May 31, but they are likely to be extended.

“If the current situation continues, I hope the government will have the wisdom not to end the emergency at the end of May,” Haruo Ozaki, head of the Tokyo Medical Association, told the weekly magazine Aera.

Ozaki has consistently said government measures to control the spread of COVID-19 have been insufficient. About 12,000 deaths in Japan have been attributed to the virus, and the situation is exacerbated since so few in Japan have been fully vaccinated.

Ozaki warned that if the emergency conditions are not extended, the virus and contagious variants will spread quickly.

“If that happens, there will be a major outbreak, and it is possible that holding the games will become hopeless,” he added.

Ozaki is not alone with this warnings.

“We believe the correct choice is to the cancel an event that has the possibility of increasing the numbers of infected people and deaths,” the letter said.

“At present there are not a few people who feel uneasy about the fact the games are going to be held where a lot of people are coming from abroad,” she said. “There are other people who are concerned about the possible burden on the medical system of Japan.”

She said the number of “stakeholders” coming to Japan from abroad had been reduced from 180,000 to about 80,000. She said Olympic “stakeholders” would amount to 59,000, of which 23,000 were Olympic family and international federations. She said an added 17,000 would involve television rights holders, with 6,000 more media.

She also said 230 physicians and 310 nurses would be needed daily, and said about 30 hospitals in Tokyo and outside were contacted about caring for Olympic patients. Organizers have said previously that 10,000 medical workers would be needed for the Olympics.

Hashimoto said retired nurses might also be called in. Separately, the IOC has said it will make available an unspecified number of medical personnel from unnamed national Olympic committees.

Fans from abroad were banned months ago. Hashimoto said the number of spectators — if any — at venues would “depend on the spread of the infection.” She has promised a decision on venue capacity next month.

Kaori Yamaguchi, a bronze medalist in judo at the 1988 Seoul Olympics and a member of the Japanese Olympic Committee, hinted in an interview with the Kyodo news agency this week that organizers were cornered. She has been skeptical about going ahead.

“We’re starting to reach a point where we can’t even cancel anymore,” she said.

The IOC’s most senior member, Richard Pound, said in an interview with Japan’s JiJi Press that the final deadline to call off the Olympics was still a month away.

“Before the end of June, you really need to know, yes or no,” JiJi quoted Pound as saying.

Pound repeated — as the IOC has said — that if the games can’t happen now they will be canceled, not postponed again.

IOC President Thomas Bach now plans to arrive in Tokyo only July 12. He was forced to cancel a trip to Japan this month because of rising COVID-19 cases.